Not Enough Has Been Achieved 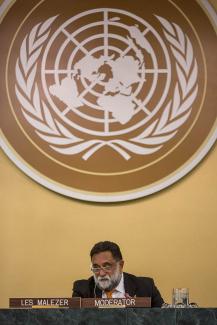 I have been doing this work at an international level for almost two decades now, [and the Declaration] has been a highlight of my career. My involvement at the international level follows from the work I have been doing in Australia, where I was essentially looking at issues of racism and land rights for Aboriginal and Torres Strait peoples. It was impossible to make further negotiations with the government of Australia that was very negative about our rights. That is when I started looking internationally to see what could be done. I actually took formal issues up with Committee on the Elimination of Racial Discrimination (CERD), a treaty body that looks after the International Convention on the Elimination of All Forms of Racial Discrimination. While I was doing that work I came across other meetings that were happening with Indigenous Peoples, and particularly drafting for the Declaration on the Rights of Indigenous Peoples. In mid-1996, I attended my first meeting with the drafting working group and continued every year since then until the Declaration was adopted by the General Assembly in 2007. At that time, I was coordinating the Global Indigenous Peoples Caucus and spent one year in New York to advance the Declaration through the final stages to the General Assembly.

At this stage, 10 years since the Declaration was adopted, I am disappointed that not enough has been done by governments to form partnerships with the Indigenous Peoples. When the Declaration was adopted, we thought this was a change in the political landscape; rather than Indigenous Peoples being suppressed and the government treating them as hostile, that this was an opportunity to come together to form partnerships to get things done. Forming partnerships to advance rights is high on the agenda, but not much has been done, not enough.

And the second part, while there have been constant reports from the governments to improve the health, education, and employment of the Indigenous Peoples, that’s what governments have been planning to do since long before the Declaration. The real issue here is ensuring the self-determination so that the Indigenous Peoples can make decisions for themselves about the future, about their rights to the lands, territories, and resources. Self-determination is another high priority, and again, I don’t think enough has been achieved since the Declaration has been adopted.