No Stoic Indians: Looking Through the Lens at a Today’s Indigenous World 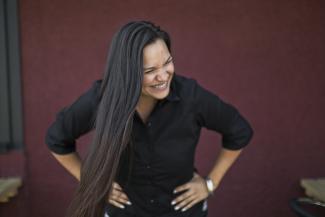 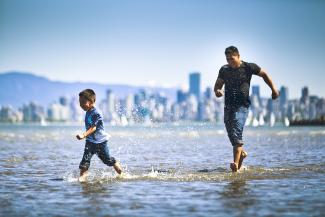 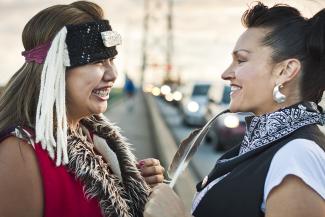 Seen through the lens of Nadya Kwandibens, being Indigenous in a modern world is a beautiful balance. As a Toronto-based professional photographer and Ojibwe/Anishinaabe of the Northwest Angle #37 First Nation in Ontario, Canada, Kwandibens has spent years capturing the spirit of today’s Indigenous Peoples in a manner that highlights the unique way Native identity intersects with contemporary life.

A specialist in natural light portraiture, Kwandibens enrolled in film production studies in college but ultimately chose to pursue a degree in English literature. “I wanted to continue my education in a different area of study in university. It wasn’t until I moved to Arizona five years later that I began to take that passion for photography seriously,” she said in a 2013 interview with No More Potlucks, a bilingual journal of politics, art, and culture based in Canada.

Kwandibens has not shied away from lending her talents to worthy causes. Her work was featured in the Canadian Broadcast Company’s “8th Fire” documentary series and she has been an artist-in-residence for the Native American Indigenous Cinema & Arts online exhibition. In addition to working with countless arts and advocacy groups such as the National Aboriginal Achievement Foundation and the Association for Native Development in the Performing Arts, Kwandibens tours the country each year booking private photoshoots for individuals and leading youth photography workshops.

When asked what advice she would give to a new photographer starting out, Kwandibens believes the best practice is to just “get out there and shoot.” This spirit of active engagement and self-direction is a common thread throughout her work. In 2008, she founded her own touring photography company, Red Works Photography, and immediately began the process of creating her photo series, “Concrete Indians.” This stunning spread of powerful images is an exploration of Native identity as it functions in a modern urban environment. Kwandibens sees this work as a step towards claiming Indigenous identity with pride, explaining that “the series is about decolonization, being aware of it, and strengthening collective cultural identity.” In a 2011 interview with global Indigenous music platform Revolutions Per Minute, she traces the title of her series to a term the older generation from her community uses as a nickname for youth living and working in the city.

The portraits comprising “Concrete Indians” feature Native individuals in a mixture of traditional clothing and modern urban fashion. Set against the stark angles and blunt lines of a modern highrise landscape, Nadya’s subjects stand in brilliant juxtaposition to the chaotic tumult of the city. They appear captured in moments of stillness, self-awareness, and strength. In some photos the viewer catches only glimpses of beading and feathers, while in others the subject stands proudly in full regalia, outshining the suits and sweatshirts surrounding on all sides.

Kwandibens’ images pull Indigenous identity out of the reservation and illuminate the way real people balance heritage with the realities of the here and now. In a recent interview with Canadian Geographic, Kwandibens insisted that she wants her photography to be a more accurate contemporary portrayal of Indigenous Peoples, explaining that she sees the series as addressing “what it means to be Indigenous and living in an urban centre...how living in an urban centre affects your cultural identity as a Native person.”

“Concrete Indians” certainly succeeds in this respect, as Kwandibens’ photographs feel like an unveiling of Native presence, an assertion that Indigenous peoples do not exist exclusively in the pages of textbooks or dusty scenes out of American Western films, but are the people sitting next to you on the subway and working with you in the office. “For far too long society has viewed [Indigenous people] as living in the past—for example, in tepees on vast untouched prairies and riding on horseback—or as seen in the media, news of Indians protesting,” she says. “Concrete Indians” exposes these antiquated notions about the place of the Indigenous by weaving Native stories and identities into the fabric of contemporary urban life.

Beginning in 2012, Indigenous Peoples across Canada united under the banner of the Idle No More movement to protest legislative abuses of treaty rights by the Canadian government. Native individuals took to the streets, forming flash mobs that performed round dances in shopping malls and blocking railway lines between Toronto and Montreal. Kwandibens photographed these gatherings and rallies, capturing the ardent resolve of the protesters in stirring images ablaze with color and emotion. In her remarks to No More Potlucks, she supported the idea that Indigenous philosophies and knowledge can and should inform dialogue on contemporary issues: “It’s a question of identity and pushing collective identity to the forefront,” she said.

In her vision statement for Red Works photography, Kwandibens reflects that “Indigenous people are often portrayed in history books as Nations once great; in museums as Nations frozen stoic; in the media as Nations forever troubled. These images can be despairing. However, my goal seeks to steer the positive course. If our history is a shadow, let this moment serve as light. We are musicians, lawyers, doctors, mothers, and sons. We are activists, scholars, dreamers, fathers and daughters. Let us claim ourselves now and see that we are and will always be great, thriving, balanced civilizations capable of carrying ourselves into that bright new day.” This vision is apparent in Kwandibens’ evocative art, in the way in which her subjects seem to bustle with the vitality and warmth of a community looking toward the future while keeping a finger on the heartbeat of the past.

The Red Works Photography site features images from Kwandibens’ “Red Works Outtakes” series as well as numerous shots from concerts and events. Smiles seem to be a constant in her work. As she explained to Canadian Geographic, “There are no stoic Indians on my website.” For every solemn portrait and leveled gaze, there is a mother laughing with her child or friends with arms entwined. Perhaps this is what makes Kwandibens’ photography so powerful; her portraits capture all the facets and faces of today’s Native people, preserving the struggle as well as the joy.