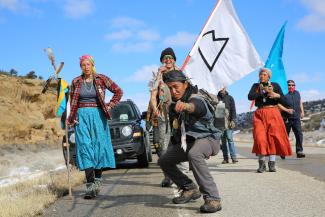 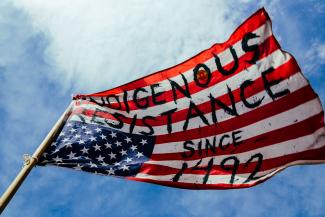 On February 1 on top of Mt. Tzoodził (Turquoise Mountain), one of the sacred mountains of the Navajo/Diné, a group of young Navajo walkers arrived. Their journey commenced 26 days earlier in Grants, New Mexico, and covered 200 miles of the dust-ridden, snowy, and industrially exploited land of Eastern Navajo Agency. It was a walk to reclaim the beauty and balance in the outer and inner landscapes of their ancestral land. Nihígaal Bee Iiná is what they called this walk, and a walk for existence is how they perceived it. This is a story on how it began, progressed, and inspired many in the heart of ancestral Navajo land in New Mexico.

The walk commemorated the 150th anniversary of the tragic Long Walk, during which nearly 9,000 Navajos were forced at gunpoint to relocate to Bosque Redondo, a small piece of arid land they called “The Land of Suffering.” The immediate impetus for the walk was the need to raise aware- ness of the exploitative nature of the mining and fracking industries, specifically the proposed Piñon Pipeline in Navajo territory. If built, the Piñon Pipeline would carry up to 50,000 barrels of oil daily across the Four Corners and Chaco Can- yon region, pumping close to 8 million tons of carbon into the atmosphere every year while polluting the regions’ a quifers and threatening the community’s health. As Dana Eldridge, one of the core organizers of the walk, explained, “We are at the onset of this very large fracking boom. We just really want our communities to know we care...we are also walking to honor the resilience of our ancestors.”

Desperation quickly set in for many of the young activists in the region when lease signing drives were initiated by the fracking companies last year. With high rates of poverty and unemployment it appeared that the Navajo families would have little option but to make way for the fracking oil and gas boom, said Laura Red Elk, one of the walkers. However, many had strong objections to the project, and as the dissension grew, a core group was formed to rally the community against oil fracking. Crowdfunding was engaged to cover the initial expenses, and as soon as the target of $5,000, was met, the walk kicked off.

The Navajo reservation includes approximately 27,000 square miles, occupying portions of northeastern Arizona, southeastern Utah, and northwestern New Mexico. Energy security in the southwestern United States has long been subsidized by the systemic degradation of the community and cultural health of the Navajo families who call this mineral- rich area their home. The proliferation of poorly regulated mines has resulted in tremendous environmental pollution; it is estimated that there are over 520 abandoned uranium mines and over 400 abandoned coal mines in the region. The coal mine that is the highest emitter of nitrous oxide in the US is on Navajo land. The Environmental Protection Agency esti- mates that over 30 percent of the Navajo population lacks access to uncontaminated water. Incidence of cancer is very high on the reservation, and many residents attribute it to mining. Sexual violence, trafficking, and sexually transmitted diseases are also high in areas where mining has boomed.

Nihígaal Bee Iiná walkers set out to document the totality of the situation in their landscape and capture the links between environmental pollution and societal problems. A movement in motion, the walk provided excellent platforms for connecting geographic communities affected by mining across the Eastern Agency on varied themes of community empowerment. Among these themes were education, gender equality, language preservation, and community health. Many dialogues were initiated to counter decades of resource and cultural degradation.

The movement’s leadership openly invited residents of the communities they traveled through to join along the way, resulting in the interweaving of ideas, people, and even art- work into the flow of the journey. Seeds of Peace, a nonprofit organization that facilitates peace-building among youth, pro- vided food for the walkers, and each community meal became yet another opportunity to collaborate on a unified vision of Navajo identity and prescription for future development. As one of the young organizers of the walk, Amber Hood, said, “I had an elder tell me the other day that through these walks we are breathing life back into Hozhó (inner/outer balance), and I think he is absolutely correct. I realized that this is big- ger than fracking, this is bigger than the energy sector, it’s bigger than resource extraction and corrupt tribal government. It’s truly a journey back to our original selves, where with ev- ery walk, hopefully every year that we do it, we are becoming more fluent in our language, we learn more stories about our land and our ancestors.”

The walk interwove the divergent paradigms typically seen within social movements: global vs. local; sacred vs. secular; top-down vs. participative leadership. Emphasizing the larger context, co-organizer Kim Smith noted that the walk was not just for the cause of the Piñon pipeline but also a protest against the larger development paradigm itself, represented by projects including the Pacific connector, Sandpiper, Bluegrass, and Exxon pipelines. According to Smith, the walk is a resolute call for an alternative model of development everywhere.

Another remarkable feature of Nihígaal Bee Iiná is the way the sacred and the secular both found a place in the dis- courses. The walkers engaged in legislative action in Bureau of Land Management meetings and conducted awareness camps at schools and community centers, and also held sacred prayer ceremonies to honor the animals they have historically relied on. The walk through the terrain of the agency was one that evoked powerful experiences for the walkers, who were getting to know their land and people thoroughly. The vibrancy of such an engagement was instantly and effectively communicated via social media through stunning photographs and Facebook updates.

Upon completing the journey, Eldridge said, “When we were at Tzoodził today, I felt this surge of overwhelming positivity. We saw a lot of really bad, terrible things on our journey. Things that hurt physically, emotionally, and mentally. But this journey has shown me that Nihima Nahasdzáán (Mother Earth) really does have the power to heal. Being outside, walking outside, it really does uplift you. Going up the mountain today, that’s all I felt. I wasn’t thinking about the negativity. I wasn’t thinking about how awful all this destruction is. I was just thinking about how beautiful everything is and how thankful and happy I am that I got to experience this.”

This sentiment was reflected by many in the Navajo community. Land is more than just land for the Navajos; it is family—a mother, provider, and sustainer. Mt. Huerfano, where the walk started, is the very place of emergence for the tribe. Mt. Tzoodził, where the walk ended, has deep connotations in the Navajo psyche. A healthy land in the Dinetah is essential for Navajo families to raise their children in the traditional way. By way of Nihígaal Bee Iiná, the Navajo youth of New Mexico showed they are ready for a new model of development: one that combines the wisdom of their ancestors with sustainable systems to ensure economic security. It is indeed a hopeful world when courage and conviction walks with such zeal for the motherland.

— Febna Reheem Caven is an independent researcher and writer on communities in contested environments.