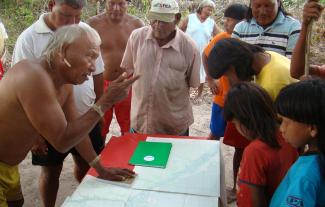 David and Pia Maybury-Lewis developed the idea for Cultural Survival following their experience living among the Xavante Indians in Central Brazil during the late 1950s. David was conducting anthropological field research for his doctoral dissertation. They lived in a Xavante community in Mato Grosso state known to the Xavante as Wedezé (São Domingos) that had only recently established peaceful relations with the Brazilian government. David prepared for his fieldwork among the Xavante by first working among the Xerente, distant linguistic relatives to Xavante who reside in the east (now Tocantins state). He witnessed first-hand the devastation Xerente suffered from their encounters with the larger society and economic expansion into their territory. David and Pia recognized the need for advocacy to support Indigenous Peoples who, like the Xavante, face oppression, discrimination, loss of land and threats to culture as the dominant society and capitalist forces encroach upon them.

In the 1970s, the Xavante were removed from where the lived at the time David did his fieldwork and relocated across the Rio das Mortes to allow private ranchers to develop the land. According to Tsuptó Buprewên Wa’iri Xavante, chief of Pimentel Barbosa village, the relocation from Wedezé was motivated by the presence of non-Indigenous people near the São Domingos post and, from the point of view of the Xavante, was never intended to be definitive. He explained,

“What I hear when the elders tell the story of Wedezé is that they did not know that the move across the river would be permanent. But, when the elders decided to move, it was because the whites at Wedezé were bothering them. . . . And later, when they moved to the current village Pimentel Barbosa, it was because they could no longer return. Why? Soon after they left Wedezé, the white ranchers had already arrived and some had already put horses and cattle to pasture. And the Xavante elders never imagined why there was all this movement at Wedezé. They thought this was very strange.”

After decades of struggle by the Xavante to regain legal rights to their ancestral territory and 12 years of evaluation by the Brazil’s Indian Agency (Fundação Nacional do Índio—FUNAI), on December 26, 2011 FUNAI officially delineated a 146,881 hectare parcel at Wedezé, thus taking the first step towards returning to the Xavante a portion of the land they occupied in the 1950s. The decision to recognize the new reserve was based on an assessment prepared for FUNAI by anthropologists Ricardo Ventura Santos, Carlos E. A. Coimbra, Jr., and James R. Welch from the Oswaldo Cruz Foundation, Rio de Janeiro, with the collaboration of Nancy M. Flowers from Hunter College, and a FUNAI team. The report demonstrated that the area has been continually occupied by the Xavante since the mid-1800s and contains important archaeological, historical, cultural, and environmental resources. Brazilian law requires that the preparation of Indigenous land delimitation reports be done by anthropologists in collaboration with local Indigenous communities. The Xavante community participated in all phases of fieldwork, providing essential information about their history at the site and its ecology.

The December demarcation began a 90-day contestation period, during which a recently formed association of the non-Indigenous land-owners at Wedezé successfully petitioned a district federal judge to impede the demarcation of Wedezé based on the argument that the 1988 Brazilian constitution disallows the expansion of Indigenous lands. The Xavante are outraged at this injunction and have called on FUNAI to challenge it in court. If upheld, final demarcation will be considered by the Justice Department and presentation to the nation’s president for homologation, the status which ratifies Indigenous Peoples’ usufructory rights.

The Xavante people consider this a historic moment in their fight to regain control of their traditional territory and to recuperate the resources they need to sustain their growing population. Xavante oral history tells us that they settled at Wedezé after migrating from the east. According to historians, this occurred in the mid-1800s. As Xavante elders explain, they were a mobile people until they arrived at Wedezé and established their first permanent village, home to the entire Xavante population before it relocated on the other side of the Mortes River and subsequently dispersed. Research shows multiple village sites at the base of Wedezé Mountain and abundant ceramic scatters, marking the first moment the Xavante settled in their current territory. This is the first time that Xavante land near Wedezé, on the east side of this river, have been formally recognized by the Brazilian government. Situated in the interfluvial region between the Araguaia and Mortes Rivers, Wedezé is dominated by murundu grasslands,a distinctive ecological variation of  the cerrado (savanna) biome. Highly threatened by agricultural activities, this vegetation type is noted for its biodiversity and fragility. For the Xavante, these grasslands are important hunting and trekking grounds. Wautõmõ’aba lived at Wedezé as a child and returned in 2009 as an elderly woman. She explained,

“Here at Wedezé, the Xavante used to go on long foot journeys in search of food, even crossing the Rio Cristalino. Our mother took us looking for wild foods near the mountain by the Rio Cristalino. We went there to dig wild yams, which she gathered and put in baskets for us to carry. Our mother made many long trips throughout this region.”

Local ranchers argue that the Xavante do not deserve more land because their traditional practice of hunting with fire causes deforestation. Analysis of satellite imagery from 1990 to 2005 conducted in collaboration with the Anthropological Center for Training and Research on Global Environmental Change, Indiana University, Bloomington, in fact, shows that Xavante management of the cerrado landscape was responsible for the recuperation of extensive forests that were cleared by ranchers in the 1970s. According to Xavante elders who contributed to the demarcation report, recognition of their heritage at Wedezé is not only a matter of ecological sustainability or historical antecedence, but also derives from their social and spiritual connection to the location. The previous villages and campsites at Wedezé, now evidenced only by scattered archaeological remains, are remembered as the places where elders and ancestors were raised by their parents, ritually initiated into adulthood, and ultimately buried. The murundu grasslands and the lagoons that border the rivers are also valued locations to obtain bird feathers required in ceremonies and, where, of special note, a sacred substance with the power to cure any illness, attract powerful spirits, reduce pain, and strengthen a person’s energy is found.

When the Maybury-Lewises visited Wedezé in 1958, the entire local Xavante population resided in a single village of 220 people. The population has grown and divided into 10 villages. Nine of these are located in the adjacent Pimentel Barbosa Indigenous Reserve, where the people were relocated in the early 1970s after their land at Wedezé was sold to private interests, and one is located in the Wedezé Indigenous Reserve. Growing at a rate of 5 percent per year, the population has been doubling every 14 years. The current population, derived predominantly from the original village, now numbers about 1,400 people.

Xavante have continued to use Wedezé, despite its formal exclusion from their recognized lands, to sustain their people, to hunt, gather food, obtain items of ceremonial value, and visit the graves of their ancestors. In 2009, the first collective wedding hunt was held at Wedezé, marking the first time that ceremonial activities were resumed here after many years. This was a highly emotional event for Xavante elders, who remember participating in wedding hunts at Wedezé as youth, and for young people, some of whom had not previously visited this important place. Pia Maybury-Lewis expressed great joy when she heard the news that the Xavante could regain their rights this piece of land, a victory that both she and David had hoped would transpire for years. Although the enthusiasm of Xavante leaders was tempered by the recent legal injunction, they express resolve in their committed to appealing the decision and having their rights to Wedezé recognized.