A New Mandate: UN Expert Mechanism on the Rights of Indigenous Peoples 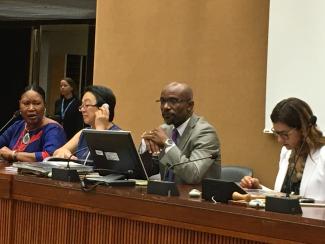 The new mandate now permits suggesting thematic studies solely based upon EMRIP’s decision; encourages EMRIP members to visit two states annually; coordinates an annual agenda with additional global actors to promote and protect the rights of Indigenous Peoples through facilitating dialogue; and provides direct access to the UN Human Rights Council. EMRIP now can now ask questions and obtain answers and publicize its findings broadly, while previously its main task was to prepare an annual study on a topic chosen by the Human Rights Council.

Additionally, EMRIP now has the mandate to request information from relevant parties and has both authority and funding to conduct country visits. It can provide technical advice regarding domestic legislation and policies relating to Indigenous Peoples and can report to the Council as needed. While the EMRIP chair continues under the leadership of Albert Barume, the Africa representative, the gender gap is gone, with four of the seven members being women human rights defenders. The Arctic and Pacific joined the traditional five regions at EMRIP, following the model of the UN Permanent Forum on Indigenous Issues.

At the most recent 10th session, the core challenges facing Indigenous communities were aggressive development, business intrusion, and climate change. Signaling the importance of the new mandate, the UN High Commissioner for Human Rights, Zeid Ra’ad Al Hussein, opened the session with a Cree proverb: “Only when the last tree has died, the last river has been poisoned, and the last fish has been caught will we realize we cannot eat money.” Hussein recognized the contribution of Indigenous Peoples to confront our current challenges, stating, “We are reaching the limits of the planet’s capacity to sustain damage. Indigenous Peoples have deep knowledge we would do well to heed. We must safeguard the wisdom.” EMRIP organized an ambitious agenda to offer assistance and advice to achieve the ends of the Declaration. On Tuesday morning, seizing upon paragraph 11, which calls for cooperation with National Human Rights Institutions, an interactive dialogue was held on Agenda Item 5 with representatives from Nepal and Mexico sharing examples of their engagement to implement the Declaration. EMRIP also hosted representatives of the regional human rights mechanisms from the Americas and Africa to share important cases in the commissions and courts. A core challenge is the role of corporations denying Free, Prior and Informed Consent and pursuing profits at the expense of Indigenous Peoples and the planet.

The conversations continued into the record number of side events. At one side event, on Indigenous Peoples’ Rights and the Impacts of Extractive Industries in the Americas and in Africa, the UN Special Rapporteur on the Rights of Indigenous Peoples, Victoria Tauli-Corpuz, noted, “I look forward to the day when the UN creates an instrument to deal with extraterritorial obligations for companies to respect, protect, and remedy. There is still a long way to go.” Barume agreed, “This is a global problem. It will require a global solution.”

Agenda Item 6 focused on the Ten Years of Implementation of the UNDRIP: Good Practices and Lessons Learned, and EMRIP invited the UN Permanent Forum on Indigenous Issues Chair and Tauli-Corpuz to share suggestions. EMRIP’s location of Geneva was also utilized to reach out to important international human rights institutions of the core treaty bodies. The UN Human Rights Committee focusing on civil and political rights, and the UN Committee on the Elimination of All Forms of Discrimination Against Women each shared recent developments relevant to human rights of Indigenous Peoples and jurisprudence relating to individual cases reviewed through the Optional Protocol of each treaty, along with national reviews of States’ regular reporting on their human rights obligations. This is an example of EMRIP’s expanded role to facilitate dialogue to ensure fundamental freedoms for Indigenous Peoples.

The week concluded with EMRIP’s adoption of proposals for the UN Human Rights Council. Beyond Indigenous Peoples’ participation as outlined in the Declaration, EMRIP focused on protection of Indigenous human rights defenders in light of the increase in violence and gross violations against them. EMRIP also focused on the UN Sustainable Development Goals, urging states to support community-based monitoring and citing the importance of data to measure the global goals. National action plans were called for to achieve the Declaration, including treaty body recommendations. EMRIP also noted the Universal Periodic Review process, calling for the Declaration to be explicitly included in lists of standards for future sessions. Finally, ideas were shared for the 2019 Year of Indigenous Languages in partnership with UNESCO and contributions were solicited for the UN Voluntary Fund on Indigenous Peoples.

The main purpose of the new mandate is to enhance engagement in the United Nations Human Rights Council for Indigenous Peoples as well as foster partnerships among policymakers at the State level. The main challenge for EMRIP with its new mandate was summarized by Hussein in his opening remarks: “How can we bridge what we say in rooms like this one with the daily grind Indigenous Peoples are forced to live?” EMRIP aims to accomplish this task through analysis, advice, assistance, activities, awareness-raising, and rights advocacy. It aspires to build a bridge of trust between Indigenous communities, country institutions, and business circles by utilizing the full techniques outlined in Res 33/25 to unite all actors to realize Indigenous rights as it develops its role as a conductor of conversations and campaigns.

The Path to a New Mandate
The movement behind the mandate expansion was crystallized at the Global Indigenous Peoples Conference in Alta, Norway, in 2013, based on the regional preparatory process. The conversation continued at the UN World Conference on Indigenous Peoples in the 2014 Outcome Document, specifically paragraph 28. Indigenous Peoples maintained pressure on States to ensure the UN Declaration on the Rights of Indigenous Peoples could be exercised in UN member states with a resolution drafted at the United Nations Human Rights Council, coordinated by Mexico and Guatemala, which resulted in adoption of resolution 33/25 in September 2016.

—Joshua Cooper is lecturer at the University of Hawaii at Manoa Center for Pacific Island Studies and director of International Network for Diplomacy & Indigenous Governance Engaging in Nonviolence Organizing for Understanding & Self-Determination (INDIGENOUS).