A New Era of Exploitation? Mining Sami Lands in Sweden 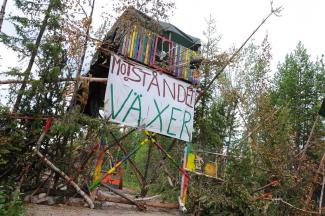 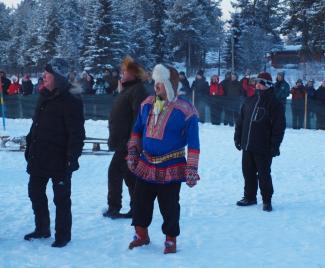 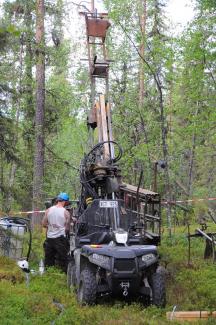 A dirt road leads deep into a thick forest of pine and spruce some 25 miles west of the small town of Jokkmokk, in Norrbotten County, in Sweden’s far north. Beard lichen, an indicator of the pure air quality, hangs thickly from the branches while Siberian and Eurasian jays dart between the trees harboring a bounty of berries.

Turning left at a sign for Kallak, the sound of heavy machinery operating suddenly cuts through the stillness of the forest. A bit further in lie a dozen test pits stripped bare of vegetation and ready for dynamiting. In the middle of a pit is a reindeer, oblivious to the rich deposits of iron ore in the bedrock underneath.

In this remote corner of Sweden above the Arctic Circle, a battle line has been drawn over the proposed Kallak iron mine, pitting environmentalists and the region’s Indigenous population–the Sami, who number around 20,000 in Sweden —against those in favor of mining as a means of boosting jobs and revenue.

Keen to cash in on the region’s resource wealth is the British-based mineral exploration company Beowulf Mining, which, through its Swedish subsidiary Jokkmokk Iron Mines AB, has applied for an exploitation concession for the Kallak North iron ore deposit. Noted as an Area of National Interest by the Swedish Geological Survey, the company announced an indicated resource base of 118.5 million tons—one of the largest deposits in Sweden not yet to have been exploited.

With a population in long-term decline and a dearth of steady employment opportunities, mining is seen by some as a lifeline for northern inland communities. Others are skeptical that the mine will deliver the promised jobs and benefits, and also fear the ecological risks of contamination and waste. The debate has split the community. It is, however, the minority Sami population, the original custodians of this land, who stand the most to lose.

The Sami have inhabited the northerly reaches of Scandinavia and the Kola Peninsula in Russia (a place they call Sápmi) for thousands of years, living off the land and its resources as pastoralists and hunters. While the Sami today live in modern houses and have other jobs, for many Sami in Jokkmokk reindeer herding remains a cornerstone of their culture, identity, and economy.

The proposed mine not only lies on an important spring and autumn grazing ground for the Sami’s reindeer, but it would also require an upgraded road and rail infrastructure to get the iron to the Swedish port of Luleå and the Norwegian town of Narvik on the Atlantic coast. The Sami community is adamant that if the mine goes ahead, it will endanger their livelihoods.

“It could be devastating,” says Jonas Vannar, reindeer herder and vice-chairman of Sirges Sameby, one of the three Sami reindeer herding communities affected by the mine. “In reindeer herding it is crucial for the reindeer to be able to migrate. We’ve seen the negative impact in other places where there are mines . . . and this area is precisely between the winter and summer pastures. [A railway] will cut off the migration routes.”

The Norrbotten County Administrative Board took the view that an exploitation concession should not be granted with specific reference to chapters 3, 4, and 6 of Sweden’s environmental code, concluding that the damage mitigation measures proposed by Beowulf would not change the fact that reindeer herding would be severely affected by the mine.

Worst affected would be the herding community of Jåhkågåsska Tjiellde, whose territory would be cut in two. Its chairman, Jan-Erik Läntha, is unequivocal about the mine’s potential impact: “This location is particularly sensitive. It would be a big area affected with a lot of disturbances, reducing valuable winter pasture ground for the reindeer, preventing their ability to roam, and also negatively affecting the gathering of the reindeer and migration, especially in the spring season.”

Vannar also fears that the mine could affect the livelihoods of hundreds of Sami who depend on reindeer herding. “The grazing pastures for the reindeer have already grown smaller…it’s hard to say when a point of no return is reached. But with this mine, I personally fear that it will affect my survival as a reindeer herder,” he says.

Of further contention is the fact that the mine is located just 50 miles away from Laponia, only one of a handful of places in the world designated as a UNESCO World Heritage Site both for its natural value and cultural importance. “If access to and from our summer pastures is impeded because of this mine, that undermines the cultural basis on which Laponia was chosen as a World Heritage Site,” Vannar says.

Other exploration permits for mining exist throughout the municipality. “Definitely, if there’s one open pit mine, there could be another two, three, four, five mines,” admits Jokkmokk municipal chief executive Anders Nygårds. And while environmental regulations are strict in a region dominated by a patchwork of national parks and nature reserves, a study commissioned by Beowulf Mining (which holds eight additional exploration permits) noted that exemptions could apply if deemed in the “public interest.”

It is not only the livelihoods of the Sami that are stake, but the right to determine how their land should be used. In May 2014, the Sami Parliament called for a moratorium on all exploitation in Sápmi, stating that “all natural resources above and below ground within the traditional Sami land areas belong to the Sami people [and] no decision can be taken without the consent of the Sami parliament and communities involved.” Yet Sweden is conspicuously absent from the list of countries that have ratified ILO Convention 169, a legally binding instrument that recognizes Indigenous land rights. And while Sweden is a signatory to the UN Declaration on the Rights of Indigenous Peoples, its implementation of the articles relating to land, water, and natural resources remain controversial.

Some worry that Sweden may be on the threshold of a new era of exploitation with a mineral strategy outlined by the previous government that envisages tripling the country’s number of active mines from 16 to 47 by 2030. Many of these mines are located on Sami lands, a “resource Eldorado” that for decades has provided the majority of the country’s hydropower and is already the site of Europe’s largest iron and copper mine. Kallak could be the thin end of the wedge in a region that is seen as ripe for development. Less than 150 miles to the southwest at Rönnbäcken in Västerbotten, Vapstens reindeer herding community has reported the government’s decision to proceed with a nickel mine to the UN Committee on the Elimination of Racial Discrimination.

Läntha is adamant that more needs to be done to protect Sami rights. “There has to be greater awareness of and priority attached to Sami culture and reindeer herding and its needs and interests. If we always have to compete with short-term economic thinking, then we are going to lose. We believe that in the long term, the preservation of reindeer herding and the environment would be more valuable,” he argues.

Unable to determine whether the Sami reindeer herding communities affected could be able to continue reindeer herding at a “manageable level,” the Mining Inspectorate of Sweden referred the decision regarding the Kallak mine to the Swedish government in February 2015. The decision expected this fall is a litmus test for the future and signal of the intention of the new government, and whether it is genuinely committed to safeguarding the rights of the Sami to determine the development of their lands.

As birch leaves shimmer lemon-yellow with the onset of fall, an uneasy calm settles around Jokkmokk as all sides await the government’s decision. It’s an especially nervous wait for Vannar, Läntha, and the communities they represent. “Reindeer herding has already suffered a lot of blows over the decades and this has been a long struggle,” Vannar says, adding defiantly, “but I just know that we will not give up.”

— Alec Forss is a writer and editor with a focus on adventure, environment, politics, and culture. He lives in Stockholm, Sweden. His website is: www.alecforss.com. 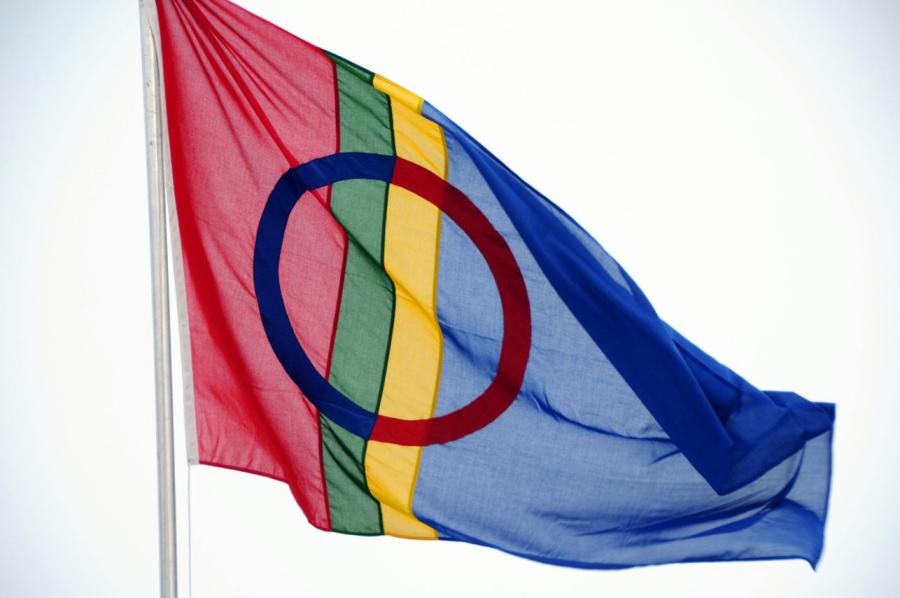