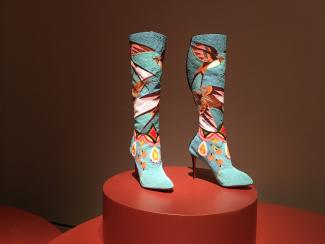 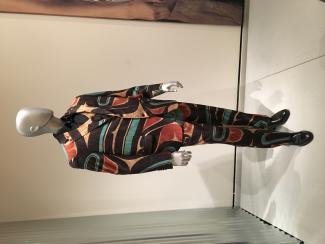 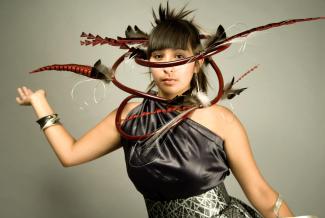 Exhibitions have the power to carry ideas, to challenge stereotypes, and to bring us to a deeper level of understanding about the world and ourselves. “Native Fashion Now,” currently on display at Salem’s Peabody Essex Museum, is no exception. The exhibition features almost 100 works by Native fashion designers and artists created over the last 50 years. Native American Art and Culture Curator Karen Kramer assembled the collection. “I noticed more and more this creative prolific expression as seen through the lens of Native fashion,” Kramer says of her inspiration for the show. “I wanted to show this great energetic movement in terms of contemporary Native fashion—to celebrate that creative expression and look at personal and cultural identity through that lens.” Broken into four unique thematic rooms—Pathbreakers, Revisitors, Activators, and Provocateurs—the exhibition guides participants through a fully immersive sensory experience that plays with light, space, sound, and touch. “The Pathbreakers are groundbreaking designers that changed the landscape of Native design in big ways,” Kramer explains. “The Revisitors work with traditional art that had been updated. They highlight the power of cultural exchange and the pulse of interaction and continuum. The Activators create streetwear, and the Provocateurs are experimental and conceptual; haute couture and one of a kind.”

As participants weave their way from Pathbreakers to Provocateurs, each turn delights and surprises, shattering common notions of what Native fashion can be. Kramer notes, “I think that the general public expects a certain aesthetic when it comes to Native design, and getting people to let go of that is a challenge. Native fashion may occasionally have buckskins, beads, and feathers, but it goes way beyond that. Lighting, color, and space play keys roles in how the experience plays out.”

The introductory room, featuring a Patricia Michaels cityscape dress and 30 or so handmade parasols sets the tone for the entire exhibit, pulsing with energy and whimsy. Michaels is a Taos Pueblo designer from New Mexico who has been working in the fashion industry for over 22 years. She quickly rose to prominence as a finalist on Season 11 of Project Runway. Though she didn’t win, she finished strong as the runner up, and was the first Native American contestant in the show’s history. Kramer connected with Michaels as soon as she received confirmation that Native Fashion Now was moving forward: “I introduced myself to her . . . she has been such a groundbreaking figure in the field of Native American fashion that I knew that we needed her involvement in the exhibition.”

Michaels credits her family as primary among her many sources of inspiration. “My mother would make sure we went into areas of Southern Pueblos to see all the different ceremonies and dances,” she recalls. “Then my brother started a Pueblo Opera Program for youth, which paid for eight pueblo children to go see the opera on dress rehearsal night. Seeing the beauty and diversity of the opera since I was five, that gave me another level of exploration of garments and other cultures.

And since my mother was a single parent, we’d have to do dances or performances at different political events or social gatherings. I would be back stage watching these other cultures sitting on the different layers of beautiful hand-embroidered flowers, or hand-painted silks from Asia. I always felt like my life was constantly being stimulated and full of visuals. So I don’t really think that I chose fashion. I think it chose me.”

Recognizing early on how important Taos culture was to her, Michaels chose to live with her grandparents during high school to absorb as much as she could. “The preservation of my culture became really important to me. I could see the pride and the beauty of who I was, even if I wasn’t necessarily appreciated in grade school because I was the only Native American. When I was a kid, I always had to fight for my place in existence. But I kept thinking, ‘Eventually I’ll be able to prove how beautiful my people are when everyone backs off.’ And sure enough, little by little, I did.”

Michaels’ designs, both on and off the runway, are characterized by a sense of wonder and playfulness. She works with hand-dyed and hand-painted materials, and colors them with earth-friendly algae pigments and natural production methods. Her works often emulate or celebrate nature, pulling the viewers into a broader conversation; challenging how they can remain connected to their own stories as they grow. Michaels explains, “As I recognized that those were my values, I decided to create garments that had meaning behind them just like in our ceremonies. Garments meaning strength and inner self worth, and reminding us that those things aren’t always just made at one time—they’re acquired over time. So the things that I make will have that special sense of initiation into another part of your journey in life. As my grandmother said, remember that you not only represent yourself, you represent this family, this household, the pueblo you come from, the state you come from, the United States, and the human race. Everyone is equally as important, and you never know when we’re going to need one another. So walk gracefully and lightly.”

Alongside Michaels’ stunning and evocative works, “Native Fashion Now” also features numerous pieces that challenge viewers to confront the concepts of cultural appropriation and cultural borrowing. One such piece, created by designer Isaac Mizrahi and originally worn by Naomi Campbell, takes inspiration from the formline designs of Northwest Coast tribes. The dress does not emulate traditional color schemes or patterns, but its inclusion in the show invites viewers to question its place within the broader narrative. When asked about the role cultural appropriation plays in contemporary Native fashion design, particularly when used by designers like Mizrahi and Ralph Lauren, Kramer said she placed more value on the dialogue itself: “Cultural appropriation has always been important for us to talk about, and we appreciate creativity and the fact that creativity comes from many sources. Over the course of doing research for this exhibition, it became increasingly clear that there were so many different ways to approach this topic. For [the Museum], we wanted to open this conversation.”

Michaels had a similar response. “That same old conversation bores me, because it is up to the artist and the designer and the company to have the integrity to doing something inspired, to be a real designer, rather than just doing something that is a blatant copy. When I was in 8th grade and I saw Naomi Campbell wear that Mizrahi dress, I thought I died and went to heaven because finally I saw something that was done in a beautiful way—it made me feel that the world was ready to accept Native Americans in a glamorous way.”

As for the opportunities available to aspiring contemporary Native designers, Michaels is optimistic. “Nowadays, we have every capability of moving forward in the industry as Native Americans. The diversity of a design—not just one person can do it, and more than one person should want to do it. If you’re going to honor something that’s beautiful and classic, then do it appropriately. Take the time. And if you don’t have the time, well, then, save it for a time when you do. Don’t be lazy, that’s all. Explore it. That’s what makes it fun. If you really want to enjoy what fashion’s about, then explore it.”