My Journey of Magic Realism 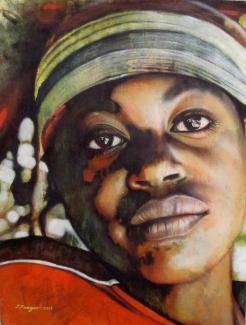 I like to say I “came out” of this world on June 13, 1983. I was born in a small rural town called Kerema, near my mother’s village Tapala, in the Gulf Province of Papua New Guinea. My father is from Nieder Sachsen, Germany and grew up in Australia from an early age. He arrived in Malalua Station (PNG) in the mid-1970s, where he and my mother married. The first 10 years of my childhood were spent in East New Britain Province. I remember my father, a science teacher at Kokopo High School, bringing home piles of scrap paper from work so I could draw. This early experimentation nurtured a keen interest in art. In high school, however, I found my true calling and could envision the possibility of a successful career as an artist.

I studied Visual Art at the University of Papua New Guinea in 2002, leaving after the first year as I felt dissatisfied. I made a living teaching part-time classes on the technical aspect of drawing and by selling my paintings. I discovered that any person with a passion, through incessant curiosity, gains knowledge. Many hours were spent searching for art books at secondhand markets, reading and squeezing every bit of information I could from them. In later years as the Internet became more readily available to me, I learned more. I continue to grow in this way.

Magic Realism
In 2005 I moved to Bougainville, the home of my partner, where we remained for three years. We lost our firstborn son soon after his birth and I learnt quickly of the genuine hardships of living in remote Papua New Guinea. I recall carrying his body home, laying him down and drawing a portrait of him. The whole occurrence left a profound mark on my life and forged an indelible connection to my art.  Often at the busy Buka Market, I would get the chance to sketch people from all over Bougainville. Stories spread of my sketching ability. Soon I was being described as a “magic man.” It was amusing for me at first, but I let it become part of me. I was creating a face out of nothing, and from this perspective I saw and discovered a more spiritual side to my work. That’s when I first began describing what I was doing as Magic Realism. In a sense my sketches could be categorized as realism, but in the world where this realism was created, it was seen as magical. The term “magic realism” in literature does not include overtly fantastic or magical content, but rather looks at the mundane, the everyday, through a mysterious lens. Using this view of magic realism, I could easily relate it to the realm in which my work seemed to suspend.

Pivotal Moment in Career
It was 2008 when I returned to Port Moresby to re-establish my art career. That year I spent most of my time in my studio reading, learning, creating ideas, and painting. My family went from a very communal lifestyle to one of greater solitude and individualism. I thought this was perfect for me as an artist. However, I slipped into a depression. In March 2009, a sense of salvation came in the form of the Tautai Artist Residency which I was awarded. I travelled to Auckland, New Zealand; this was the first international recognition of my work. I painted Bougainville images, the “Buka Market” Series of Portraits. This solo exhibition was highly commended and a sellout show. I knew then that through my art, I could walk and talk in two different worlds.

The 2013 New York Musical Theatre Festival
After initial international exposure in New Zealand, I was offered many opportunities to travel and exhibit. I worked as lead curator for Papua New Guinea’s showcase at the 2010 World Exposition in Shanghai. It was there that I discovered a new way of expressing and sharing my art, including painting live in collaboration with music or musical performers. I found an art form that fulfilled my need to paint, yet retained the communal feeling I had become accustomed to in Bougainville. Returning to PNG, I began filming my painting process and sharing it online. A year later my manager sent one of my movies to a friend, Jeremy Culver, a producer/writer based in the USA. We traveled to Los Angeles and workshopped ideas for a possible musical theatre production  featuring my live performance art. The show, now titled “Feather,” debuted in the 2013 New York Musical Theatre festival. Performing in such a professional production has been
a valuable experience. The “magic realism” was able to transcend the Pacific Island of Buka to the bright city lights of New York, and still evoke the same sense of astonishment.

Social Advocacy and Philanthropy
In Port Moresby my work notably directed towards social awareness. Most days I was confronted with the suffering of an ever-increasing list of the marginalized people in PNG. Through the inadequacy of education, people are being ostracized and left without a voice. This issue has become accelerated with the onset of a somewhat-frightening natural resource boom; illiterate landowners are at risk of being taken advantage of by their own government and multinational corporations. In August 2011, the exhibition Aroaro—A story of a people, opened at Art Street Gallery in Port Moresby, featuring the work of Ratoos Hoaopa Gary and myself. I painted portraits of the Aroaro people, long ignored and marginalized through lack of basic services and education. This group is but one of the silent witnesses to the effects of environmental degradation from the rampant logging in the area. My close involvement with the subjects of my portraits led me into social advocacy and philanthropic work. Now I give a percentage from the sale of a painting to the subject, as opposed to simply paying a model fee. When possible, this is done
while hosting a little ceremony, what we call a Kaikai, or feast.

The PHAR Project
The PHAR (Paga Hill Art Resistance) Project was inspired by the brutal forced eviction and demolition of homes of the Paga Hill Community in Port Moresby that occurred on May 12, 2012, to make way for a contentious commercial development. It began with colleague Ratoos Haoapa Gary, a Paga Hill resident, and myself. As prominent contemporary artists we wanted to raise awareness through the use of art to highlight the human rights tragedies. Photographer Philippe Schneider joined us, followed by many talented, creative people both locally and internationally.

After several months of working with the Paga Hill community, we staged an art exhibition and theatre performance. The theatre performance was a highlight. It embodied and retold the stories of the actors themselves, whom all had been afflicted by the demolition. It was a unique validation for the abuse and losses they experienced. Through the actors’ newfound expression in art, they could find a voice to protest and resist. One viewer described the performance as a “living, breathing documentary.” With very real and pressing issues playing out in the courts and the media, between the developers and the residents of Paga Hill, it was a great artistic challenge. Our message of resistance was unsullied by the compromises required of corporate or political support. We maintained an independent voice full of artistic passion and integrity.