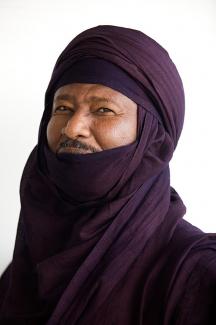 From the young age of 10, Moussa Albaka was taught the art of Tuareg silversmithing and jewelry making from his father and grandfather. His family has been involved in silversmithing for many generations, as well as camel caravan trading throughout the Sahara Desert. Their jewelry is 95 percent silver and is made by a wax process that takes hundreds of hours to complete. The men engrave intricate geometric designs in the repoussé style, hammering out shapes from the reverse side of the piece and inlaying semi-precious stones, metals, and ebony. Such techniques take a great deal of time, but they maximize the feel and beauty of each piece. Now Albaka is sharing his craft with the next generation of his family. “I teach my brother, my nephews, and my son. It is about keeping tradition alive,” he says.

Albaka is Inadan, an artisan tribe of the Tuareg in Niger, West Africa. The Tuareg are also known as the “blue men of the Sahara” because their traditional robes and turbans contain a deep indigon dye that rubs off on the skin. They live as nomads, herders, farmers,and city dwellers, mainly in Niger, Mali, Libya, and Burkina Faso, with Agadez, Niger as the tribal center.

Prior to 1992, Albaka traded in Europe and Africa. His business expanded to America when he met the US Ambassador in Niger who encouraged him to travel abroad. When he first came to the United States he toured several cities, selling his jewelry at art fairs. He started working with other artists to get inspiration and see how they made their jewelry. In 2001 Albaka moved permanently from Niger to the United States, living in San Francisco and New Mexico before finally settling down in Arizona. Many of his designs are traditional, but he has been creating modern pieces in his own unique style for many years. He has collaborated with several well-known designers, exhibited his artwork in the Smithsonian Museum, and won the UNESCO award for artistic excellence.

Albaka settled in Arizona because its desert climate is similar to Niger. The desert is where he grew up, learned the trade, and has continued to teach his children and others. In the Sahara, people who live there have nothing but their skills. This is the way that the Tuareg live; they travel to other communities and sell their jewelry where they can. Traditionally the pieces are much larger, however, Albaka wanted to make his smaller to be more wearable. He creates necklaces, earrings, buckles, and amulets. “When I create my own jewelry, I create art,” he says. Creating art is not just for the men, however. Albaka’s sister makes belts, boxes, pillow covers, and leather camel bags. These are decorated with bright colored leathers using techniques of embroidery, etchings, fringing, and weaving.

The money Albaka earns by selling jewelry helps him provide for his children and nephews who live in Niger. When he is not at art fairs or working on his latest piece, he returns to Niger to teach the art of Tuareg jewelry: “When I am back in Niger, I travel to schools, to teach children, to educate them in arts.” For Albaka, jewelry making and teaching are not just ways to make money. They are ways to connect with the generations before him, the desert, and his identity.