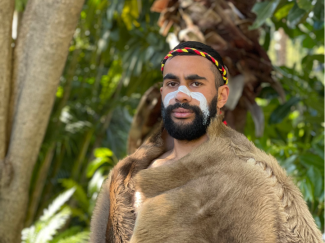 I have ancestral and cultural ties that span from the sandy wetlands of Whadjuk country to the granite outcrops that are home to the Mungart trees of Ballardong country in Australia. My borrunga (totem) is the Googoomat (Boobook Owl). That means I must know him better than anyone else to ensure he has what he needs to survive; I protect him as he protects me. Reciprocity is at the core of all Indigenous worldviews. We have profound and intimate relationships cultivated by embodying values of patience and respect. We embolden these values in every song, dance, story, and step. These connections inform the lens through which we look at the world around us and to which we are obligated to look after as the Moondang-ak Kaaradjiny. The interconnectedness between Boodjar (country), moort (family) and kaatidjen (culture) implies our interdependency. Without Boodjar, no moort; without moort, no kaatidjen.

Boodjar means country, everything that makes up the world around us. It is a word that encompasses every grain of sand to every energy conjured from our Mother Earth. Moort relates to our relations, to everyone around us— people, animals, trees, water, stars. Kaatidjen translates to knowledge. Every bit of information that is absorbed into our kaat (head) informs every step our djen (feet) take. We speak only when necessary, because this transfer is sacred and integral to ensuring that our moort are able to be the custodians needed. When the Nyittiyang (colonizers) first arrived, the leader of the Mooro clan, Dembart Yellagonga, showed compassion and was levelheaded with his diplomatic engagement with the white-skinned people from the sea. Quickly these relations turned sour, and overnight, Galup, the place of fire (now known as Lake Monger), became a place of sorrow for Dembart’s moort. John Forrest and his redcoats rode in on horseback killing every man, woman, and child they could, clearing the land of its custodians. Enough survived to tell the tale, though not enough survived to fulfill their ancient oath to Boodjar. Two hundred years later, Boodjar tells the tale of this change of stewardship: the most sacred of sites intentionally desecrated, the richest of ecosystems destroyed, and the freshest of water poisoned.

For two centuries, the Nyittiyang have demonized our culture and made it illegal to practice, unless you wanted your children stolen. They fenced off our ancient paths, criminalized our fire stick farming practices, and rounded up our leaders and left them to rot on our sacred island turned prison, Wadjemup. But, the Nyoongar path has been walked so long nothing could destroy it. We stand here fearlessly walking it as the last few generations of Nyoongar could only dream of, our kaatidjen as our map, guiding us to fulfilling that oath to Boodjar yet again as only we can. The universality of the totemic system across the globe speaks to its effectiveness as a mechanism to ensure balance is maintained within this web of life. As we come to know these animals, trees, plants, and elements as our brothers and sisters, we treat them as such. This intimate and profound connection is the vested interest we have in ensuring they are cared for and protected. This is why we are the answer to this climate crisis. It is only us, the carers of everything, who can bring about the healing of over 200 years of abuse. 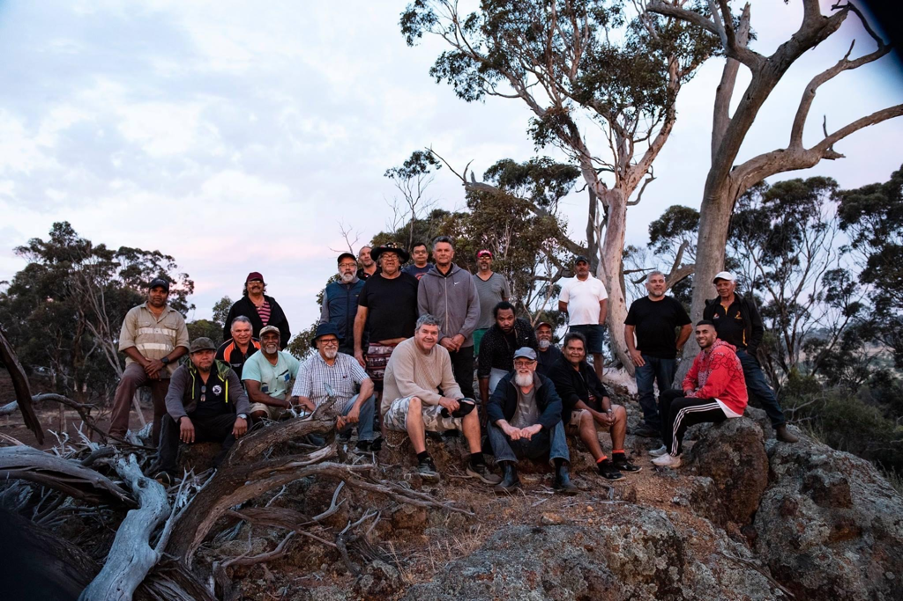 As the Whadjuk people of Boorloo (Perth) were chased over the hills onto Ballardong boodjar, greedy Nyittiyang who hoped to profit from the fertile area now known as the Wheatbelt quickly followed. They needed Nyoongar assistance, which was initially met with resistance and acts of aggression. The Nyittiyang began to disrupt Nyoongar food systems, burning medicine trees such as the Balga, poisoning water holes, and fencing off ancient pathways. This catalyzed a devastating co-dependency between the two. Our lore tells us we must never kill a tree and to only take what we need, but for the next century, Nyoongar people in the area were forced to clear every tree from its roots and every rock from its place to make way for the introduced farming techniques brought over from England. Ballardong Nyoongar boodjar, an area the size of Britain, was stripped of 93 percent of its native vegetation for the sake of farming in the colony.

The effects are now undeniable in the devastating dryland salinity, which causes poor water quality, damage to infrastructure, and reduction in plant growth. Excessive land clearing has exacerbated the rise of salinity as introduced non-native shallow-rooted annual crops and pastures have replaced the deep-rooted, perennial native vegetation. As the trees were removed, topsoil eroded, salinity rose, chemicals from fertilizers polluted our beeliar (our umbilical cord/waterways), and our Mother got very sick.

Every day, we Nyoongars are revitalizing our culture and building up our capacity to again assume our roles as the carers we are obligated to be. One example is the Yarraguia family farm at Mungardup in the Wheatbelt, where Dembart Oral McGuire initiated the Marlak Niran Project. The Project is returning country to bushland, planting trees to the devastatingly cleared land in the area, removing non-native animals such as sheep, and bringing back karla ngara, the ancient practice of firestick farming, also known as cool or cultural burning. The results speak for themselves, as native plants and animals long lost from that area have returned in abundance. 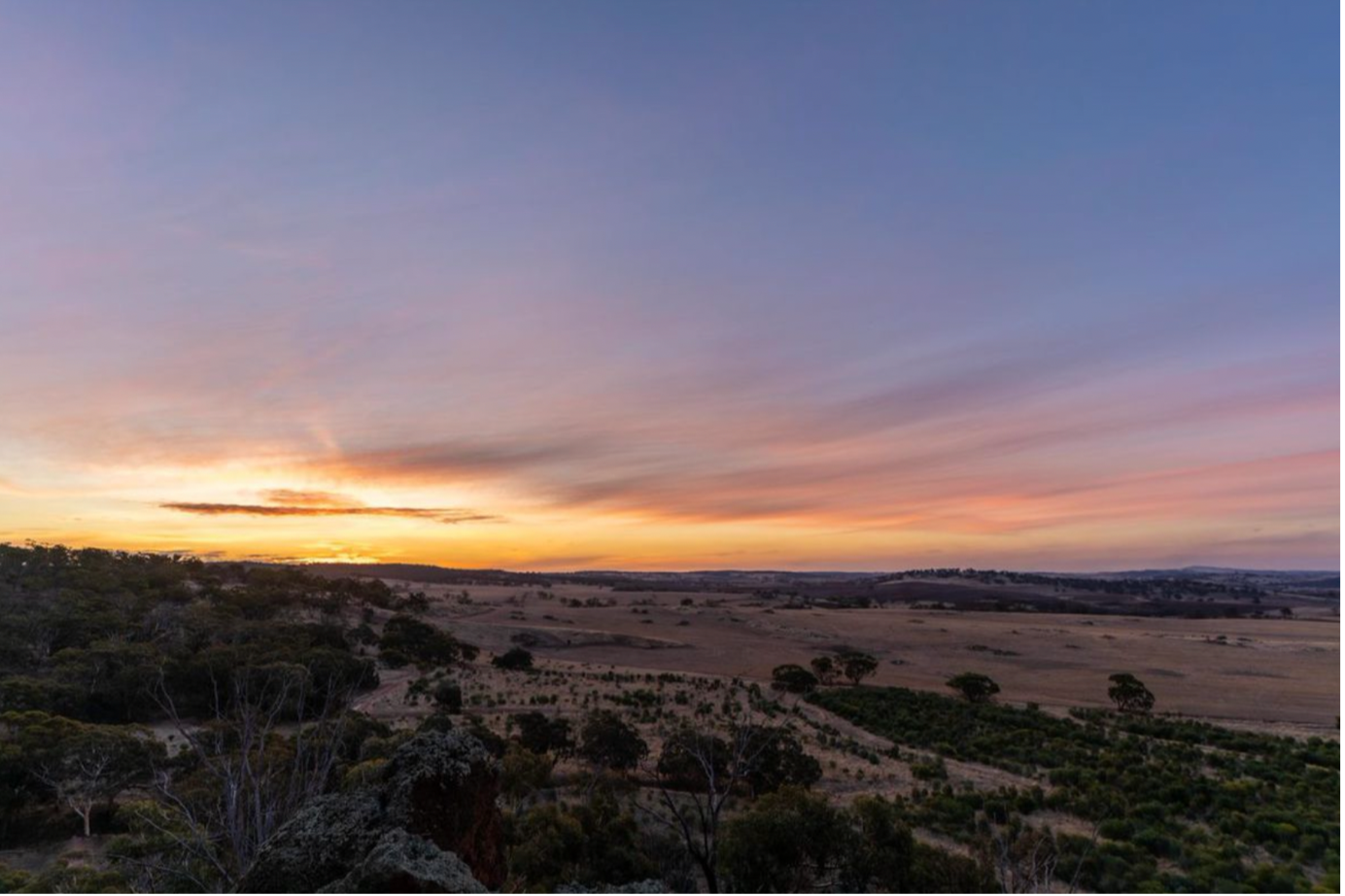 The dissonance between value systems is especially evident in fire management. Traditional Nyoongar fire management is predicated on the intimate connection that we have with the land and our ability to read wind conditions, soil types, and trees, and to draw upon thousands of generations of experiential knowledge of when and where is the best time to burn. The use of small cool burns at the driest times of the year only burn the grasses and create a white smoke that causes trees to flower and seeds to germinate, whereas the hot fires from contemporary prescribed controlled burn approaches burn canopies, creating a toxic black smoke that damages the ozone layer and leads to the soil heating up so much so that regrowth of vegetation is stunted.

The hot fires that are inherent to current approaches led by the Department of Fire and Emergency Services on Nyoongar boodjar employ aircrafts to drop incendiaries over targeted areas to attempt to reduce fuel loads. This approach is quicker, cheaper, and requires no involvement of Nyoongar people. However, it fails to prevent or slow bushfires and has devastating effects to the ecosystem.

The prescribed so-called controlled burns are hardly controlled; the hot burns move so quickly that small animals such as frogs have no chance to move out of the way of the fire, thus becoming a major contributing factor to biodiversity loss. One key rule in Nyoongar Lore is that the burning of canopies is forbidden. One can clearly see how this helped maintain balance for thousands of years, and it highlights the advantages that Nyoongar Peoples have over non-Indigenous Peoples in the space of fire management. The world is on the brink of no return, and the only people who can be trusted to steer us back on course are those with the greatest vested interest in seeing the radical changes needed realized. For too long our value systems have threatened Western aspirations, and now our paths are inextricably linked for survival. Climate action means divesting power and redistributing wealth to Indigenous

Peoples across the globe. Symbolic gestures toward reconciliation mean nothing to the Mother who has been abused for all these generations. We must take stock of what’s been stolen, tangibly and intangibly, and figure out how to restore balance to Boodjar, moort, and kaatidjen once again.

—Jack Collard (Nyoongar) works with the Aboriginal and Torres Strait Islander International Engagement Organisation, which aims to nurture relationships outside of the colony in hopes to later leverage opportunities to contribute to the realization of pursuits for self-determination in Australia.