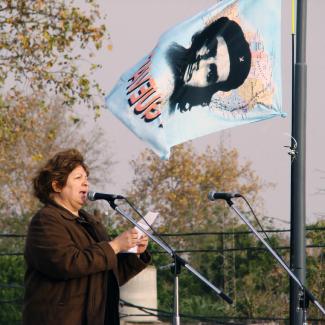 Aleida Guevara March isn’t content to rest on the laurels of her iconic father. Guided by the Hippocratic Oath as much, if not more, than any political manifesto, her fervor to heal the sick —especially children—is unabashedly tempered by experience working among Indigenous Peoples throughout the world.

Revolutionaries don’t typically cultivate humility among their attributes to further their causa, and Che Guevara —an Argentine medical doctor who became a central figure to the Cuban Revolution—was hardly an exception. A hero in the hearts of many Indigenous people throughout Latin America and Africa especially, his internationalist interventions have not escaped criticism for what some view as a paternalistic attitude toward Indigenous Peoples.

Aleida Guevara March (Guevera’s daughter, born to his second wife, Aleida March), while hardly less international A Modest Revolutionary in focus, has forged a more measured, self-reflective path— one that inspires of its own accord. She was raised to live a life filled with and guided by purpose, and she found hers in the same medical calling her father once did. For her, however, the practice of medicine was not a stepping stone to fomenting a political revolution. For her, health care is the revolution.

Cristina Verán: Describe for us what your work entails as a medical doctor, internationalist, and representative of Cuba to the world.

Aleida Guevara March: I’m an allergist and pediatrician, that’s my real job. But I also engage in solidarity work with peoples throughout the world. Wherever I travel, I bring with me the message of respect for all human beings; above all, Indigenous Peoples. For far too long, they’ve been left behind or forgotten on the road to so-called progress, yet it is precisely they who can teach the rest of us how to live our lives with greater dignity.

CV: You’ve spent a major portion of your professional life working in Africa and South America. Please share some experiences which have been most eye-opening or otherwise significant.

AGM: For one, I spent some time in Ecuador and became very interested in the culture of its Quichua people. I met with a group of Quichua midwives, which was very enlightening. They recognize, for example, that women should give birth in a place that is cozy and warm, comforted by loved ones— not isolated in some sterile room. If I’d had the privilege of speaking with such knowledgeable women back when I was studying medicine, perhaps the births of a hundred babies or more would have gone much better!

CV: How would you describe the distinctions between theirs and your own Cuban, or Western, ideas about childbirth and maternal care overall?

AGM: Let’s look at history. The Spaniards brought their own cultural and religious ideas with them to the Americas. Back in the 11th century, the Catholic church had declared that for any woman to give birth without experiencing pain would prove she was in league with the Devil; that women should suffer in childbirth. Can you imagine? Western doctors obsess over things—even to the extent that this may cause agony or harm to their patients. That’s crazy! The Indigenous healers that I worked among, however, take physiological things so calmly, so self-assuredly, and their patients benefit greatly from this.

CV: You worked for quite some time in Bolivia, where your own father was killed. How did you find people’s receptivity to Cuban medical intervention in their lives?

AGM: We Cuban doctors—more than 1,000 of us there at the time—had been taught to demonstrate the utmost respect for all our patients. The Indigenous communities felt this, and so they trusted us. We actually found ourselves at the center of conflict, wherein they were refusing to be seen by Bolivian doctors; only Cuban ones. I had not imagined anti-Indian racism would be so widespread in a country that is itself so fundamentally Indian. For so long, Indigenous Bolivians have been treated as inferior beings by their own countrymen.

CV: The Indian population of Cuba is nebulous; meanwhile, those who are of Spanish and/or African descent prevail in number. Is anything in that Bolivian experience relatable to some context in Cuba?

AGM: Just as Bolivia is an Indian nation, we are now an Afro-Latino one. Unquestionably, Cuba’s Afro-descendents have suffered racism comparable to that experienced by Indigenous Bolivians—especially before the revolution. Today, to speak of Cuba and Cuban identity, we refer to the three main tribal groups from Africa brought to our island, and say, “Él que no tiene de Mandinga tiene del Congo o Carabalí” (He who lacks the blood of the Mandinga people surely has that of the Congo or Carabalí).

CV: You’ve spent a great deal of time in West Africa. How did you and your Cuban comrades, especially those of African descent, engage with and relate to the Indigenous Peoples there?

AGM: When I was in Angola during the war, a brigade of Cuban folkloristas visited us and went around performing in many Native villages there. Each time they’d play the drums, the Angolans expressed amazement, saying, “It can’t be possible! You Cubans maintain our native customs even better than we do!”

CV: Cubans—hundreds of years removed from Africa— are representing some Indigenous cultural practices more fully than the Native Angolans themselves?

AGM: Well yes, that’s what they told us. As I understand it, in trying to maintain their identity and hold onto their culture during the era of slavery, all the traditional knowledge that the Africans had brought with them to Cuba from that time was frozen thereafter in their collective memory. To change or add even a word to their their songs, their prayers . . . that would have altered their connection to the ancestors. And so what has been preserved in Cuba is akin to what was practiced in Angola and elsewhere in West Africa hundreds of years ago.

CV: And for you? What connection, if any, did you feel there?

AGM: As I watched the performances, hearing the drums, with my Cuban people singing and dancing in that context, I began to feel as though I was also part of that village, part of Angola. Living there changed my outlook on life completely. CV: Have you had the opportunity to connect with Native communities in North America during your travels? AGM: I grew up seeing the old movies filled with cowboys, presenting only a fictional, Hollywood image of Indians. When I went to Canada for the first time, to Winnipeg, I asked to be taken to First Nations communities there to get a better understanding of their reality today. What a shock it was to discover so many living on what looked to be the poorest lands in the country. Drugs, violence, and alcoholism were rampant—yet Canada talks about “human rights.” Any nation that dares to open its mouth to talk about human rights anywhere else, when it forces its own Indigenous people to live in that way... it’s shameful.

CV: Your father began as a doctor, but his calling to change the world ultimately manifested through asserting political ideology through armed struggle. Your own path, revolutionary in a different sense, is firmly situated in the practice of medicine. Is there a connection?
AGM: How can we, as doctors, relieve the sickness of human beings if they have nothing to eat? How can we improve the overall health of people if they don’t have their own lands on which to grow food and cannot feed their children? My father asserted that you cannot talk of peace while there are children dying in need. Indeed, we cannot simply talk; we must act. And so I do.

—Cristina Verán is an international Indigenous Peoples’ issues specialist, research consultant, communications strategist, and multimedia producer. Her work focuses at the intersections of human rights, political engagement, the arts, and community development. She is a longtime United Nations correspondent and was a founding member of the UN Indigenous Media Network.