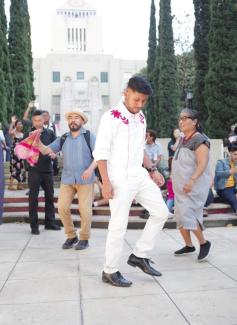 I am a Na Ñuu Savi (Person of the Place of Rain, Mixtec) born in Santa Maria, California, United States, to Nivi Ñuu Savi (People of the Place of  Rain) who migrated there to work as farmers in the California agricultural economy. Ñuu Savi (the Place of Rain) is in Oaxaca, Puebla, and Guerrero, Mexico, where many pueblos are known by names that describe our history. In the Mixtepec variant of Tu’un Savi (Language of the Rain), San Juan Mixtepec is named Ñuu Xnuviko (the Place Where the Clouds Descend) in reference to a story about a tall Tuyuku (Montezuma Cypress tree) that stood in the main pueblo and over which many clouds would gather.

Mixtepec and Mixtec (the Place of Clouds and Cloud People) are Aztec names imposed when they conquered Ñuu Savi. The Spanish Catholics would later impose their language and religion on Na Ñuu Savi and Aztec place names; thus, San Juan Mixtepec became another name. The people of Ñuu Xnuviko who know each other as Na Ñoó (People of Our Pueblo) came to accept San Juan Bautista as their patron saint who protects us and ensures us rain. While Catholicism is a vehicle for rituals through which we practice reverence for nature, it is also a vehicle for our patriarchal tendencies. Our Indigenous present is full of synchronicities. It is with practices and histories coming together and pulling apart that I write about what it is to be Queer and Indigenous.

I can rarely cross the street in Santa Maria without seeing a family member, Na Ñoó, or Na Ñuu Savi from a different pueblo. I grew up in a male dominated community where women crack through the barriers of male violence to push forward their freedom to ko va’a (live well). In Mixtec communities, the goal to live well is surrounded by ideas of economic survivability, emotional well being, and physical health. To grow up in a low-income family of farmworkers is full of struggles. On days in which Mom would count money she and Dad collected for rent and bills, Mom would say, “Na ko va’ako, ñaka ni vi” (Let us live well, that is all) to communicate that our financial struggles were not as important as our emotional and physical health. The added struggle of breaking through barriers like male violence, drug abuse, and illness made surviving harder for all of us. An added struggle I had to contend with in silence is homophobia.

As a boy, I learned that who I was, a boy attracted to other boys, was wrong. I kept this attraction a secret. I would watch gay storylines from TV shows and coming out stories on YouTube where couples and youth were met with physical harm, death threats, and parents who would abandon their children or abuse them for being Queer. As boys we are taught to think that men are defined by aggression and soft features are feminine, so I learned that being both gay and feminine is worse. I struggled with this deeply as a boy, and I refused to voice this part of myself for fear of abandonment and physical violence.

The first public 2SLGBTQ+ event I went to was not on purpose. 2SLGBTQ+ activists took over an intersection in Santa Maria in 2008, marching with signs opposing the State ballot initiative Proposition 8, which, if approved would eliminate the right for same sex couples to marry. I was walking home alone when I heard a crowd chanting “No on 8!” They moved in a square with signs raised as the traffic lights turned green, stopping to welcome or argue with people on the street corners as the lights turned red. I didn’t interact with anyone, crossing the street in silence as the crowd chanted around me. Deep inside I wished I could have marched openly with this group. Eventually, I joined my high school’s Gay-Straight Alliance. Proposition 8 passed. I learned to be Queer in different versions of private and public, caring and not caring what people might think. The second public 2SGLGBT+ event I attended was a vigil held to acknowledge a rise in 2SLGBTQ+ youth suicides in 2010, the same year Prop 8 was ruled unconstitutional. The third was Santa Barbara Pride in 2011. That same year I was part of a weeklong program, the Community Leadership Institute, made possible by Just Communities in Santa Barbara. Through this program, I learned to articulate and empower myself as an Indigenous, low-income, Queer person through collective organizing to fight back against stereotypes and policies meant to disempower us. In 2012, I participated in 2SLGBTQ+ history workshops through the Pacific Pride Foundation in Santa Maria. It was an initiative created by Thedy Barahona after the passing of California’s FAIR Education Act, which mandated California schools teach LGBTQ history. We discussed Queer sexual and gender identities, the histories of abuse towards the community, and the histories of resistance. The workshops were well received, sometimes with the impact of students coming out to us or changing their minds about 2SLGBTQ+ stereotypes we discussed in class.

I am a 28-year-old man who hasn’t been out to my parents. If they come to know of my sexuality, my message to them is that I am living well despite my struggles. I visit home, although one of my motives for moving to Los Angeles from Santa Maria in 2014 was to practice my own version of ko va’a away from any perceived rejection from them or the community. I celebrated being Queer and being Indigenous apart. This distance helped me come out to my brothers, whose acceptance grew as I grew and celebrated Queerness apart from the Indigenous community that had raised me. In Los Angeles, I built another home I hope to welcome my parents in. I do not feel safe to do so yet. I don’t blame them for this feeling; I blame homophobia and colonialism, how both collude to build the present we are in.

I never put together who I am as an Indigenous Queer person until 2019 after volunteering at events organized by the then-leaders for the Frente Indigena de Organizaciones Binacionales and founding members of Comunidades Indigenas en Liderazgo, Odilia Romero, Janet Martinez, and Luis Lopez Resendiz. The night after Weaving Words and Rhymes, a rap concert that unites Indigenous rappers from the United States and Mexico, I had the opportunity to speak to two men who rap in Tu’un Savi. Both had migrated to California from San Martin Peras, another Oaxacan pueblo in Ñuu Savi. Janet motivated me to ask about gay people in their town. One of them recalled an Elder calling an effeminate man Na Ivi (Two Person), whom he was advised not to look at directly because of their ability to use magic against people. This reminded me of what I had read regarding the spiritual affinity of Two-Spirit people, mostly known to describe Indigenous people outside of the normalized gender binary in parts of North America. I later learned that in Ñuu Xnuviko we are called Na Uvi Nuu, People of Two Appearances or Forces.

Although I have tried to research more on the history of sexual and gender diversity in Indigenous Mexico, this part of our history has been twisted in literature, oral history, and practice by people from outside. I will have to ask community members directly. In the hopes of illuminating who we are, I would like to ask the following to others like myself who I want to learn from: How do we rebuild pasts, build presents, and plan futures in which we can live well as people who are Indigenous from “Latin America” and Queer?