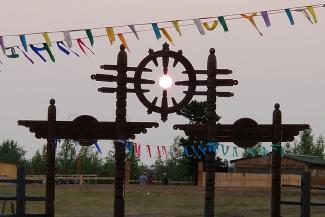 It was indeed the best of times, and it was the worst of times. First, the good news: the pressure under the old Soviet system against local religious practices has been relaxed and the Shamanic celebration of the summer solstice was back in vogue. I felt surprisingly at home in some ways. As a zOyaha Tribal person, we also identify as the People of the Sun. The extravagant celebration of white cranes in their dances reminded me of our own ceremonial songs that originated with the crane. It was awkward because of the massive crowds of tens of thousands of observers and the garish, carnivalesque presentation. However, it was beautiful to hear the chants of Shamanic leaders in their original language over the loudspeakers.

The problem centered around the official conference on Indigenous languages celebrating the UN International Year of Indigenous Languages (IYIL) in Yakutsk, Siberia, Russia, which was formally a success. The meeting was held at a location that was an eight hour plane flight east of Moscow in the northernmost city in Siberia, where all of the buildings are elevated above the ground due to the permafrost conditions in the region. It is a land of Indigenous Peoples and special horses that had been adapted to survive the 60 degrees (Fahrenheit) below zero cold in Yakutia. It is a place where we enjoyed traditional foods with soured horse milk called kumis and horse meat at every meal. We were far enough north that the night sky never fully darkened, and the sun broke the horizon before 3:00 a.m. for the new day. It was a great privilege for me to be there and participate in these proceedings.

The meeting was an international gathering of linguists, anthropologists, philologists, and students of religion and of Indigenous language and culture, including students who were themselves members of Indigenous nations and participants in the academy. This important event in the IYIL was a success by every measure except one: the Indigenous voice was almost entirely absent. That is not to say that non-Indigenous voices have nothing to offer, but to make it clear that the most critical voices, the most important voices, are those of Indigenous community members, informed by their own songs, stories, dances, and prayers. What is most remarkable about this development is that when I had pushed for 16 years to help precipitate the IYIL, the whole point was to provide a focus for Indigenous languages and the Indigenous voice that needed to be heard in order to reclaim our rightful place in international fora.

As the all-day meetings wore on and on, I kept waiting to hear an Indigenous voice in the room, but instead was regaled with the details of place names and the connections of philology across diverse Indigenous communities in a never ending parade of minutia. While these details seemed to represent a deep fascination for the presenters and most of the audience, they struck me as completely beside the point. The point of the IYIL was to elevate the knowledge and awareness of Indigenous languages and perspectives in preserving and keeping those languages alive and vibrant within Indigenous communities in order to ensure their songs, stories, and dances continue to be heard for future generations. Those Indigenous voices were not being heard here at this gathering.

One night in the hotel, I called aside a small huddle of Indigenous and non-Indigenous participants to share my concerns about the lack of Indigenous voice. It was, by my standards, completely appalling that the Indigenous voice was absent from the room, but I was not sure that the non- Indigenous nor even the Indigenous scholars were aware of this absence. Our conversation went round and round about the issue of whether Indigenous community members even wanted to have their voice heard in Siberia, or whether it was the accepted prerogative of the academic community to speak on their behalf. Our debate was intense and yet was engaged in good faith and lasted until the midnight sun had almost set at 1:30 a.m. in this far northern latitude.

The strongest pushback to my point of view came from a brilliant Russian linguist of retirement age who possessed a well-intentioned engagement with Indigenous communities and their languages. She had spent a lifetime documenting Indigenous languages, and what I had to say was clearly upsetting to her. It was not my intention to challenge her individual career, but to call into question the overall system of intellectual colonialism that was crushing Indigenous languages across Siberia and around the world. My push to elevate Indigenous community perspectives was perceived as somehow elitist, that I was only speaking out of my own experience and not respecting the local attitude of Indigenous community members. The linguist insisted that community members wanted to share their knowledge of the language with linguists so it could be written down in books, articles, and dictionaries; only in this way would their knowledge be preserved for future generations. I replied that yes, indeed, this peculiar predicament is the case, but it only manifests because of the extreme colonial conditions that the communities have been subjected to for generations. This outcome is the direct result of the extreme suppression of Indigenous languages and cultures. This strange acquiescence to the intellectual colonial project on the part of Indigenous community members was itself an artifact of that very colonial process. 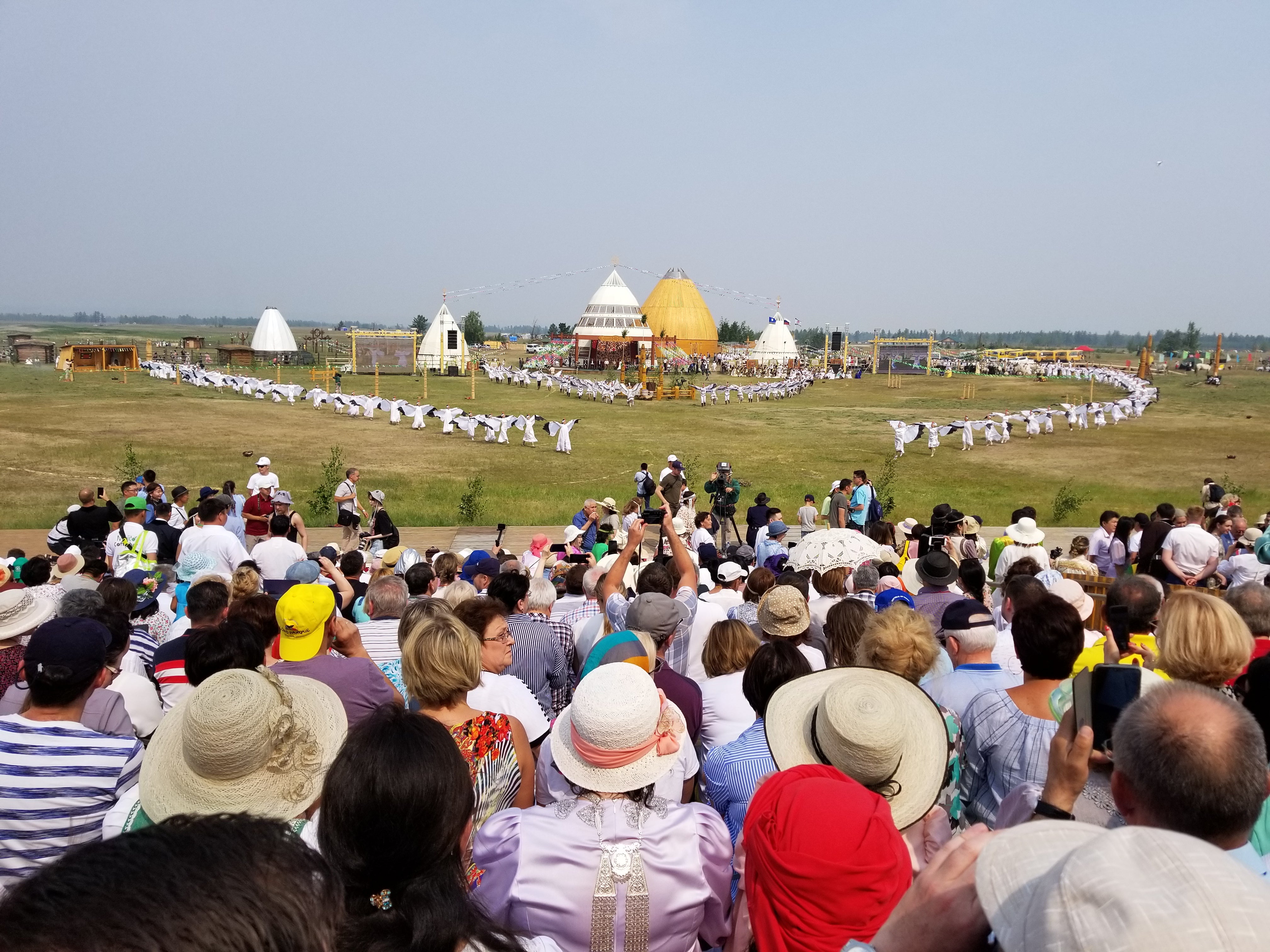 My argument centered around what I have heard from our elders, that our Indigenous languages are gifts from the Creator, that they are special markers of who we are as Indigenous Peoples. The case that I was making is that our Indigenous languages are living and powerful, yet fragile. And since our languages are powerful things—according to traditional understanding—it is better that powerful things should be put away rather than become a plaything for outsiders in the practice of intellectual colonialism, where only academics will have effective access to these Indigenous language materials. In my opinion, this would be the worst possible outcome in the struggle against colonial domination. To end up becoming stuck in the colonial trap of the academy, rather than living on in our Indigenous communities, would be the most tragic colonial outcome. That is precisely the end product of the colonial project.

While I respected this senior scholar’s perspective and well-intentioned attitude toward Indigenous communities, I was most disturbed by the young Indigenous scholar who was part of this intense discussion. She was a young mother who was a native speaker of her language. Yet in some misguided colonial mission, she was dedicating her academic career to producing a dictionary of her language. While producing this dictionary, she was, at the same time, failing simply to speak her mother tongue to her own children in her own home. The scandalous nature of the seemingly benign academic process could only be clarified by the presumption of academics speaking in the voice of Indigenous Peoples. This is indeed incredulous now in this year of 2019, the UN International Year of Indigenous Languages.

My observations in the Siberian context are not given here as a unique case, for they are representative of the broader global Indigenous challenges as we work to keep alive our original languages in the context of nation states that have operated out of a colonial paradigm for centuries. As Miryam Yataco, language activist from Lima, Peru, who spoke at the recent IYIL Conference at Purdue University, has insisted, “The protection and revitalization of Indigenous languages of the world and of Indigenous Latin America has to be in the hands of Indigenous communities. States have to take steps in the immediate creation of consulting groups tied to the speakers’ communities, who will take over the future of our languages—so that the creation and interpretation of language rights policies would be assessed and recommended for implementation, especially with the voice of the traditional elders’ councils in the communities.”

All photos by Richard A. Grounds.