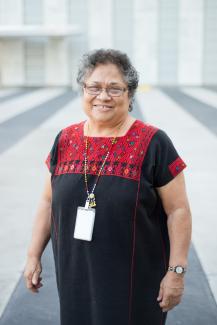 "Today we have come to the culmination of a very complex process. Over the last four years, we Indigenous Peoples have said that we would not permit the UN to hold a World Conderence on Indigenous Peoples that excluded our participation. We have tried to make sure that every decision about the conference was made jointly by member states and Indigenous Peoples. We succeeded by having the president of the General Assembly name two Indigenous advisors and two government advisors. We are the ones who have cofacilitated the drafting of the conference outcome document that was adopted this morning. Since the beginning, it was said that the outcome document would be action-oriented. It’s not a document that creates new rights, but rather tells States and the UN how to comply with existing rights established in the UN Declaration on the Rights of Indigenous Peoples. This was a major challenge because it forces one to say, “I am committed. What am I committing to?” States always find a formula so as not to comply with what they’ve said. So that was a challenge, getting them to accept using a language of commitment. We succeeded in many paragraphs; in others, we ended up using softer language.

What is most emphasized in the document are mechanisms for compliance. Every State has to develop action plans or strategies to comply with the Declaration. The UN Human Rights Council will monitor States’ compliance based on reports that States submit to the treaty organizations. The UN must also create an action plan to ensure its agencies are aligned on the issues of Indigenous Peoples’ rights, which the secretary general will report on before the General Assembly. The outcome document also says that the secretary general should name an Indigenous high level functionary.

When we talk about consensus we don’t necessarily mean that all the States are in agreement, but that they take on a commitment. Some States objected to certain paragraphs. For example, Canada issued a reservation against Free, Prior and Informed Consent (FPIC). The Vatican, which is an observer state, issued a reservation on the issue of reproductive rights. That was one of the issues that took the longest to reach consensus; it’s a problem among the States that doesn’t only have to do with Indigenous Peoples, but with human rights in general, because reproductive rights are not only a woman’s problem. Everything we’re talking about here is global rights, universal rights. The greatest accomplishment of this whole process was the opening of the UN to Indigenous Peoples, not just in the drafting of the document but in the organization of every one of the activities taking place. Maybe the ideal woud have been to have more Indigenous heads of state, but this was a tool to help us keep moving forward. It is not the end of the road.

Four months ago this all seemed impossible: it seemed like the best solution was to cancel the conference. So succeeding in just four months in changing the will of the States, achieving their commitment, has a lot to do with the strength of the Indigenous movement at the community level. We all need each other, we all complement each other. It’s like the Indigenous cosmovision: everyone complements everyone else. So I send a greeting to everyone and am grateful for the effort that you are making. Many brothers and sisters have fallen in this struggle. It is in their name that we keep moving forward, and in the name of future generations.