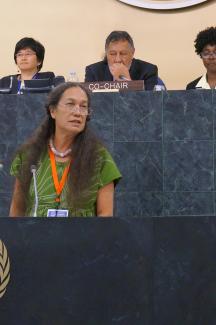 "Over the last 20 years the UN was called to have global consultations on issues of critical importance to the world. When it came time to have the world look at the issues of Indigenous Peoples, the promised world conference did not unfold and was not funded. Rather, they came up with a two-day high level plenary. The significance of it is that it will be the first time Indigenous Peoples are ever allowed to go higher than the Economic and Social Council. But of course, there’s not a significant amount of work you can do with a few hours for two days. I and many other Indigenous leaders that are participating are really here out of caution. We all know that the General Assembly has declared war in less than 15 minutes, so we run significant risks if we do not participate in what will be several hours of discussions relating to our lands, our human rights, and how we’re going to be treated in the post-2015 agenda. We’re here to participate, but for myself it is to hold a line—and as expected, the States are already beginning to disagree. So we see that progress may be made in some areas, but in critical areas we can’t even get it into the discussion document. We are really here
to hold the line and make sure they don’t diminish selfdetermination.

Like most outcome documents, States will interpret one way and Indigenous and civil society will interpret in other ways. For instance, the commitment of States to address Indigenous land rights with appropriate legislation doesn’t tell you that that legislation will bring justice. Rarely do you see a clear commitment coming from the UN. So what the value of the outcome document will be, will be a priority that we will have to follow up. The question is, will they interpret their obligations in the same way that we do?"