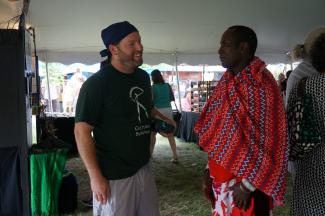 When Favreau first heard about Cultural Survival from a friend in 2004, he was working as a toll booth collector on the Massachusetts Turnpike. “I could not believe it. I was surprised there was an organization like this in Massachusetts, this close to Boston,” he recalled. He wrote to Cultural Survival and soon signed on as an intern. Favreau’s first assignment was to work with the Simba Maasai Outreach Organization helping to coordinate their United States tour. He was then asked to sell Cultural Survival Quarterly back issues door to door; the magazine was printed in black and white at that time, and was not as successful. He was successful, however, at selling ads in a program booklet for Bazaars and selling memberships at the Bazaars. “I made my desire known that I wanted to work for the organization and that I loved the organization. I really had a passion for making a difference,” Favreau said.

Cultural Survival Bazaars started in 1982 as a single, annual event on the Harvard University campus. In 2002 a Bazaar was added in Tiverton, Rhode Island; 3 years later Cultural Survival expanded the bazaars into one of its major fundraising programs, operating as many as 12 per year. Favreau first gained experience with the Bazaars in 2005 when he worked the membership table, regularly convincing as many as 5 percent of attendees to become members. In one weekend he recruited nearly 125 new members to Cultural Survival, and he became the full time program manager for the Bazaars in 2007. “From 2006 on, we worked a lot on improving fair trade standing of the products, bringing more artists in, the quality of the items, and bringing in more of the public,” Favreau said. “Seeing the artists really make a living out of doing their art and living their dreams through their culture and art, [was] the most rewarding part of my job.”

In his 11 years with Cultural Survival, Favreau has helped raised almost $6 million for Indigenous artists and fair trade vendors. He has attracted almost 400,000 people to the Bazaars and recruited about 1,000 new Cultural Survival members. His advertising and outreach for Cultural Survival has reached well over 1 million people. He has also raised approximately $100,000 in event sponsorships and school tours for the Simba Maasai Outreach Organization, La FOMMA (Fortaleza de la Mujer Maya/Strength of the Mayan Woman), underwriting for community radio programs in Guatemala, and other Cultural Survival fundraising efforts.

Favreau ends his time at Cultural Survival on August 4, right after the Harvard Bazaar, his 99th. “Although I am leaving Cultural Survival as an employee,” Favreau said, “the organization, the mission, all those I worked with and all those I worked for will forever be dear to my heart. I hope to help Cultural Survival in any way I can in the future, even with limited means, and hope that perhaps those reading this story will feel compelled to give a donation to a great organization doing amazing work in partnership with Indigenous communities all over the world."