Mamos and Cross-Cultural Dialogue ARE WE LISTENING? 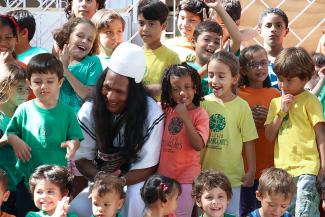 “We are all part of the ancient Sacred Circle of Life, and therefore we are all Indigenous Peoples of Mother Earth…. To embrace and reclaim our Indigenous relationship to all life is to remember and lovingly celebrate our sacred relationship with our Mother Earth, all relatives of our one human family and our kinship with all life.” — Chief Phil Lane (Ihanktonwan Dakota and
Chickasaw Nations)

Calixto Suarez Villafañe, an Arhuaco elder from the Sierra Nevada De Santa Marta, Colombia, is often asked by his elders: “Why does much of the world not comprehend our sacred interrelationship with nature and spirit?” Suarez is an emissary for the Mamos majores, or chief Elders of the Arhuaco and Kogi peoples, who rarely descend from their high mountain sanctuaries and are the spiritual leaders and knowledge keepers of the people of the Sierra. They are the descendants of the Tairona civilization, from which the Inca and Aztec also descended. Whenever Suarez returns from his travels, he drives three hours up the mountain and walks or rides a horse for another sixteen hours to report back to the Mamos majores and receive his instructions.

The peoples of the Sierra survived the onslaught of the conquistadores by retreating into mountainous sanctuaries in the Sierra. To this day, the Arhuaca, Kogi, and Wiwa do not wish to receive visitors. They have been able to maintain cultural and spiritual coherence through relative isolation, but they do want the world to hear their warning and their deep concerns about the precarious state of all life on Mother Earth. “Our ancestors left us in this space, caring for and harmonizing the Earth and humanity. We live in harmony with all [of] nature’s beings: water, earth, fire, wind, the sun, humans, and also animals and plants, which are essence of the divine,” Suarez says.

As an infant, Suarez was not physically well and his mother left him to his grandmother’s care. He recalls, “It was then that I started being trained with the Mamos, with them I came to understand and comprehend life in general. I learned about the four worlds, about the Earth and the universe. The elders told me about the living beings, nature, and the sacred sites, which today I call energy points, where the Mamos do their spiritual [offerings] in order to harmonize. The Mamos say that the Sierra Nevada in Colombia is like the heart of the Earth. İ began to analyze why it might be the heart, and then I understood: the sacred sites in the Sierra are interconnected with many other sacred points of the planet and form part of a network, which is connected to the universe.”

Suarez speaks of the differences between Western scientific methods and traditional knowledge systems; whereas Western science is defined by analysis by objective separation through dispassionate observation, traditional knowledge systems are founded on an intuitive and spiritual relatedness, where time-honored observations are firmly grounded in the knowing that all is related and interconnected, and the observer is a vital part of the system being observed. “The primary principles we teach our children and our community are to live with, look after, and harmonize with all of life. We believe that all people have the right to a piece of land to care for and cultivate. We believe in equality. Everyone takes part in the community’s decisions, even the young girls and boys. Our tradition is that of meeting, talking, thinking, and deciding together. We always aim to be connected. This is where our strength lies, and this is how we manage any conflicts that may surface,” says Suarez.

Suarez has served as director of 1Earth Institute, Inc. since its inception as a nonprofit organization in 2016. 1Earth Institute, Inc. is based in the U.S. and Australia, and works globally on the integration of sustainable solutions from a shared knowledge base. Maori elder Pauline Tangiora, who was featured in the March 2018 issue of the Cultural Survival Quarterly, is honorary director. At the heart of the Institute’s educational programs and corporate training is inspiring the reclamation of a wiser consciousness to inform corporate and civil policy decisions. The Institute strives to form the building blocks for a common language that bridges cultural barriers and decolonizes mainstream thinking.

Dialogue circles are integral to the Institute’s programs and are inspired by the way the peoples of the Sierra—as many other Indigenous Peoples around the world—reach consensus. When an evaluation of a conflict is required or fundamental decisions are to be made, the Mamos gather in the ceremonial house, the nuhue, and no one leaves until the issue at hand is resolved collectively and by consensus. Only water and minimal amounts of corn are dispensed during this process, which can take days to conclude.

Dialogue circles are used by many traditional cultures around the world; in Australia, they are often called “yarning circles.” Whatever form they take, their protocols have in common inclusive and collaborative processes where deeply held assumptions, perspectives, and beliefs can be safely explored to encourage fresh and original insights to emerge. Defending and challenging assumptions often can give rise to discussions with a high emotional charge. The process is not about convincing one another and being right, but rather to encourage one to see the other’s position and to open a dialogue between the proponents of polarized views.

1Earth Institute held a two-day-long series of three cross-cultural dialogue circles at the Museum of Indian Arts and Culture in Santa Fe, New Mexico, in October 2017. The circles are always facilitated by an Indigenous and a non-Indigenous dialogue leader, and in New Mexico they were co-led by Suarez and Glenn A. Parry, author of Original Thinking, a book inspired by the “Language of Spirit” conferences from 1999–2001, which brought together Native and Western scientists. Santa Clara Pueblo Governor Walter Dasheno welcomed participants and presided over a closing ceremony on the second day when gifts were exchanged. Uqualla James, advisory board member and former long-standing Havasupai Chief, led the circle participants in mind-body exercises. Three dialogue circles were held over two days, with each one building on the previous with questions facilitated by the co-leaders. Participants understood that the root of our problems must be addressed: our thinking.

“As Mamos, we are harmonizers and guidance counselors,” Suarez says. “The Mamos are calling for a radical change, a transformation. Until now, what human beings have reached for is self-destruction, the destruction of Mother Earth, of mountains, the poisoning of the sea, of rivers, of the lakes, the reduction of the flora and fauna. We are seeing how we are impoverishing the planet and those who live there. Humans have strayed from their path and are accelerating their self-destruction. The natural law is simple: humility to take from nature, to give back, and to maintain balance spiritually and physically. For us, the Arhuaco, humility is a sign of wisdom. That is what we want to pass on to future generations. The Mamos invite us to discover again our truthful identity, our ancestors, our roots and taking care of these roots, and of the knowledge of the Mamos. In this way we can arrive into the deepest aspects of this knowledge and transmit it to others.”