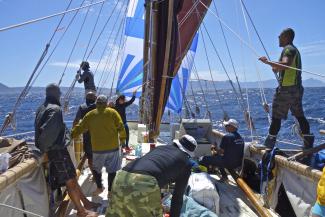 This article is the fourth installment in a series documenting  the historic undertaking of the three-year voyage of Hōkūle‘a,  a full-scale replica of a wa‘a kaulua (Polynesian doublehulled voyaging canoe) around the world.

South Africa is indeed an amazing place. It is the farthest shores that Hōkūle‘a is able to sail to on this World Wide Voyage. South Africa holds the antipode of Hawai‘i, the opposite side of the Earth. The only equal to this amazing land are its amazing Native people and its wonderful leaders of peace.

The East coast of Africa is the most dangerous sailing that Hōkūle‘a was expected to traverse on the entire World Wide Voyage. It is along this coast that the infamous Agulhas current speeds south, roughly following the contours of the coastline. The low pressure storm systems that rush from south to north, coupled with the opposite flowing current, were our greatest concern, along with the continental shelf that breeds rogue waves famous for breaking large tankers and barges.

Hōkūle‘a was not built to withstand these types of harsh weather conditions, so we had planned to travel this coastline during the low season. However, upon arrival in South Africa, we found that this season was unlike any other. Although we were going into summer, we were still experiencing winter weather. We set aside 30 days to travel from our first landing in Richards Bay to our final stop in Cape Town, a distance that would normally take only 7 to 8 days in perfect weather.

The first landing of our beloved canoe on African soil was in Richardsbaai (Richards Bay) at the mouth of the Mhlatuze River. We were welcomed by the Natives of the area, the Tsonga and Zulu tribes, and exchanged song, dance, and words of greeting before welcoming them onto our canoe for a tour of this strange and small vessel that had sailed to their land. As Mālama Honua (Care for the Earth) is our mission statement, we were brought to the Isimangoliso World Heritage Park, where the natural and cultural resources of that land are protected. We were in awe of the natural beauty of the people and place, and as is our custom, we memorialized this moment in chant.

Hōkūle‘a is the canoe that travels to distant seas

The canoe that connects people and traditions from afar

Hawai’i is the little coral, growing into an island

An island continually growing as the lava reaches the sea

Africa is the matured island, a vast and expansive island

At the mouth of the Mhlatuze River we arrived

A beautiful land, a verdant land

A powerful land, a land where caring for the earth lives

Isimangoliso will be famous throughout our homeland

Your name will live in our history

Isimangoliso of the wondrous land

In Richards Bay we met the great folks of the NSRI-Sea Rescue volunteer organization, who are tasked with keeping mariners of the South African coastline safe. They shared freely with us their knowledge of the coastline and the weather patterns, giving us great insight on the safest times and conditions under which to set sail. There is no value greater than local knowledge of place.

When the weather once again settled down we left Richards Bay and made for the quickest course to Durban, the second largest city in South Africa. There we were privileged to meet Ela Gandhi, the granddaughter of Mahatma Gandhi. We visited several schools and sites that her foundation supports to care for those in need. We also met a group that teaches surfing to homeless youth to help heal and inspire them. We witnessed much homelessness and poverty, but also great acts of compassion.

We left Durban for East London, but as we neared East London the safe window to continue opened up, so we continued on to Port Elizabeth, arriving before noon. As evening approached, so did a large storm with gale force winds clocking in around 65 miles per hour. In spite of the large storm, we were safe. We had followed the advice of those who knew the area and read the signs signaling the impending bad weather, and we were prepared. It was a short stay in Port Elizabeth before we let loose the docking lines and continued south.

Our next landing was in Mosselbaai. There we visited the caves of our collective ancestors, the caves that mark the origin of thinking man. We, the youth of this Earth, made the trek to our original ancestral land, and we did it on our ancient ocean pathways. As we stood at the mouth of those caves, we were not Hawaiian. We were not American. We were not African. We were simply Human.

As we left Mosselbaai, we learned that we had sailed the farthest possible from our home land of Hawai‘i; from here, every inch, every mile, would take us closer to our beloved home, no matter what direction. It is indeed fitting that we sailed to the farthest reaches of the Earth to find our ancestral land. We hoisted our sails, and sailed on.

In the early morning hours we passed Cape Agulhas where the Indian and Atlantic oceans meet, the southernmost point of Africa. We continued on to Simon’s Bay where we met Craig Foster, a filmmaker famous for his work with the Indigenous bush people of Africa as well as bringing attention to the rich and diverse ocean resources of that area. Some of our crew were able to go for a cold water swim to truly experience nature and the verdant underwater resources of the area.

We raised our sails again and left Simon’s Town for our final destination of Cape Town. Around midday we passed the Cape of Good Hope. In the spirit of Good Hope, we celebrated a little, thanked each other, shared hugs and breaths, and took some pictures to memorialize the occasion. As we got closer to the port, I had an unusual feeling. We knew the Wild Coast was the most dangerous coastline we would traverse, and the most dangerous leg of the voyage, but it hadn’t been overly rough. Why was I having this feeling? Was it just the sadness of the leg coming to an end?

As we entered the port, we were cleared to the finger pier alongside Key 6 where a tent was being set up for our welcoming ceremony that would be hosted by Archbishop Desmond Tutu. We were greeted with much Aloha and Ubuntu. I was humbled to meet the Archbishop and greet our families and supporters who traveled halfway around the world to meet us. Students from Kamehameha Schools and Hālau Kū Mana greeted us with song and dance, which was met with song and dance from local tribal youth.

After the ceremony I met one of the workers who was setting up a huge white tent located on the opposite end of the pier from our welcoming that I had first seen as we were coming in. I learned it was to hold a memorial for 12 sailors and fishermen from a 138-foot fishing vessel who lost their lives after abandoning ship when their vessel took on water in high seas during a storm in False Bay—the same bay we had just left prior to arriving in Cape Town.

Those strange feelings I previously had were instantly replaced with humility and enormous gratitude. Gratitude for the skill and foresight of our leaders; for the assistance, support, and knowledge freely given by our NSRI-Sea Rescue friends and other local knowledge holders; for those who supported us from home and afar; and to our God for keeping us safe through these dangerous waters. We arrived safely. We met our goals. Hōkūle‘a is ready to continue around the world. Life to Hōkūle‘a, Eō!

Read this article in Hawaiian at goo.gl/ZOC6KI.

The crew keeps a sharp lookout approaching the Wild Coast on a downwind run.

ALL PHOTOS COURTESY OF KAIMANA BARCARSE.