Making Peace with Atabeira in a Time of Climate Crises 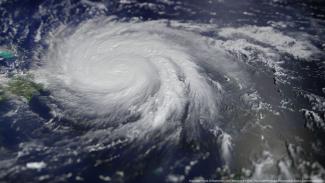 In the days preceding the arrival to Caribbean shores by Christopher Columbus in 1492, the Caribbean Sea was referred to as Atabeira (Ah-tah-bay-rah) by the Indigenous Taíno Peoples. The term is used to describe a powerful and generous Earth Mother, who, for the Indigenous islanders, is manifested in more than just the lands; she is the life-giving waters of the bountiful sea. This was, and for some, continues to be, a harmonious, spiritual relationship linking appreciative peoples to life above and below the waters.

Following the voyage of Columbus, however, this sacred relationship was brutally disrupted and subsequently replaced over centuries by a mainstream acceptance of patriarchal dominion over the natural world. In the Caribbean, the commodification of the environment, as well as peoples of color via the institutions of slavery and semi-slavery, begins with Columbus. The intergenerational promotion of his unsustainable, exploitative worldview continues to adversely affect all life above and below the waters even today. In fact, this harsh reality may also affect future generations in the Caribbean, as the very possible collapse of ocean ecosystems will have long lasting, dire consequences.

The Caribbean islands are the ancient homelands of the Taíno and other Indigenous Peoples such as the Kalinago, Garifuna, and Lokono, as well as other Arawakan peoples. These islands comprise a massive, crescent-shaped archipelago southeast of the interconnected watershed of Gulf of Mexico and the North American mainland. The Caribbean island chain is east of Central America, north of South America, and west of the Atlantic Ocean. The archipelago is divided into two main regions, including the Greater and Lesser Antilles. The latter is subdivided into the Leeward Islands, the Windward Islands, and the ABC Islands.

The island of Bermuda and the Lucayan Archipelago, which includes the Bahamas and the Turks and Caicos, are often considered a part of the region. However, these islands do not border the Caribbean Sea. In the strictest sense, the phrase “Caribbean countries” would refer only to the insular sovereign states and insular dependent territories, but the term has varied uses today. In its widest application, the phrase includes Central and South American countries that border the Caribbean Sea.  The Caribbean region sprawls across more than one million square miles, most of which is ocean.

Columbus called the Caribbean islands the closest place to paradise on earth. These islands support an impressive and fragile biodiversity within diverse marine and terrestrial ecosystems, including high proportions of endemic plant and animal species. The average temperatures in this tropical maritime region, at least historically speaking, do not vary much throughout the year. Temperatures normally fluctuate between 75–85 degrees Fahrenheit regardless of season. The region is also normally blessed with favorable trade winds, which for the most part make the days and nights relatively comfortable even with high year-round humidity. The rainy season arrives in the autumn months, while the hurricane season usually spans June through November.

As colonialism advanced through the region from the early 15th Century conquest period and urban development increased, tourism also increased, while agriculture declined in relative importance. Despite the periods of rain and storms, tourism remains a critical industry for the Caribbean regional economy. Given the importance of tourism, when discussions on the Caribbean climate shifts to climate change, government officials, business leaders, and members of the local communities and Indigenous Peoples continue to express great concern.

Climate change is introducing other significant challenges that impact the relationship between those on land and the sea. A recent study on small island developing states by the Inter-American Development Bank, for example, estimates that one out of five residents of the Caribbean and the Pacific Islands live in low elevation coastal zones, which are defined as areas with elevations less than 10 meters above sea level. The 2017 study, entitled “A Blue Urban Agenda: Adapting to Climate Change in the Coastal Cities of Caribbean and Pacific Small Island Developing States,” also identifies coastal erosion as cause for concern, as this condition, along with coastal flooding, is expected to continue to negatively impact economic output and employment, which in turn could aggravate inflation and increase national debt across the region.

One of the greatest threats climate change poses in the Caribbean is the increased intensity of tropical storms and hurricanes. Although climate change is not causing the storms, scientific studies affirm that rising temperatures in the oceans and atmosphere are not only helping to strengthen the storms, but are also intensifying these storms at faster rates. The aftermath of Hurricanes Irma and Maria provide the most recent and stark examples of the devastating effects of these destructive forces in the region. Additionally, these storms provide opportunities to review how well prepared governments are for these extreme climate-related events, and who within these insular populations are the most adversely affected. Unfortunately, when it comes to climate impacts, the evidence is clear. The poorest members of the population are the most exposed, and the least protected, against climate risks.

While the contemporary populations of the insular Caribbean can in a sense be considered ethnically heterogeneous legacies of the imposed colonial societies, Indigenous Peoples are verifiable minorities across the region’s independent and dependent countries. Many Caribbean Indigenous Peoples fall within the category of economically impoverished. Granting that livelihoods vary from country to country, a number of Indigenous descendants still engage in the agriculture and fishing sectors, as did their ancestors. The effects of climate change on land and in the sea directly and indirectly affect these communities as well others. In Indigenous Kalinago Territory on the island of Dominica, for example, early reports indicate that a majority of homes in the reserve land were lost in the wake of Hurricane Maria. More than a month after this same storm hit Borikén (Puerto Rico), local communities, including Taíno community members in the interior areas of the island, still had received little or no relief assistance from the government sectors.

Beyond the effects of hurricanes, decreased rainfall and subsequent droughts are other climate related concerns in the Caribbean. These conditions impact agriculture, raise food prices, increase the likelihood of brushfires, and decrease water storage and flows. Rising temperatures in the sea are also exacerbating the degradation of coral reef systems across the Caribbean. A recent report by the International Union for Conservation of Nature noted that collapse of coral populations and overfishing are pushing many fish, including food sources like tuna, red snapper, and grouper towards extinction. When the impacts of poor policies and unsustainable development such as pollution and human-caused ocean acidification are added to the scenario, the image of the idyllic Caribbean paradise encountered by Columbus quickly begins to crumble.

The Indigenous Peoples of the Caribbean region have long sounded the alarm concerning climate and threats to the ocean ecosystem. In 2009, a diverse Caribbean Indigenous delegation joined other Indigenous Peoples from around the world in Anchorage, Alaska, calling upon States to work towards decreasing dependency on fossil fuels and a just transition to decentralized renewable energy economies, sources, and systems owned and controlled by local communities to achieve energy security and sovereignty. Yet, when looking at overall government response to the recent hurricanes, it seems the call to address the root causes of the global climate crises continues to be overlooked in deference to adaptation and mitigation strategies.

The governments of the insular Caribbean all committed to the United Nations Sustainable Development Goals and its main theme of “leaving no one behind.” Oceans and climate change are addressed in the global goals, and many current challenges can be addressed with strong political will that involves the meaningful participation of all stakeholders, including Indigenous Peoples, in national level policy and planning processes. It is time to once again make peace with Atabeira, address current inequalities, and recognize that the Old World philosophy of dominion over nature has failed. The lives of our present and future generations depend upon it.

— Roberto Múkaro Borrero (Taíno) is a programs and communications coordinator for the International Indian Treaty Council; president of the United Confederation of Taíno People; and co-convener for the Indigenous Peoples Major Group on the United Nations Sustainable Development Goals.

For more information on how Indigenous Peoples are engaging the UN Climate Change Process, visit www.iipfcc.org. To learn more about Indigenous Peoples and the UN Sustainable Development Goals, visit https://indigenouspeoples-sdg.org or http://bit.ly/IITC_SDG.