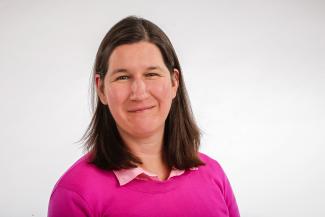 Our series spotlighting the work of our Board members continues with Nicole Friederichs, an attorney specializing in federal Indian law, Indigenous Peoples’ rights, and international human rights law. She is currently a Practitioner-in-Residence at Suffolk University Law School and manages the school’s Indigenous Peoples Rights Clinic.

Nicole Friederichs' interest in Indigenous Peoples' rights blossomed in her last semester at Suffolk Univerity Law School in 2003. She recalls: "I had done international development work previous to law school, working on education and community development mostly in West Africa. But then I took an Indigenous Peoples’ rights class with professor Lorie Graham. I remember sitting in class and the language of Indigenous Peoples rights felt very familiar to me in that it is similar to the language of international development. I felt comfortable with it. I ended up getting a job after law school in Boston working for a solo practitioner who represented several tribes in the New England area, and I’ve been doing this work ever since.”

For the next four years Friederichs practiced law in New England, working primarily on a handful of federal cases addressing the jurisdictional reach of states over federally recognized tribes and their lands. “The issues in those cases were varied,” she says. “For example, a state’s human rights commission had jurisdiction over a tribe’s government employees or whether a state could exercise a search warrant against a tribal government on tribal lands. However, each of the cases centered on the interpretation of federal laws settling the lands claims of these tribes. Those laws resolved the land claim, but went further and addressed the application of state laws to tribes. The ultimate issue in these cases was about who had jurisdiction.”

By 2007, Friederichs found she was missing international work. “I really enjoyed working on those federal cases, but it was purely federal Indian law. I’ve always leaned towards international issues and work, probably in part due to the fact that I grew up internationally,” she says. Friederichs was born in the United States, but at the age of three her family moved to Hong Kong, then Frankfurt, Germany, and later to London; she returned to the US for college. In an effort to transition from purely domestic work to international Indigenous rights work, Friederichs moved to Tucson, Arizona and completed her Master of Law (LLM) degree. “For 18 months, I studied and worked at the University of Arizona’s Indigenous Peoples Law and Policy program. [UN Special Rapporteur] James Anaya and Robert Williams teach there, and I was fortunate to have the opportunity to study and work with them. Plus, I was able to get hands-on experience working on international Indigenous Peoples’ rights cases. It was a wonderful experience. I continued working on international cases and issues for a couple of years and then got settled at Suffolk.”

For the past three years Friederichs has directed Suffolk’s Indian law and Indigenous Peoples’ rights clinic, which supports the advocacy and nation-building activities of primarily New England tribes and Indigenous organizations. “We meet that goal by providing opportunities for law students to develop their lawyering skills by working with tribal organizations or communities on a variety of issues,” she explains. “At Suffolk we have a very well developed clinical program with over a dozen clinics devoted to different areas of law, such as family, immigration, housing, and intellectual property. Our mission is to provide students with an opportunity to develop their lawyering skills by taking ownership of a case or project on behalf of a client; as their supervisor, I meet with them weekly to advise them on their work and progress.” One example of the type of work the clinic does is drafting of laws and court rules. Friederichs says, “Over the past three years we have been working with the Mashpee Wampanoag Judiciary to draft procedural and evidence rules for their court system. Last year they adopted rules for their lower court, and we’ve been working on rules for their Supreme Court as well as developing materials to assist tribal members in navigating that court system. I currently have a student working on their peacemaking court.”

In this type of work, Friederichs says, “We always try to include any customary practices. The rules that we drafted, for example, look very different from the rules of the Commonwealth of Massachusetts or the federal government. The Mashpee Wampanoag felt the federal laws they had been using were just too long, too legalese. They wanted something more accessible for everybody. With the tribes here in New England, it’s all about rebuilding. Whether it’s language, whether it’s laws—they are still trying to access that almost lost knowledge. The elders with whom we worked will talk to the Wampanoag language department and ask, ‘Do we know anything about any customs, laws, or traditions that we might be able to incorporate into this law or rule?’ The clinic supports the nation-rebuilding that is occurring in Indian country. We want to make sure a tribal court reflects the customs, the culture, the practices of the community. If it does, it will be sustainable, more utilized, and more successful in meeting the needs of the community.”

In the international realm, Friederichs has been working with Cultural Survival to promote Indigenous rights in Guatemala by assisting in the battle to legalize community radio. “In Guatemala, Indigenous communities have been trying for a long time to change the telecommunications law to legalize community radio. They filed a lawsuit in their Constitutional court back in 2010; that court basically said it couldn’t force Congress to change the law, so (Cultural Survival’s deputy executive director) Mark Camp and I started discussing other options, such as whether Suffolk’s Clinic should file with the Inter-American Commission on Human Rights on behalf of Cultural Survival and other Indigenous rights organizations in Guatemala. We decided to move forward with the petition, which was filed in September 2012; the Commission is still in the process of reviewing it. The hope is that by filing a petition with the Commission and the UN Special Rapporteur on the Rights of Indigenous Peoples, which we did a couple of months ago, that we draw more international attention to the issue and put some pressure on Guatemala to change.”

Regardless of the stage—whether domestic or international—Friederichs sees an opportunity for positive change. “International human rights law provides the United States with the opportunity to revisit our own laws and determine whether we are meeting our international obligations,” she says, pointing out that “although the United States has in place several protections for its Indigenous Peoples and recognizes some of their human rights, there is still room for much improvement. Plus, the foundational principles of federal Indian law, such as the doctrine of discovery and Congressional plenary power, which are still good laws, arguably do not meet international human rights standards.”

But, she continues, “Here in New England, more and more people are taking an interest in what is going on in the international Indigenous rights arena and even utilizing human rights bodies as part of their advocacy efforts. When Anaya delivered an address at Suffolk last year, many tribal leaders and community members were present. And within the area of nation building there are also many success stories. For example, Jessie little doe’s story of language reclamation with the Wampanoag Nation (see page 14) is such a great one. Whether it’s working with the tribal court to better meet the needs of its tribal members or filing a shadow report to the UN Committee on the Elimination of Racial Discrimination, that’s the positive work that the clinic does and the type of work that I find personally fulfilling.”