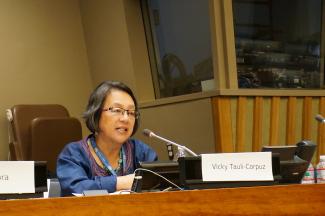 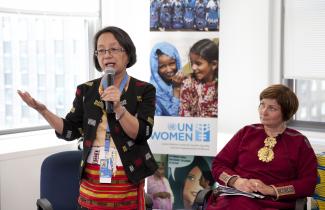 Cultural Survival spoke with the United Nations Special Rapporteur on the Rights of Indigenous Peoples Victoria Tauli-Corpuz (Igorot from The Philippines), former Cultural Survival board member, at January’s Expert Meeting of the UN Permanent Forum on Indigenous Issues in New York.

Danielle DeLuca
What are your priorities for the next year during your term of Special Rapporteur?

Victoria Tauli-Corpuz
Well, basically I would like to focus on the issue of collective rights of Indigenous Peoples, which of course focuses on the issues of lands, territories, and resources, as well as the right to self-determination. When I made my report before the Human Rights Council and General Assembly, I said I’ll be putting a focus on economic, social, and cultural rights in general.

I don’t know if he hasn’t explored it, maybe but not as deeply as I would like to, but one of the issues I’d like to look into is investments; both public and private investments and the impact of this on Indigenous Peoples’ rights. The directions of economic development that most countries will take depends a lot on the investments that are coming into the country. Of course if these are investments are in relation to extracting resources, it’s almost always sure that many of these resources are found in Indigenous Peoples’ territories. So it makes sense to go more deeply into the conditions upon which these investments are attracted: what are the benefits or incentives pro- vided to [Indigenous Peoples]? Will this mean that the respect for human rights of Indigenous Peoples, like their land rights and Free, Prior and Informed Consent will be undermined? Many governments would like to attract to these investments, so that’s one area I would like to look into. I would also look into the situation of Indigenous women and children. Former Special Rapporteurs Rodolfo Stavenhagen and James Anaya haven’t really done thematic study on that, so I will put a little stress on that as well.

What suggestions do you have for Indigenous communities on the best way to make use of your position? How do they invite you to visit their country to investigate their issues?

Several ways. First, of course, there’s the communication procedure that my mandate allows, of which I can receive allegations of human rights violations from Indigenous Peoples from all parts of the world. I can communicate with the [accused] governments, asking more questions and can also put forward some recommendations on how to deal with such situations.

What is your assessment of the Outcome Document from the World Conference on Indigenous Peoples? Were you happy with the way it turned out?

I think so. It does capture a lot of the key issues that Indig- enous Peoples have raised. I have been part of the process of the World Conference as an Indigenous leader myself, and in fact I chaired the Alta Conference where the global preparatory meeting took place. I must say that it didn’t capture everything we had in the Alta Outcome Document, but in general terms it did capture the most basic issues of Indigenous Peoples whether it is related to lands, to Free, Prior and Informed Consent, or the need to look more deeply into how the Declaration is being implemented. For us to be able get the states to commit to those is already one big step. The next step is to really raise awareness of Indigenous Peoples and decision makers on this Outcome Document and get the duty-bearers to really do what they need to do, as well as Indigenous Peoples to assert and demand what the governments have committed to implement the contents of the Outcome Document.

You have talked about different governments going through a Free, Prior and Informed Consent process, but not neces- sarily abiding by the way it was supposed to happen. Can you talk more about that and what an evaluating body might look like?

It is incumbent on governments to go through a genuine Free, Prior and Informed Consent process, but in my work as an activist, I’ve seen how the process of obtaining this con- sent is very much engineered or that the corporations are the ones given the bigger say on how to conduct Free, Prior and Informed Consent. In the Philippines, for instance, the government doesn’t have any money allotted for the National Commission of Indigenous Peoples who are supposed to obtain FPIC. They allow the companies to pay for everything to be able to get that consent.

In most cases, the complaints that I receive is that FPIC was not obtained in the right way. There were people who were bribed, there were some tribal councils which were artificially created to give the consent; these are the kinds of stories you hear. So my feeling is that there needs to be more objective monitoring on how this is obtained, and then there should be a grievance body where Indigenous Peoples can complain if they feel like the government has not done rightly. There should be somebody who can assess objectively the whole process and say that this has really not been done in the right way. I think that kind of body will be important, [but] I don’t know which body that is going to be. When I was on the Permanent Forum we thought that maybe that would be one of [our] functions to a certain extent. The right mechanism would help make this process right in terms of involving the ones who are directly affected, as well as taking into account the views and concerns of States and third party organizations.

I think that an “optional protocol” is a very loaded term. It’s always connected with a legally binding treaty. So, maybe we can think of other terms which can be used which are not that loaded, like calling for a voluntary guideline on how the UN Declaration can be implemented more effectively and that can be a tool that governments can use in assessing their ways of adhering to the Declaration.

Would you comment on the concept of rights ritualism? Have you seen that in your dealings with governments, and do you have any thoughts on ways to avoid it?

Well, I think that is always happening in many places, even in my own country, where governments will ratify many of these conventions because of course they would like to have a higher stature in the international community. In practice, it’s not very easy for them to comply with these treaties that they have signed in the UN Declaration, so basically that’s what rights ritualism means. Sometimes it’s also the meaning of the term “ritualism” that I am not so comfortable with. Indigenous Peoples have rituals which they really take seriously, so I would suggest another term be used: it’s more tokenism, as far as I’m concerned. You know, governments claim that they have ratified all these [conventions], that they are submitting reports, but when you see the substance of the reports, there’s virtually nothing that can be satisfactorily assessed. So I think that’s more the point—that we cannot just agree to token moves or steps taken to claim that they are adhering to their obligations, when in essence nothing has changed for Indigenous Peoples.