Made in the Shade: Mixe Coffee Farmers Cultivate Sustainability 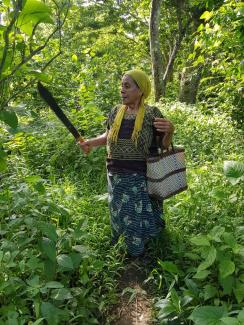 “Coffee is as if it  belongs to everyone, because we all cut it.” — Paula Reyes Pérez

Paula Reyes Pérez is a 68-year-old Ayuuk (Mixe) woman living in the mountainous community of San Jose El Paraiso, a part of the northern highlands of Oaxaca, Mexico. Oaxaca is the most culturally and biologically diverse state of Mexico, but it is also one of the poorest in the country. Reyes is a coffee producer with two coffee farms, one in the ta’ag naax, or the zone next to the river, and another in the këjx wiin (slope area, near the community). Reyes has been a tireless single farmworker even before she was married, and later widowed 10 years ago. She goes out several times a week, accompanied only by her machete, to visit her coffee farms. On the days she goes to the farms, she gets up in the morning, goes to the mill, lights the stove, and prepares her tortillas and food that she wraps in a napkin to take with her.

On her way, Reyes greets her fellow townspeople. Upon arriving at her coffee farm, she walks through it and cuts the trees that do not have space to grow, supports the trees that are not growing well, and prunes a branch here and there. She knows her coffee farm like the palm of her hand. Singing, she checks the color of the leaves and notices the smells that evoke dry or rainy times. In each season she does different tasks to maintain the coffee farm. Sometimes she takes a young coffee plant and transplants it; sometimes she takes one that has germinated on its own and places it somewhere with enough space to grow. This tireless dedication to her plants is why, when the coffee rust fungus almost put an end to the production of coffee in the village, Reyes was still harvesting.

Reyes’ work is much more important than she imagines. Her coffee farm, together with that of her neighbors in the town of San José El Paraíso, conserve many species of trees; 85 in total, and almost the entirety of the remaining medium subperennifolia forest (the original forest type in this area)  in the community. Although coffee is native to another continent and was introduced to the Mixe mountains only about 100 years ago, it was well embraced, as it could coexist with one of the most sacred things for the Mixe people: the mountains. The trees that grow on the coffee farms are kept there for many reasons, some without “explicit importance,” to use an economic term. As people in the community say, some trees are of no use to humans, and are just there to be eaten by little animals. This respect for other lifeforms is a main factor contributing to the high biological diversity of coffee farms in the region.

Coffee farms are an important part of family and cultural life in the San Jose El Paraiso community. Community members collect firewood from trees, such as tuut kop—always from fallen or pruned branches of old trees, never from young and strong trees. They harvest edible wild leaves, as well as fruit such as ujty (avocados), tsa pox (lemons), and tsaj tsuuky (oranges) that are planted among the coffee trees. They gather raw material as wood for different uses, such as pi’k maxy used for shovel handles; medicinal plants such as ëëk to cleanse the kidneys or the nëmu’um to cure fever; and the pa’aj teyk tree for use in ceremonies.

Coffee is harvested collectively in the community. At the end of the year the people get together to help each other. Neighbors, family, friends, compadres, and churchmates agree to help harvest the coffee in one person’s coffee plantation, and then that person helps the others. In this way, the work is distributed and makes it possible for single women like Reyes to continue producing coffee. Coffee could not be harvested without the effort of women, as they are responsible for maintaining collaborative relationships in the community.

Reyes, along with the producers of San José El Paraíso and all the shade grown coffee producers in the world (who are mostly Indigenous people from small communities), benefit the whole world when they grow their coffee. Unlike the mechanized coffee plantations where coffee is grown without shade or with only one type of tree, a Mixe coffee farm is made up of coffee trees, dozens of other tree species, and animals, whose ecology is similar to that of a forest. Maintaining bio-diversity and ecological relationships with attentive care, these coffee growers maintain the temperature of the environment, clean the air, retain soil and avoid erosion, recharge the groundwater, generate oxygen, and capture carbon.  When Indigenous communities manage coffee farms, there is a positive impact on the environment; unlike management by large companies, which too often results in eliminating most, if not all, other species and dramatically changes the local ecology.

Despite the great benefits of coffee and its careful tending and the invaluable knowledge involved in cultivating it, coffee production faces problems. Certification processes are complex and expensive. Although it is produced organically, small producers do not process and sell a finished product because the machinery needed for grinding and roasting the beans is very expensive. Further, coffee commodity prices are extremely variable and depend on the world market, which generates economic insecurity. Coffee rust fungus has damaged many coffee plantations and caused losses of more than 50 percent of the coffee plantations, which has considerably reduced the harvest in the community. To improve the health of coffee farms it is necessary to plant new plants, but the costs are high and young labor is in low supply because of migration.

Still, in spite of these challenges and the complexity of its production, Indigenous growers like Reyes continue walking in the mornings to their coffee farms, tending the trees and the animals that live in them, so the rest of the world can start their day with a cup of coffee. The next time you drink a cup, remember to ask yourself: did my coffee grow in the shade? Who produced it? Does the producer earn enough? You can help make sure this is so by buying coffee from small producers and cooperatives that is shade grown and fairly traded.