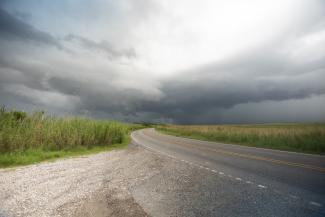 “We are taking this effort . . . so we can maintain the integrity of the community.” – Elder Shirell Parfait-Dardar, Grand Caillou Dulac Band of Biloxi-Chitimacha Choctaw Tribe

On July 26, 2022, the National Academy of Sciences, Engineering, and Medicine’s committee on Managed Retreat in the U.S. Gulf Coast Region held a day-long conference in Thibodaux, Louisiana. The concept of “managed retreat”—the intentional relocation of people, homes, and infrastructure from coastal communities facing climate change—was the subject of the conference. “Managed retreat” has been referred to by some as climate crisis capitalism, reminiscent of “urban renewal.”

Indigenous leaders of the First Peoples’ Conservation Council of Louisiana, an association of Tribes in coastal Louisiana working to identify and solve natural resource issues on their Tribal lands, shared their generational experiences of bearing witness to the environmental changes and injustices they’ve endured since the onset of colonization. The intentional relocation of entire communities not only causes distress for those communities, but carries with it a negative historical legacy and cultural genocide. Indigenous-led, justice-centered resettlement involves an extraordinary amount of cooperation, collaboration, and resources, including being consulted in decision-making.

The purpose of government agency-run managed retreat is to get people moved away from one location. It abandons efforts to create and support protection-focused and place-based adaptation measures and fails to mitigate land loss from rising sea levels. As in previous historical relocations, the decisions are prescribed without thought to community cohesion or ancestral rootedness. Homes and properties are bought out, infrastructure is shut down, and Tribal cohesion is harmed and broken. Like the Trail of Tears, Nations endure the stress and uncertainty of moving from homes and lands they have dwelled in and been deeply connected to for generations. 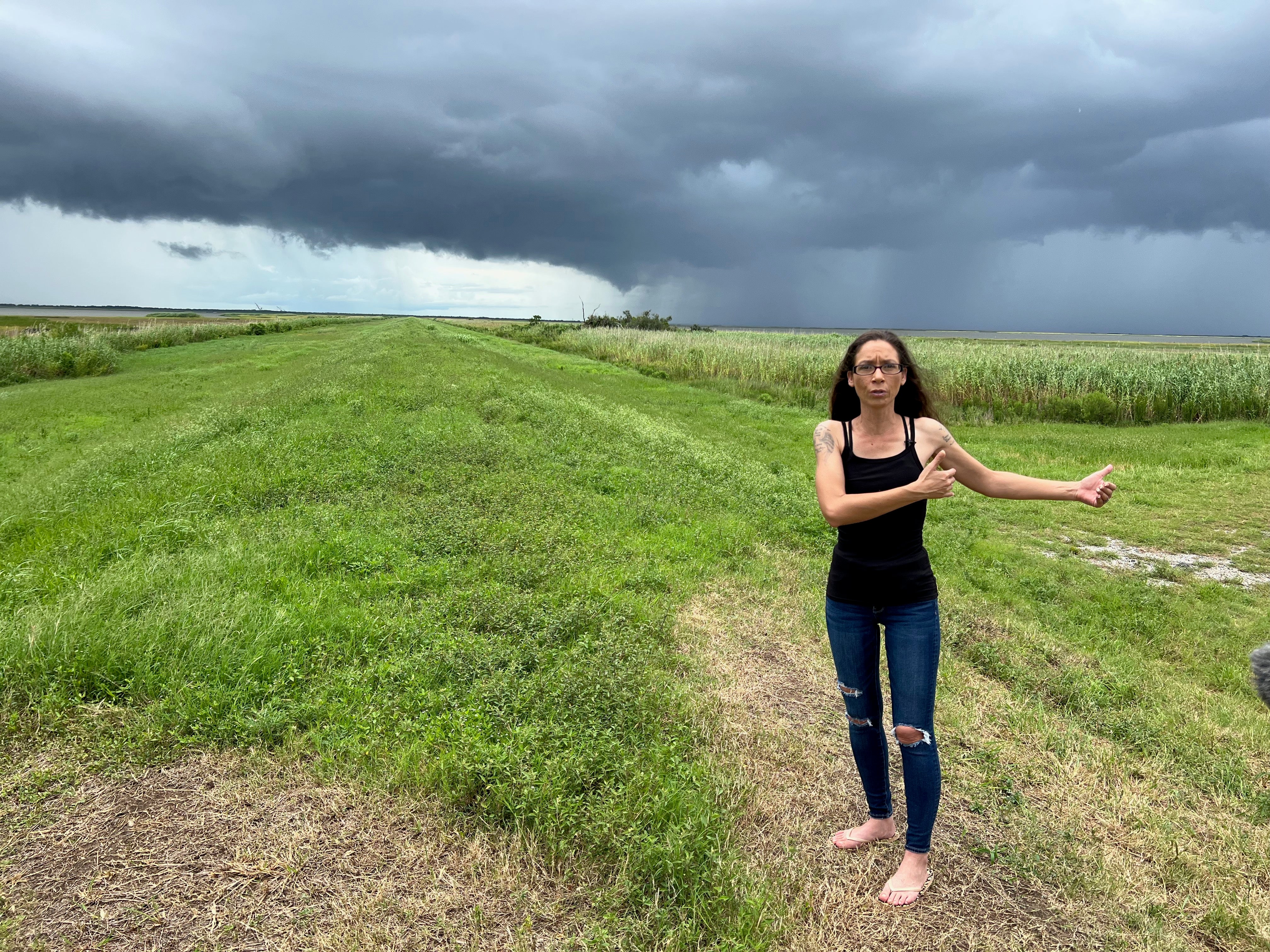 Elder Shirell Parfait Dardar of the Grand Caillou/Dulac Band of Biloxi-Chitimatcha-Choctaw Tribe stands on a levee in Chauvin, Louisiana, as a storm approaches. Photo by Michael Givens, UUSC.

Indigenous communities maintain a sacred and indispensable relationship with the land. Communities are built around that land and its history. Burial sites dating back generations hold the remains of ancestors from long ago, and the identity and culture of a Tribe is tied to their relationship to the land as well as the relationships between the Tribal members. Managed retreat upends the sovereignty and self-determination of Tribes and their citizens; it is a practice that ultimately disrupts the balance between the Tribes and the lands they hold sacred. Managed retreat also threatens to create a diaspora and a form of forced assimilation, as Tribal members may not choose to relocate their families together to one area, but rather spread out into other areas.

“The term ‘managed retreat’ seems to imply an organized exodus process; there’s no such process unless the people making the move are the ones who hold the power to say where, when, who, and how the retreat happens,” said Rosina Philippe, an Elder of the Atakapa-Ishak/ Chawasha Tribe located in Grand Bayou Indian Village on Louisiana’s southern coast, during a panel discussion. The Tribe is one of the few Indigenous communities in North America only accessible by water. Grand Bayou Village is not considering retreat.

Grand Bayou Village’s Atakapa Ishak/Chawasha people are looking to find and implement ways to live with the changes, researching ways to live with more water. They continue to advocate for not only their lifeway, but to speak on behalf of all of the other lives in the region—lives of flora and fauna, insect populations—all life forms that make human lives possible.


“People living in these areas for centuries have something to contribute to the conversation,” Philippe said. “The rights to ‘self-determination’ and ‘sheltering in place’ need to also be considered and have resources dedicated to making those decisions possible. I believe that we, as citizens of this country, should be afforded its protections, and we should have access to resources that would aid in providing basic necessities of life. Having access to safe housing, health care, and education is our inalienable right.” 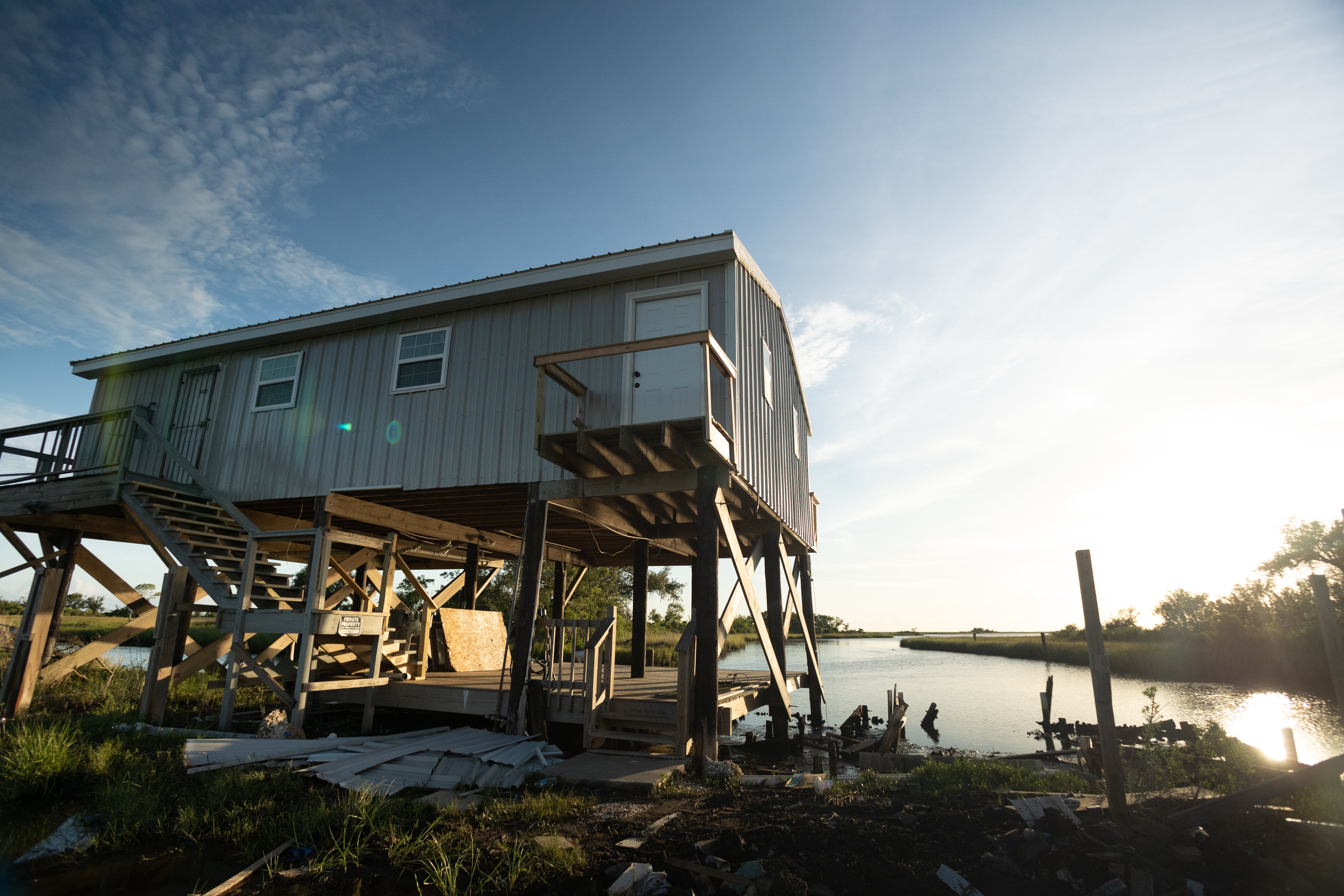 Tribal citizens are tax paying citizens, however, they are denied access to many taxpayer-funded resources because they lack a colonially-derived status of Tribal recognition. Lacking state and federal recognition is a barrier to being involved in any conversation, so federal and/or state recognition is a coveted status for some Indigenous Tribes. Recognition can lead to financial resources and support from the state and the federal government, but the process is time consuming and can be too costly. Several of the coastal Tribes have had pending petitions for nearly three decades while watching the gradual washing away of their lands.

Fellow panelist, Elder Shirell Parfait-Dardar of the Grand Caillou/Dulac Band of Biloxi-Chitimacha-Choctaw Tribe, echoed Philippe’s remarks. “If you have a group of people making decisions about a particular group of people and none of those people are there, you might want to be wary of any conclusions,” she said, stressing the anger and frustration of her Tribe not being included in conversations around how to most culturally appropriately and respectfully offer relocation to Tribal members.

No matter the Tribe, a key narrative that arises around managed retreat is the disrespect and disappointment that comes with being left out of discussions around how your own community will respond to climate change. “Communities or Peoples who are making the decision to relocate, that decision has not come easily,” Philippe said, noting that the stress of relocation is only compounded by being ignored by state officials who make unilateral decisions about when, how, and where Tribes relocate, if at all. “We cannot continue to be sacrificial communities.”

The Isle de Jean Charles in southern Louisiana once was 22,000 acres. Today, climate change has diminished the land to a mere 320 acres. Living with the climate change impacts and foreseeing the need to relocate, former Chief Albert Naquin of the Jean Charles Choctaw Nation worked tirelessly on plans to mitigate the impacts and, eventually, to relocate as a community. Elder Naquin and the other Tribes historically were once considered inland, “up the bayou” Tribes; the coast has come to them. The Mississippi Delta, which has been cut up for oil extraction, is peeling away, and some of the Tribes that historically sought safe refuge 40 miles inland from the Gulf are now having to find safe refuge elsewhere. This is difficult in an area that is mired in petrochemical production and contamination along with investment groups that are driving up land prices.

In 2016, the federal government awarded the state of Louisiana a $48.3 million block grant to assist with the Isle de Jean Charles Tribe’s (now called the Jean Charles Choctaw Nation) community relocation. For three years, an unproductive back-and-forth transpired between the Tribe and the state of Louisiana as to how to use the funds. In 2019, fed up with how discussions were going, Elder Naquin abandoned negotiations, claiming that the state had hijacked the funds and had no interest in keeping the Tribe’s members together as part of the relocation effort and honoring the Tribe’s vision. “If you believe that the resettlement of Isle de Jean Charles was successful, you’re headed in the wrong direction,” he said during the conference. The state of Louisiana has been making improvements to roads on and around the island, and it appears to be planning on turning the island into a recreational area, despite the protests of the Tribes.

The Isle de Jean Charles project is a heartbreaking and infuriating metaphor for how state and federal governments treat Indigenous Tribes in Louisiana, and many other states. Though the $48.3 million block grant was supposed to help the Tribe and its members exercise their right to self-determination, it ended up becoming a tool that the state used to advance its own agenda. Elder Parfait-Dardar has learned from Elder Naquin’s experience and is using it as a guide in how her Tribe addresses climate change impacts. “We understand that the climate crisis is pretty foregone…if we’re going to be resilient . . . that’s going to require some tough choices,” she said.

The Tribes are focused on leading coastal restoration and adaptation efforts for the betterment of the entire coast. They are drawing from their ancient wisdom and knowledge to build capacity through creative, low-tech adaptation and restoration measures, such as working to fill in the canals dredged in Louisiana’s wetlands in order to restore marsh ecosystems, reduce land loss and flood risk, and protect sacred sites. The First Peoples’ Conservation Council of Louisiana will continue its vital work of calling attention to the injustice heaped upon the Tribes and its work to ensure that the Tribes are fully involved in discussions around climate adaptation.

— The Lowlander Center in Louisiana supports coastal and bayou lowlands—human and natural—by honoring all Indigenous and diverse historied groups by visioning together a just and healthy future.