LISTEN TO OUR VOICES - INDIGENOUS WOMEN OF PANAMA 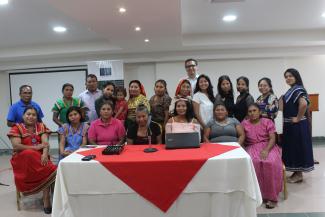 Entering Panama City, one may not know the rich history stored beneath the cracks of the sidewalks and paved roads, which, in 1510, absorbed the footprints of Rodrigo de Bastidas, who was sailing from Venezuela in search of new land and encountered the thriving civilizations of the Guna, Emberá, Wounaan, Ngöbe, Buglé, Bribri, Naso, and Dorasque peoples. Most Indigenous nations in Panama partially live on their ancestral lands as semi-autonomous reservations called comarcas. The Guna were the first to receive acknowledgment of their rights and are the most visible in Panama. The Ngöbe, Buglé, Wounaan, and Embera have also secured autonomous territorial rights in Panama, while the Naso and Bribri remain unrecognized.

At a glance, the rich, biodiverse landscapes and the famous Panama Canal evince the appearance of wealth. But behind the lavish facade, there is another narrative. Over the years there has been increasing investment in natural resources from third parties on Indigenous territories, endangering the ecosystems and safety of Indigenous people that live there.  Since the early 2000s hydroelectric dam construction has skyrocketed, with 24 operating projects and another 8 under construction. Illegal logging and mining operations have further scarred the land on which many Indigenous communities depend. It has been a constant struggle for Indigenous communities to defend their territories, and their resistance frequently results in violence and deaths. Still, Indigenous Peoples continue to resist via public demonstrations and legal demands for the implementation of the UN Declaration on the Rights of Indigenous Peoples and the constitution of Panama.

Indigenous women are often on the frontlines of these confrontations, vocalizing their rights: “We fight to recover,” said Antonia Morales Miranda (Ngöbe). “Forests are pre-served if our cultures are preserved,” added Mitzy Cunampio (Embera) from the Piriati Torti community. Cultural Survival has been at the forefront in supporting the Indigenous Peoples of Panama. In 2016, Cultural Survival co-organized with Fundacion Comunicandonos, the World Association of Community Broadcasters (AMARC) of Central America, and Voces Indigena Panama, the first Central American Indigenous Community Radio Conference in Panama. Community media has been an expanding platform for many Indigenous communities in exercising their rights to freedom of expression. “One feels lost not to speak their native language,” explained Karen Bonilla Sam (Ngöbe) from Changuinola, Bocas de Toro.

Radio has been a bridge for Indigenous communities in maintaining and revitalizing their cultures, identities, and languages, but there is currently no established community radio law in Panama. Legislation for radio and television is governed under Law Act No. 24, by which the public services of radio and television are regulated and other provisions are dictated. Although the telecommunications law provides two types of radio licenses, Type A for commercial stations and Type B for educational and culturally related stations, this law does not include community radio. In 2016, Cultural Survival, in partnership with AMARC and other Indigenous organizations, attempted to apply for a radio license. The application was rejected, with the possibility for resubmission in two years.

Voces Indigena, a movement formed by the Foundation of Promotion for Indigenous Knowledge and other Indigenous communities to strengthen the identity and recognition of Indigenous rights, intercultural inclusivity, and a democratic society, has been one of the leading organizations in securing legal radio frequencies. It is also the home of the Indigenous Community Communication Center. In May 2018, Voces Indigena held a training and networking opportunity for  Indigenous women to build their capacity in journalism, community radio, and knowledge of the youth justice system in Panama City. Guna, Embera, Wounaan, Buglé, Ngöbe, Naso, and Bribri women leaders attended the training.

The first part of the day was an orientation to the justice system in Panama and juvenile restorative justice presented by Alejandro Bonilla, Terre des Hommes Coordinator for the Indigenous Ancestry Justice Project. Ernelda Pitterson (Bribri) from Guabo de Yorkin territory in the province of Bocas del Toro, commented, “we want justice for our youth... we must revive our culture to revive our young people.” Arona Membache B (Embera) from Tierras Colectivos de Arimae in the province of Darien added, “ancestral justice builds a social, oral, and spiritual community. For this reason, we want to restore ancestral justice in our society.”

For the majority of participants, it was their first time attending a training. The women were challenged to overcome their fears of public speaking and were encouraged to speak in their Indigenous language. For Ebodia Cension (Buglé) from Comarca Ngöbe-Buglé in the province of Chiriqui, it was a powerful experience: “For the first time I felt visible and recognized as Buglé. Many people think Ngöbe-Buglé is one Tribe . . . even though we live in the comarca and dress similar, we speak another language and have our own traditional practices.” The second portion of the day was training in radio broadcasting where Jose Bacorizo (Embera) facilitated tips on how to communicate in a radio station, and also led vocal exercises. During the last portion of the day, participants role played being on air live, each sharing a statement of personal truth along with a summary of what the juvenile restorative justice meant to them, both in Spanish and their Indigenous language. The results were inspiring.

“My urgency is to support the Bribri community in rescuing the culture of my grandparents and grandmothers. It is a culture we cannot forget or let disappear. We have to recover the roots of our valuable identity, the identity that [sic] we have as Indigenous Peoples,” said Emilsa Sandra Cerrud Morales (Bribri) from Guabo de Yorkin territory. “Today’s youth have forgotten their culture and customs of our people. Restorative juvenile justice, as well as Indigenous justice, have similar objectives in reparation, rehabilitation, and recovery of youth, who are victims of legal and social conflicts. We can transform with care in valuing them for the benefit of future Indigenous Peoples and the country. Little by little, we can rescue the ones we are losing,” said Elisabeb Ester Jose Perez (Ngöbe) from Changuinola in the province of Bocas de Toro. “Our cultures and worldview are an inheritance of our iden-tity as individuals in this society. The way we govern and how we have lived has been sustainable for the environment in maintaining our values, which are our rights that we must keep. We all encompass the future generations. We must pre-serve it,” said Cunampio (Embera Piriati) from the collective lands of Alto Bayano in the district of Chepo, province of Darien.“I support the rights of Indigenous Peoples because we have many things that need support,” said Liseth Peña  (Wounaan) from the collective lands of Airmae in the province of Darien. Peña is one of the handful of remaining fluent Wounaan speakers. As part of the comarca Emberá-Wounaan, the Wounaan hold strong political autonomy; however, an increasing settlement of non-Indigenous people are harming the ecosystem and jeopardizing their way of living.

Despite billions of dollars being poured into the creation of protected areas, the projects frequently are found to contribute to human rights abuses, conflict, and a loss of cultural diversity.

“I support Indigenous Peoples’ rights because it is very important for the comarca. Our language and our culture is disappearing, which is everything to us. Little by little, we need to revive our identity again. Our rights unite each one of us so that one day the young people and children will have their own identity, the identity of Indigenous people,” said Betty Lida Archibol (Guna) from the Comarca Guna Yala in Panama City. Archibol was the youngest participant in the training and is a member of the Organizaciones de Mujeres Indígenas Unidas por la Biodiversidad de Panamá (OMIUBP), who are a Keepers of the Earth Fund grant partner.

The last part of the training was the plenary and group dialogue in creating a board of directors for the Women’s Network of Communication and Development for Indigenous People in Panama. The goal was for Indigenous women to become proactive in the field of communications. Raquel B. Cunampio, coordinator of the Indigenous Women Network for the Rights to Communication, facilitated the discussion.  Most of the participants were not familiar with the functionality of a board of directors or the legal process in securing a radio frequency, so a brief overview was given on the National Authority for Public Services and Telecommunication Law 24. By the end of the day, the selection of a Board was finalized, along with efforts in establishing a nonprofit organization to be able to apply for a frequency license.

The last part of the training was the plenary and group dialogue in creating a board of directors for the Women’s Network of Communication and Development for Indigenous People in Panama. The goal was for Indigenous women to become proactive in the field of communications. Raquel B. Cunampio, coordinator of the Indigenous Women Network for the Rights to Communication, facilitated the discussion. Most of the participants were not familiar with the functionality of a board of directors or the legal process in securing a radio frequency, so a brief overview was given on the National Authority for Public Services and Telecommunication Law 24. By the end of the day, the selection of a Board was finalized, along with efforts in establishing a nonprofit organization to be able to apply for a frequency license.