Life Out of Balance: Is It Too Late? 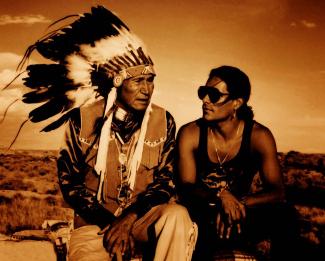 “People, can you hear your momma crying; Feel the warning taste what she’s saying; ‘People the hour is near; Do you know the game you’re playing; Will this be our fate; Is It Too Late?’”

— Lyrics from “Is It Too Late”

As news from the Arctic to the Amazon began to reveal latest acts of environmental genocide, I thought about how 527 years of Columbus through the era of Trump and Bolsonaro have taken their toll; how these last 5 years have become the hottest on record, with July the hottest month in global history. I thought about our people, water protectors and defenders of land and life at the forefront of a global crisis, being threatened, murdered, and incarcerated at alarming rates.

It’s been 96 years since our Indigenous leaders first reached out to the League of Nations, 29 years since my first music picture, “Is It Too Late,” screened at the UN General Assembly, and 27 years since the first global conference on the environment and sustainable development. Yet, on the precipice of a new decade, forces of nature are stronger, more frequent, and catastrophic. Fires are raging across Mother Earth, oceans are dying, the Arctic is melting, sea levels are rising, communities are flooding, rivers are rerouted and dammed up, the largest mass extinction of plants, medicine flowers, and animals since the loss of the dinosaurs is well underway, world hunger is on the rise, and war is endless. Have all the hard work, goodwill, and negotiations failed?

With UN member States like Brazil being complicit in setting the Amazon on fire, and President Trump’s intent on devastating the largest remaining temperate rainforest in the world, the Tongass National Forest in Alaska, and opening up the Arctic National Wildlife Refuge for oil and gas development, this seems to be the case, despite the warnings of our people and an environmental movement hundreds of years in the making.

While western attitudes towards Indigenous Peoples, both romantic and savage, can be traced back to Columbus, Chief Seattle’s words during an era of genocide, colonization, and domination, became the spirit of the modern environmental movement. “Humankind has not woven the web of life. We are but one thread within it. Whatever we do to the web, we do to ourselves.”

In 1948, Thomas Banyacya (Kykotsmovi Hopi), instructed by Hopi spiritual leaders, traveled to The Great House of Mica, the United Nations, to carry the Hopi message of peace and deliver warnings from prophecies. He told them, “Nature, the first people, and the spirit of our ancestors, are giving great warnings. If we human beings do not wake up to the warnings, the great purification will come to destroy this world—just as previous worlds were destroyed.”

Today, the modern environmental movement is global, multifaceted, and rooted in the resilience and activism of Indigenous Peoples. In the aftermath of the 1986 Chernobyl disaster in the former Soviet Union, the world’s worst nuclear disaster, I traveled to Japan on a Sacred Run for Land and Life with elders and youth, including Banyacya, Dennis Banks, the founder and leader of the Sacred Run, and my daughter Dakhˇóta, one-year-old at the time. We had just finished running across Turtle Island from Onondaga Nation territory in New York to the Ohlone territory in San Francisco. Every step of the way was a prayer, stopping only to deliver the warnings of our people. We visited and prayed with the Ainu, the Nipponzan-Myōhōji Buddhist Monks, and met with members of Japan’s imperial family, political leadership, and local citizens. I was asked by a young mother in Fukushima to write a song based on her letters to the Japanese government about the dangers of nuclear power and her concerns of an accident at the Fukushima Daiichi Nuclear Power Plant, and so I did.

In the winter of 1990, the Global Forum of Spiritual and Parliamentary Leaders invited 20 Indigenous Peoples from the 4 corners of the world to Moscow to deliver warnings and a message of hope. Onondaga Clan Mother Audrey Shenondoah gave a powerful keynote address, and “Is It Too Late,” prefaced by then-President Mikhail Gorbachev’s historic environmental message, was broadcast around the world from the Kremlin. That year, Earth Day went global, mobilizing 200 million people in 141 countries and paving the way for the first international conference on the environment, the UN Conference on Environment and Development, The Earth Summit, held in Rio de Janeiro, Brazil in June 1992.

The week prior to this historic conference, I traveled with Dakhˇóta, now four, to Kari-Oca, a village outside Rio, to participate and perform at spiritual and artistic events held during the Earth Summit. Dakhˇóta sang with me and with the International Children’s Choir. Hundreds of Indigenous Peoples from around the world gathered at the Kari-Oca conference. Together, we made a declaration of our intentions for the future. The Kari-Oca Declaration is a prayer that our ancestors and future generations will help us. “We, the Indigenous Peoples, walk to the future in the footprints of our ancestors... We maintain our inalienable rights to our lands and territories... To all our resources—above and below—and to our waters, we assert our ongoing responsibility to pass these on to future generations.”

Leading up to the Earth Summit, I worked with other Indigenous artists and leaders, including Oren Lyons, Faithkeeper of the Onondaga Nation, and Paiakan, a celebrated Kayapo leader who brought world awareness to the Altamira Gathering in 1989 that stopped the Brazilian government from building four dams that would have flooded the Amazon. Our work at UN headquarters in New York prior to the Earth Summit led to the inclusion of Indigenous Peoples’ rights in the United Nations Agenda 21 document. Chapter 26 is titled, “Recognizing and Strengthening the Role of Indigenous Peoples and Their Communities.” It states, “In view of the interrelationship between the natural environment and its sustainable development and the cultural, social, economic, and physical well being of Indigenous people, national and international efforts to implement environmentally sound and sustainable development should recognize, accommodate, promote, and strengthen the role of Indigenous people and their communities.” At the Earth Summit, Indigenous voices were silenced. After much debate, one Indigenous spokesperson was permitted to address the conference. Marcos Terena of the Brazilian Inter-Tribal Committee delivered a statement on behalf of Indigenous Peoples that once again gave warnings.

Just as my friend in Japan feared, Fukushima Daiichi Nuclear Power Plant did explode in 2011, spilling billions of becquerels of deadly radiation into the Pacific Ocean and converting her home into a toxic waste zone. As the aftermath of the disaster began to wash up on shores and beaches around the world, with the support of the Shakopee Mdewakanton Sioux Community, the Coeur d’Alene Tribe, Mille Lacs Band of Ojibwe, Red Lake Nation, Sac and Fox Nation, and San Manuel Band of Mission Indians, I wrote and directed the music picture, “Who’s Gonna Save You,” which premiered on South Africa Broadcasting Corporation during the UN Climate Change Conference (COP17) in Durban, South Africa.

There have been countless reports, local and global meetings, conferences, summits, and forums on the environment and climate change. Many pledges and accords have been made and still the world remains in peril—literally spinning out of balance. The Amazon rainforest is referred to as “the lungs of the world,” yet no real action is taken to protect the rainforest or the rights of Indigenous Peoples who care for it. Domestic and international laws are written, rewritten, amended, and disregarded to allow violent looting and polluting at the expense of future generations. This has been going on for centuries, beginning with the Doctrine of Discovery, 15th century Papal Bulls that gave Christian explorers the notion to claim our lands and resources for their Christian monarchs. Today, corporate control over UN member States has placed a chokehold on governments and instigated a war on nature. My sisters and brothers in the Amazon refer to those engaged in depleting the world’s natural resources as “termite people”—chewing up and eating everything without regard of the consequences, only to suffocate in their own waste.

As the biggest land grab for natural resources in history is happening right now, greenhouse emissions are dangerously escalating. It is going to take Indigenous wisdom and traditional and modern science to change this direction. This can only happen with the united voice of the people. If those living in “first world” countries wait until the climate crisis arrives on their doorstep, it will be too late. While the 197 countries’ pledge to limit global warming to below 2 degrees Celsius remains another broken promise, youth from around the world organized to do what governments have failed to. In September 2019, millions marched across the globe prior to what was billed as the most significant climate conference to date, the 2019 UN Climate Action Summit in New York City. While there was much talk about action, the world’s richest and biggest polluters did not make a climate pledge to be part of the solution and Indigenous voices were once again limited.

If the Trail of Broken Treaties is any indication, UN member States aligned with the U.S. will never honor the many agreements they made on climate change. What we are experiencing is life out of balance. Those who understand nature and natural law, who can still feel the heartbeat of our relations and their connection to land and life, will have a better chance of surviving as Mother Earth cleanses herself of the greed, violence, and pollution that is destroying our world. Crazy Horse said, “I see a time in seven generations when all the colors of mankind will gather under the sacred tree of life and the whole earth will become one circle again.”

Today, the seventh generation is calling for an Earth Revolution; an opportunity to create a better world, a sustainable and renewable world, a world that honors natural law and the rights of Mother Earth and all living things. The time for stereotypical beliefs about Indigenous Peoples has passed. We remain, more than 370 million. We are the Wisdom Keepers, the caretakers of Mother Earth. More than 80 percent of the world’s remaining biodiversity lives within our territories. Help us protect these sacred places, these precious ecosystems. Help us change this path of sorrow and usher in a time of healing. For what we do now, in this moment, will be humanity’s defining legacy.