#LANDBACK Is the Solution 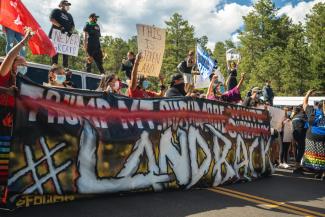 Demetrius Johnson (Diné) is a #LandBack Organizer at Rapid City, South Dakota-based nonprofit NDN Collective. Originally from Tółaní, Ganado, Arizona, Johnson began community organizing shortly after being elected President of Kiva Club around the disastrous Gold King Mine spill that affected his people in 2015. He is also a long-standing lead organizer for The Red Nation, a coalition of Native and non-Native activists, educators, students, and community organizers based in Albuquerque, New Mexico, advocating Native liberation. Johnson has been part of many campaigns advocating for the liberation of Indigenous, 2SLGBTQIA+, and working class people. Cultural Survival’s Indigenous Rights Radio Coordinator, Shaldon Ferris (Khoisan), recently spoke with Johnson about his work on NDN Collective’s #LandBack Campaign. 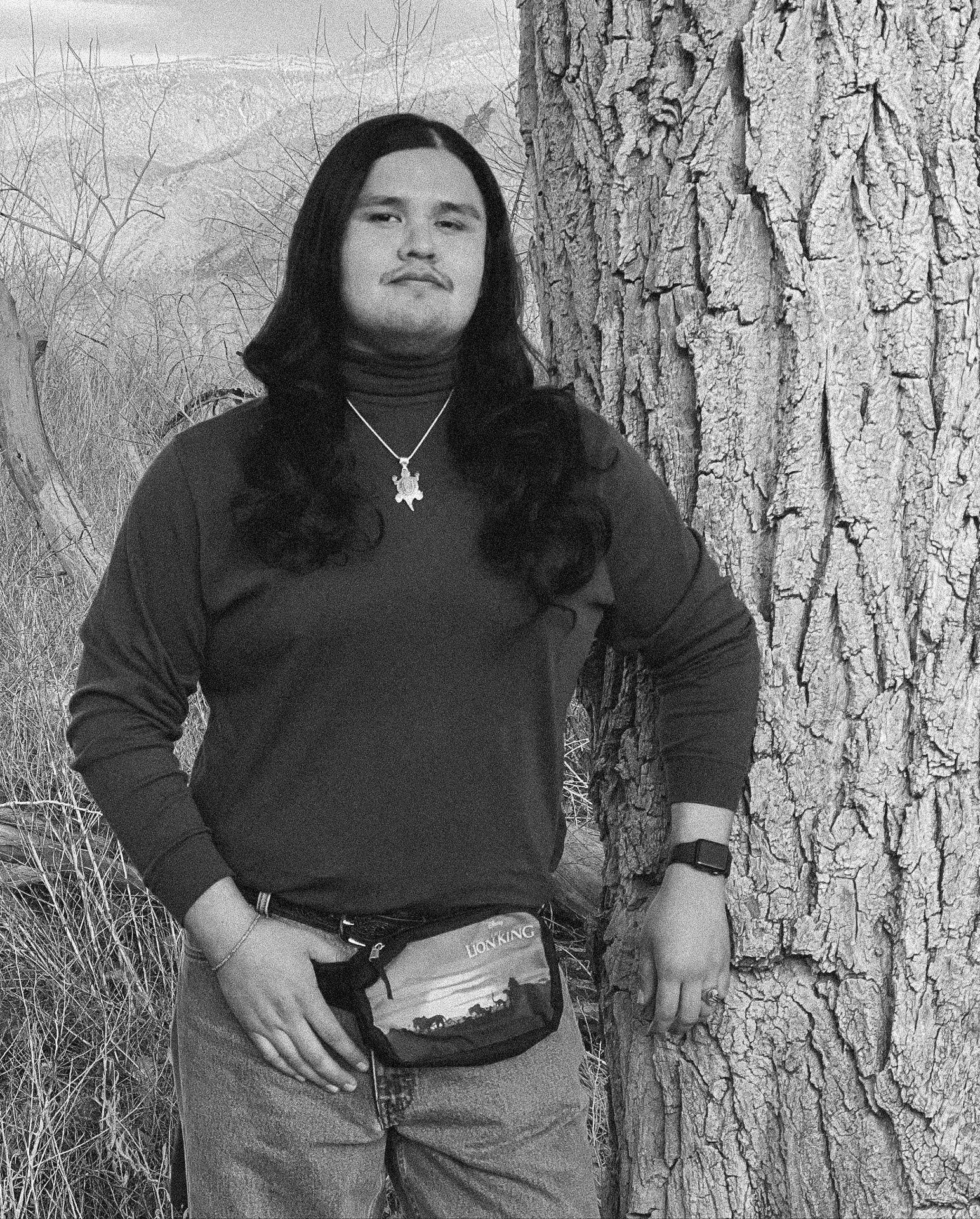 Cultural Survival: Please tell us about your work at NDN Collective.

Demetrius Johnson: I work for the #LandBack campaign. There’s currently three of us within the #LandBack campaign: me; Nadya Tannous, a Palestinian woman and the other organizer; and our Director, Krystal Two Bulls (Northern Cheyenne and Oglala Lakota). The #LandBack campaign is one of the many campaigns within NDN Collective, a Native-led nonprofit organization in the United States. The work branches from our philanthropic arm, which gives millions of dollars back into our communities: 87 percent of our funding that we receive from donors is brand new money, which means that the money that we receive isn’t being taken from money other Native organizations receive. This is all brand new money that’s getting funneled into Native communities and organizations. We also have our actions arm, which is where the #LandBack campaign lives, along with the climate justice campaign, education equity, and racial equity. Within the philanthropic arm we have our lending arm for Tribes that typically can’t get loans from banks or federal funds or for big projects they need to do on their reservations, for example, renewable energy or housing projects or agriculture. That’s where NDN Collective comes in, so that Tribes don’t have to lean on white-led nonprofits.

NDN Collective is really unique. It has only been around for four years, but it’s very powerful. NDN Collective serves as a place where Indigenous people doing the work can actually work on defending the land, protecting their communities, and creating solutions without having to worry so much about the expenses, because NDN Collective is able to fund those projects and initiatives through our many grant opportunities and sponsorships. 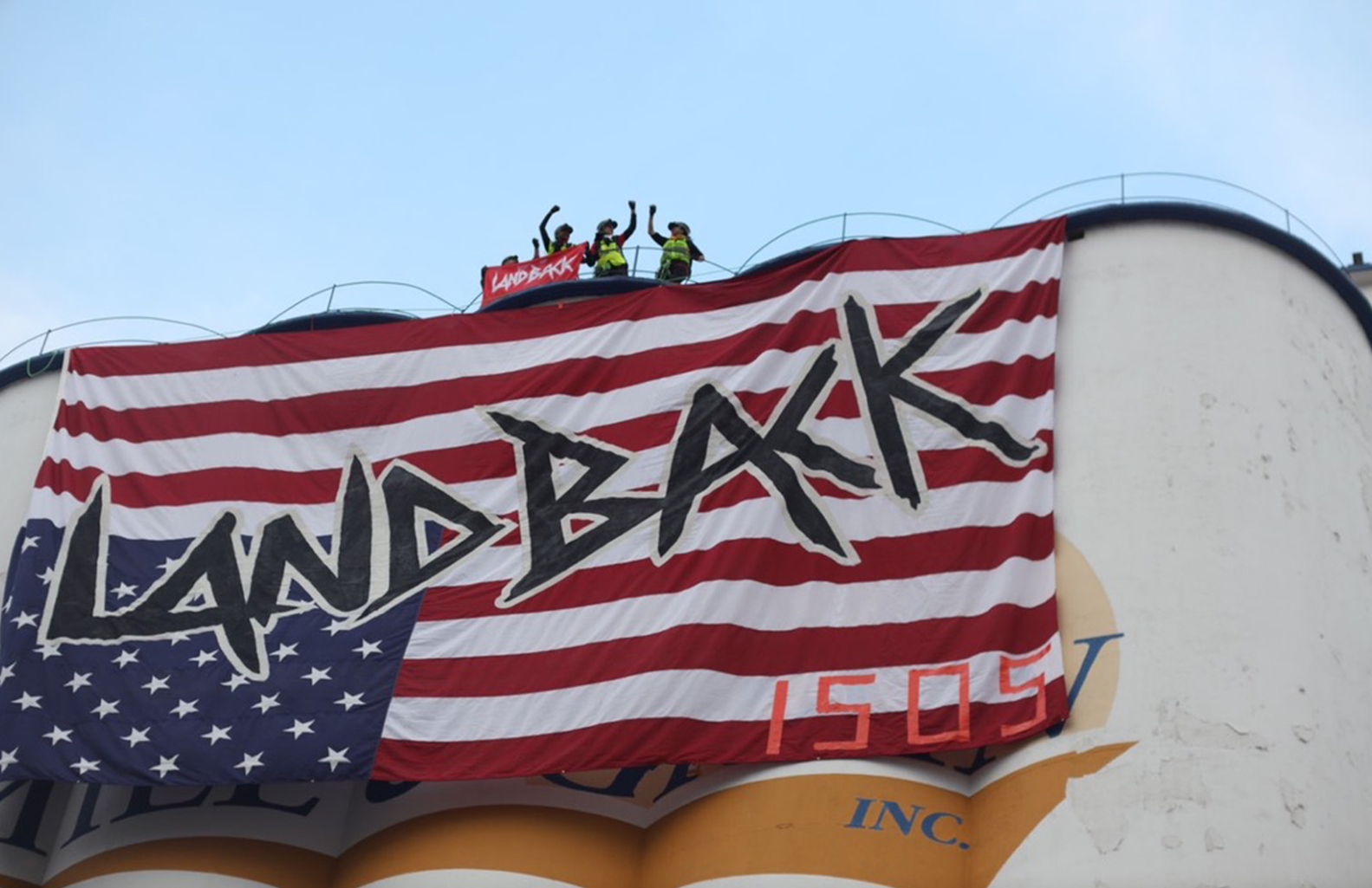 CS: What is the #LandBack campaign?

DJ: The #LandBack campaign is only two years old, but the movement for #LandBack began since colonizers came to this place. We’re only continuing the work that our ancestors have done before us. Our campaign’s cornerstone work on He Sapa (the Black Hills) starts with the Fort Laramie Treaty. The Black Hills are the Lakota Peoples’ sacred site, and they have every right to protect that place. Donald Trump came to visit on July 4, 2020, Independence Day here in the United States. Many Native people who call that place home were arrested, tear gassed, or pepper sprayed. Even our [President and CEO] Nick Tilsen (Oglala Lakota), and Krystal were arrested. That’s actually where the #LandBack campaign was born. The #LandBack campaign is reclaiming the Black Hills because that’s the heart of everything that is. That is their emergence point and sacred place. By returning the land, it allows us to return to our language, our culture, our spirituality, our kinship systems . . . everything.

There’s a lot of momentum for the term “land back.” I was told by First Nations people in Canada that it was an auntie that started using land back when she was talking to the Canadian government [in the late ‘90s], and First Nations young people [later] popularized the term through social media. We don’t claim to own that phrase, but we do work around that framing. When doing this work we don’t just do it without guidance, individually. We come back to our communities, we talk with people, Elders, youth, to make sure that we’re coming correct to this work.

CS: What are some of the strategies that you have used? What successes have you had?

DJ: I started working for this campaign just a little bit over a year ago. My coworker Nadya, the other #LandBack organizer, got hired the week of July 4. We went to Rapid City, which is where the Black Hills are, where Mount Rushmore is, and [where] we did the action. Nadya and Krystal were two of the four climbers that ended up on the grain silo in the middle of Rapid City. On the 4th of July, everyone’s wanting to see fireworks. There are statues of every president of the United States. People come in from all over the country just to be there. And we climb up this grain silo and they do the #LandBack flag drop. Nadya and Krystal were a part of that in a very powerful moment and that galvanized a lot of people. It also let our people know we are here continuing the work of resistance and we want our land back. That was also in conjunction with raising awareness on the children that were sent to boarding schools during the boarding school era and finding all their bodies around those schools. It was very powerful. We definitely blew the candles out on their 4th of July.

Since then, we launched #LandBack University, which is our online platform for people learning about the work on the front lines, people doing actual #LandBack work and expanding that conversation. The first session that we ever did was on cultural burning, how Native people manage fire and actually use fire to prevent wildfires. Native people had the knowledge back then to understand there are certain things that you had to control though cultural burning. We have done modules on Black Indigeneity, contemporary land struggles in Hawai’i and Palestine, and now one on militarism and imperialism in our communities.

We did a billboard campaign all across the country. We brought in a bunch of Native artists and they designed billboards and we put them all over Turtle Island. You can see them on #Landback Art on Instagram. There’s also an amazing documentary that was recently released called “Lakota Nation vs. The United States.” Krystal was featured in that. It talks about the Black Hills and the struggle to reclaim that land. Now we’re working on a database for people to access, showing #LandBack victories in the context of Turtle Island from the last 10 years. And we’re hoping to expand. It’s up to 2010 now, but we are going back even further. I feel like it’s always talked about how much land was stolen from us, but how much land are we reclaiming? We’re hoping that it will be released at the end of this year.

CS: How can people get involved in the #LandBack movement?

DJ: Talk with your communities, your people, Elders, youth— the community you’re trying to get land back for. That should always be the first priority. That should be who you’re accountable to. We’re not the leaders of this movement. The movement is with the people, and we are a part of the movement. Indigenous Peoples are the leaders of this movement. All we do is just put a framework around what land back is. So if you want to get involved in getting land back to your people, talk with your people first.