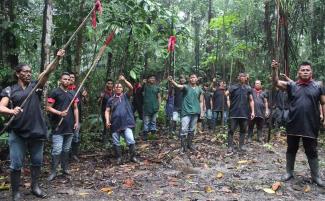 The A’i Cofán community of Dureno is located on the Aguarico River in the province of Sucumbios in the northeastern part of the Ecuadorian Amazon. For thousands of years, the A’i Cofán people have tended this territory, living in balance with their environment. During the last several decades this region has suffered oil exploitation and currently faces a threat from the State oil company, Petroecuador, a situation that is generating an internal division among community members. “We have always resisted oil exploitation,” says Albeiro Mendúa (A’i Cofán), Vice President of the Cofán community and Director of the Kuankuan Foundation, a community organization dedicated to the well being of Amazonian communities.

Petroecuador, via the Taiwanese company CSBC, is seeking to dig 30 oil wells through three platforms within the Cofán territory, which is home to one of the only remaining areas of dense and intact forest in the region. Dureno is a community of about 750 inhabitants who hold title to 9,571 hectares (23,650 acres) of primary forest. Within it is conservation territory managed by the community through an agreement signed with the federal program Socio Bosque, which seeks to conserve native ecosystems via collaborations with Indigenous and campesino communities.

Despite the collective rights that the A’i Cofán, as an Indigenous Peoples, have to their territory, the Environment Ministry has granted permits to the oil drilling project without consulting them or obtaining their Free, Prior and Informed Consent. To confront this violation of their rights, the community’s Indigenous Guard has organized more than 130 people in resistance. This group of defenders includes women, men, youth, and even children who accompany their parents up to two hours on foot to reach the resistance camp. Women are prominent participants in the decision making process for this action.

In 2021, when Petroecuador attempted to begin its project, the defenders removed machinery and subsequently returned it publicly along with a demand to stop all work. This year, the company returned with the intention of opening 12 kilometers of road and more than 4.5 square kilometers of land around each platform to drill the wells. The defenders have managed to put an end to the road construction that was already underway, removing machinery and preventing workers from entering. Petroecuador has now removed its own machinery and says that it wants to establish a dialogue with the community. However, Mendúa says there is nothing to dialogue about: “We have said no. We do not want to reach an agreement. The only agreement we are asking for is that they leave for good and that they leave us in peace.”

The State is obligated to conduct a consultation with the community according to its international commitments in accordance with its ratification of ILO Convention 169 and its vote in favor of the UN Declaration on the Rights of Indigenous Peoples. However, experience has taught the community that if a company consults, they are going to extract oil, and they do not want to legitimize this process. Ecuador’s constitution requires consultation, but until a 2022 ruling by the Constitutional Court, it has not required that the consulted community consent to the implementation of a project. Waorani leader Nemonte Nenquimo calls the consultation process a trap.

“If the community says [yes or no], it does not matter because the consultation is not binding; the consultation is merely an informative act,” says Lina Maria Espinosa, Senior Attorney at Amazon Frontlines. There are recent legal precedents of courts rejecting mining and oil concessions in situations where there has been no consent. In March 2022, the Constitutional Court of Ecuador released its decision recognizing the right of Indigenous Peoples to consent to development projects. Complicating the Dureno community’s case is the fact that the State has purposefully conflated their struggle against the oil project with that of another Cofán community defending its territory against mining companies, claiming that the former is in the Constitutional Court of Ecuador and that a decision is pending regarding the Dureno community’s struggle, but this is not the case. 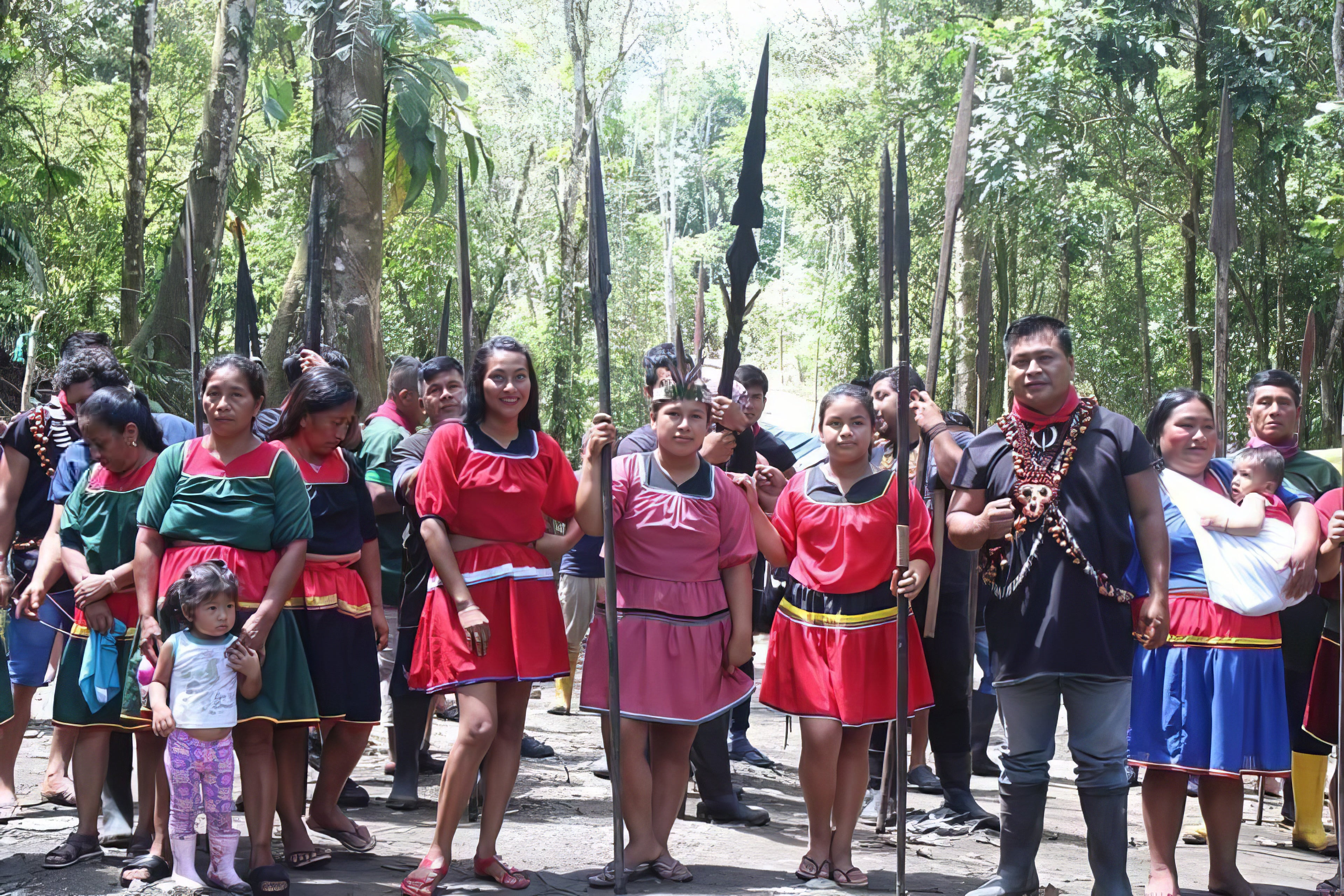 Protecting the forest is an intergenerational effort with women and youth at the forefront.

The A’i Cofán Dureno community’s right to Free, Prior and Informed Consent is clearly not being fulfilled, yet it is fundamental to securing their remaining ancestral territories. Mendúa says, “Most of the Elders have said that this is the only territory we still have. In the past, they used to move freely in the Amazon and they thought that all the territory was ours, [that] it was free.” Now the Elders say that they feel imprisoned in a reduced territory. There is less space for fishing, cultivation, and food gathering. “For us, the land is life. It’s life, and for the Western world, there is nothing [here]. For us, there are invisible beings with whom we have coexisted, especially the animals. Shamans drink Ayahuasca and thus get permission to hunt animals to eat them. The land is where you get everything you need,” he says.

Prior to colonization, the A’i Cofán numbered 30,000 people. With diseases and other forms of violence that colonization has brought, the current population is a fraction of what it was, currently around 1,200. The A’i Cofán Peoples and their culture are strongly linked to their territory, and, as Mendúa says, “For them to exploit the oil issue now would mean extinguishing our culture. Our resistance itself is to defend.” Not all of the community agrees, however. Many young people see oil exploitation as an economic opportunity for the community, which is partly due to what Mendúa characterizes as manipulation and bribes by the oil company. This has resulted in a situation in which the State is able to define the pro-exploitation sector as the ‘legitimate’ representatives of the community, while those who oppose it are accused of being illegal or terrorists. Mendúa says they are actively seeking out other organizations and communities that have experienced something similar to learn from good practices that have helped them overcome community divisions.

The community was not always divided in conflict. In the past, they have lived off the energy of their ancestral and community practices, as well as their relationships with tourism. They practice traditional spirituality and rely on traditional medicine. During the COVID-19 pandemic, they have used this medicine to care for their people. The community is located among lagoons and rivers and amidst great biodiversity. In January, “the spiritual renewal” or “the blossoming” will be celebrated with animals, offerings, and ceremonies, such as the Ceremony of the Chonta, a harvest ritual for the chonta plant.

The resistance against the oil extraction has been ongoing since June 2022. Many families have had to leave the camp since the start of the school year and the camp is currently dominated by young people, many of whom are taking turns missing school to carry on the resistance. The Indigenous Guard remains committed to their goal of not allowing any wells to start production. Mendúa emphasizes the community’s great need for international solidarity at this time of struggle: “We invite all the organizations that can join us because our struggle is not only to conserve the forest. The climate crisis is affecting us and it is evident what is happening worldwide. To conserve the forest is to conserve for the common good of all people.”

In 2022, to protect their territory and the environment, the A’i Cofan community received a grant from the Keepers of the Earth Fund, an Indigenous-led fund at Cultural Survival designed to support Indigenous Peoples’ advocacy and community development projects globally. Since 2017, we have supported 238 projects in 38 countries through small grants and technical assistance, totaling $1,070,602. The funds go directly to Indigenous communities, collectives, organizations, and traditional governments to support projects designed by the communities and in accordance with their Indigenous values. Cultural Survival uses a rights-based approach in our grantmaking strategies to support grassroots Indigenous solutions through the equitable distribution of resources to Indigenous communities.