From La Selva Amazónica to the Concrete Jungle 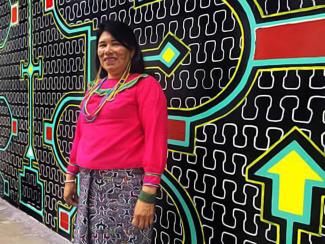 A Shipiba artist and her Madres Artesanas collective transplant the dreams of their ancestors.

Lima has long functioned as ground zero for a centuries-old process of “de-Indigenizing” Peru’s population, 83 percent of which are of Andean Indian descent when including those of mixed-race. Bloodlines mingle, languages are forgotten, and traditional practices fall away in the face of a persistent Eurocentrism that compels wave after wave of Indigenous Peruvians to choose between economic and cultural survival. In the neighborhood of Cantagallo, along the Rimac River near the city center, however, is a community founded by a group of displaced Shipibo-Konibo from the Amazon region of Ucayali. There, resident artist Olinda Silvano is at the vanguard of an aesthetic movement asserting an Indigenous identity that refuses to fade into urbanized obscurity.

Under the tutelage of her grandmother, Silvano learned to weave textiles featuring the bold, geometric and maze-like kené designs typical of Shipibo-Konibo art forms. After relocating to Lima to make a new life in the big city, she continued this tradition along with a collective referred to as Las Madres Artesanas (the Artisan Mothers). A chance encounter on the street with a group of graffiti muralistas inspired the weaver to transform Shipibo designs into massive works of public art, giving her Indigenous people and their culture a visibility in Peru’s capital as never before. 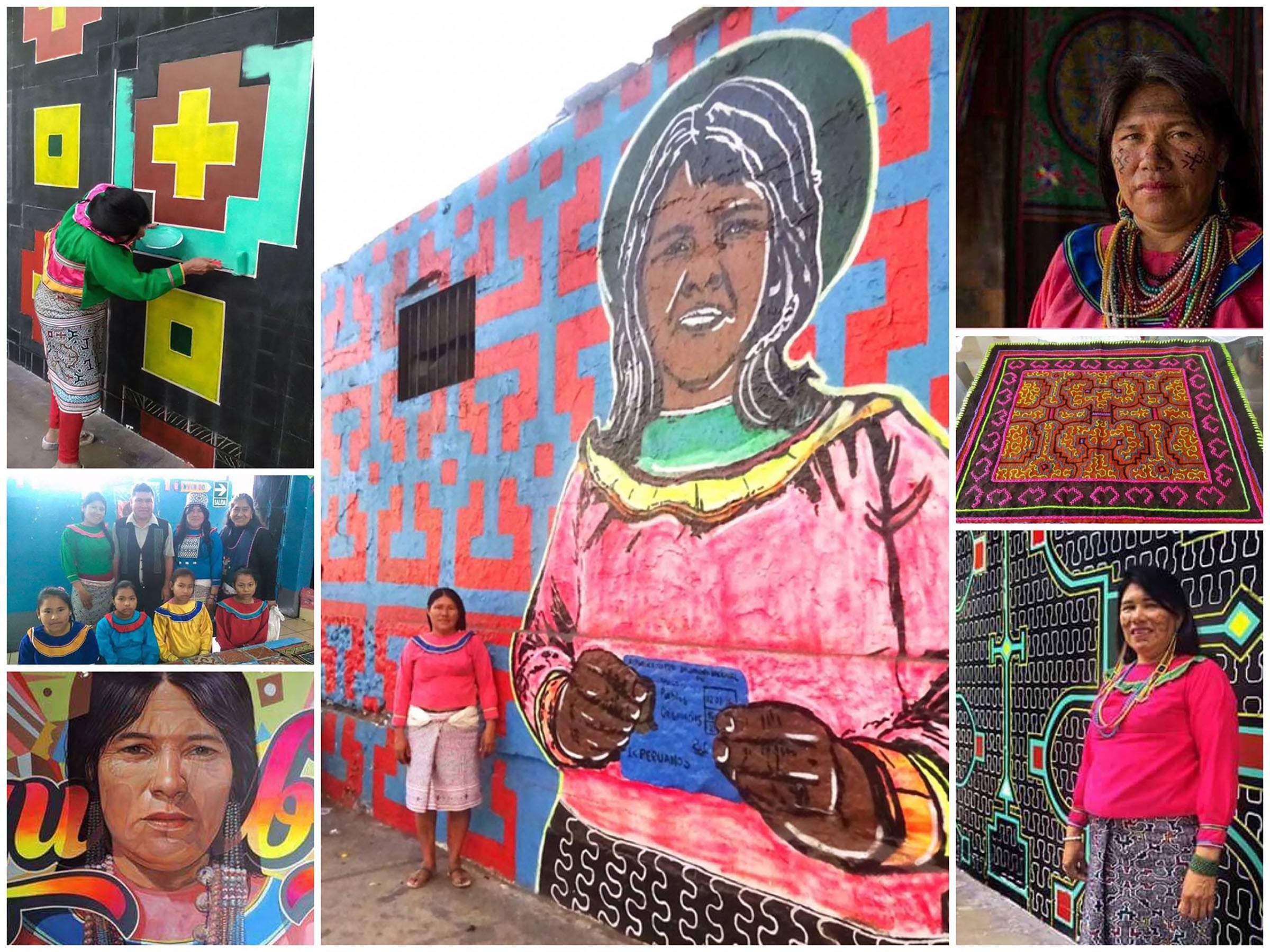 Cristina Verán: How would you describe your surroundings, the conditions you grew up in back in the Amazon?
Olinda Silvano: We didn’t have material things; not clothing, not even soap. When I started learning these designs, at first I did not even have any paper on which to record them. I knew from a young age that I wanted to share my art, our Shipibo designs with the world beyond our village, but we just didn’t have the resources needed to make that happen from within our community. And so I decided that when I grow up, I’ll leave.

CV: When you came to Lima, how did it feel to be in such a crowded place, where Mestizos and Andinos (Indigenous Peoples from the mountain regions) are the overwhelming majority?
Silvano: So many things happened to me when I arrived, a lot of humiliation, a lot of discrimination. The people have a lot of wrong ideas about Shipibos, thinking we are beggars, that we will offer our bodies to anyone for money. Eventually, I began to see that I could use my art as a way to educate them about the richness of our culture.

CV: How do you think your people have been able to maintain a cohesive community with its cultural links and practices in tact?
Silvano: Cantagallo is the continuation of our living culture, a community that carries its identity proudly, where being Shipibo-Konibo is not forgotten. One can find most anything pertaining to our cultural practices; we have midwives, traditional healers, even a group dedicated to the spirituality around ayahuasca.

CV: When most people think of Peruvian textiles, they imagine the designs typical of the Andes from Quechua and Aymara communities, usually patterned along horizontal straight lines. Shipibo-Konibo kené is aesthetically distinct from that. What kind of an impression did it make when it started to become more commonly seen around Lima?
Silvano: Well, when we would go out to sell our kené, people would ask us, “What does this mean? What significance do these designs have?” Some were quite rude, and would say dismissively, “Your art is ugly, it has no meaning,” or that kené is artistically insignificant. They demanded we sell our items very cheaply or they would refuse to buy them.

I became more resolved and determined that someday the people will truly come to know this kené of ours, to understand its value, and they will love it. And then, too, they will be willing to pay for them what they are worth.

CV: How did you begin to conceptualize presenting the art of kené in mural form?
Silvano: I must credit the late Professor César Ramos, an anthropologist who believed in this mission. He introduced me to many people involved in art, and so I was able to learn how to render the designs of my weaving with a paint brush.

Soon after, people in that world began to call me and invite me here and there to paint. I started participating, with a few collaborators, in public art competitions. This insured that we would have a prominent space for our art—art that would speak for us as Shipibo-Konibo people. It announced to Lima: “We have arrived!”

CV: You’re not only an artist practitioner and educator, you’ve also become a recognized leader in your community and beyond. What expectations do you have for yourself in that role?
Silvano: I’m currently president of the civil society organization AYLLU, which represents the women of Peru’s Amazon and Andes regions. It is not easy to be a leader for everyone, especially as a woman. My father told me, “If you have to work, it must be work that benefits not just yourself but the good of the community.”

All the mothers in our community… there are single mothers, abandoned mothers, they need to feel supported, and this is also why I am also an educator, to teach our traditional textile weaving so that they can earn a better living. I also educate them about our rights under [ILO 169] so that we may exercise and protect them. I am very happy for the support in this of Congresswoman Maria Elena Foronda Farro, who represents the Amazon region.

CV: Where else do you teach now?
Silvano: I give workshops at Colegio Shipibo school for our own Indigenous children, and I also teach some courses with a more intercultural focus, for the larger community—including at La Católica and San Marcos Universities as well as UNICEF. I want the rest of Peru to know more about our Shipibo art—not only the work and materials required to create it, but also the cosmovision at the center of it all.

CV: Tell us about a few of your favorite public art projects so far this year.
Silvano: Well, we just finished an installation for the popular Kennedy Park in the district of Miraflores: a large-scale rendering of a typical Shipibo pottery jar adorned with our kené designs. Earlier this year I, along with my fellow artists Wilma Maynas and Silvia Ricopa [Alejandra Ballón, a Peruvian academic, is also part of their group], was commissioned to paint six of the massive concrete columns that support Lima’s elevated train lines. We even brought our children out to help us in the process.

CV: You’ve also become a kind of cultural ambassador, helping to share the art of kené not only beyond the Amazon but beyond Peru’s borders as well. Please share an experience of that.
Silvano: I was recently in Mexico City to give a public presentation and workshops at the prestigious Museo de Antropologia de Mexico on how we make our style of Amazonian textiles representing our collective, Las Madres Artesanas de Cantagallo. [I was] joined by designers Anabel de la Cruz and Fátima Quispe and fellow artisan Laura Sánchez. I actually gave a lesson to the Peruvian Ambassador at the opening event!

CV: What do you anticipate for the future of your community, given all the challenges it has endured since it was devastated by a massive fire last year?
Silvano: It’s true, we lost nearly everything in the fire; so many of our homes, and of course a great deal of our creative products. It forced us to start our lives in Lima from scratch. I don’t know for sure what will come next, but, you know… estamos en la lucha. We continue in our struggle, and will keep making art, confident that Cantagallo shall be reborn from the ashes.


—Cristina Verán is an international Indigenous Peoples’ issues specialist, research consultant, strategist, and multimedia producer. Her work focuses at the intersections of human rights, political engagement, the arts, and community development. She is a longtime United Nations correspondent and was a founding member of the UN Indigenous Media Network.

Visitors to Lima can see the the murals of Olinda Silvano and the Madres Artesanas (many of which are in areas otherwise difficult for outsiders to access) through a private street art tour by Tailored Tours Peru: tailoredtoursperu.com