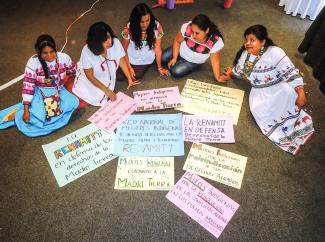 The Keepers of the Earth Fund provides small grants designed to support Indigenous Peoples’ community advocacy and development projects. Since 2007, the Fund has provided nearly $2.5 million in grants and technical assistance to over 350 Indigenous-led projects in 64 countries around the world. Cultural Survival announced two calls for proposals this year. In July, the call for proposals on Free, Prior and Informed Consent (FPIC) and self-governance funded 14 inspiring projects totaling $68,112. The second call for community development projects will fund an additional 10-12 project in the coming months. We are pleased to highlight a few of the projects that have a specific focus on Indigenous women:

Organización de Mujeres Indígenas Unidas por la Biodiversidad de Panamá (OMIUBP) (Panama)
Keepers of the Earth Fund supports OMIUBP’s project, “Strengthening the governance system of the Kuna and Embera Indigenous Peoples through the Law of Consultation and Free, Prior and Informed Consent in Panama.” The group will carry out two workshops with Kuna and Embera authorities and Indigenous women on the 2016 law passed in Panama, titled the Law of Consultation and Free, Prior Informed Consent, which was passed without consultation or consent of Indigenous communities. The workshops will guide the traditional leaders in learning about the content of the law and sharing their opinions about it, as well as assist them in analyzing implications for implementation. The workshops will also examine the international framework for FPIC and discuss and cases where Indigenous Peoples have succeeded in its implementation internationally.

Red Nacional de Mujeres Indígenas: Tejiendo Derechos por la Madre Tierra y Territorio (RENAMITT) (Mexico)
RENAMITT is a network of Indigenous women from across Mexico who work to defend Mother Earth and Indigenous territory. Their project includes two workshops to develop strategic plans on the implementation of a consultation policy in Mexico that will document how consultation is currently taking place in the country, specifically regarding consultation with Indigenous women, and make a comparative analysis to successful consultations in other regions. Based on their findings, the group will produce a series of radio programs in three Indigenous languages (Wixarika, Odami, Nahuatl) covering FPIC for broadcast via community radio in the areas where consultations are currently being implemented: Jalisco, Chihuahua, Guerrero, and Morelos. The women say, “Because of our historical continuity, Indigenous women must be included in decisions regarding the use of our lands and territories.”

Red Regional de Mujeres Siuamej Tayolchikauanij (Mexico)
The Regional Network of Women, Siuamej Tayolchikauanij, is a network of Indigenous and campesino women that defends their lands and recuperates traditional food production methods. Keepers of the Earth Fund support their project titled, Mujeres Defensoras En Red: Un Enfoque De Equidad En La Defensa Del Territorio. Through a series of workshops, they will share the successful example of the community Cuetzalan del Progreso, whose strong self-governance structure and demands for consultation has successfully pushed back against transnational mining, hydroelectric, and other unwanted projects on their lands. The women’s network will share this experience, while adding to it a focus on gender equality within self-governance structures that has been lacking. They will highlight the positive role that Indigenous women play in defending their lands even from their own backyards, within their families, and within themselves.

To learn more about the Keepers of the Earth Fund, visit: www.cs.org/koef.