Keeper of the Knowledge: Interview with Cultural Survival Board Member Che Philip Wilson 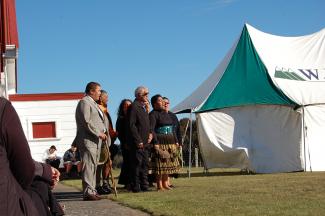 Our series spotlighting the work of our board members continues with newly elected board member Che Philip Wilson (Ngāti Rangi from the North Island of Aotearoa-New Zealand). He was the chair of his tribe from 2008–2011, when he stepped down to become the chief executive. Wilson is also on the boards
of several tribal associations and philanthropic trusts. He and his wife own a local accounting firm where his wife is the managing director.

Che Wilson is the youngest of nine children and a direct descendent of Ngāti Rangi, one of the tribes associated with the Whanganui confederation.
Raised in a small town of about 1,000 people at the foot of Mount Ruapehu, Wilson recalls that he learned to speak Māori around the age of 10. While other family members spoke the language, Wilson’s parents had made the decision to speak only English to their children in response to trauma suffered in their childhood and the pressures of colonization. “Mum was beaten at school for speaking Māori and beaten at home for speaking English,” Wilson says.
“Dad’s family had to learn the English way.”

Wilson attributes his cultural education to the maternal side of his family. “Mum was a rebel in her family and it’s actually been my mother’s side that has influenced my learning of the culture… mom’s sister ended up taking me under her wing and from the age of 10 I started to learn. Now I’m one of the key holders of knowledge for our whole confederation, even though I’m only 36.” Wilson remembers accompanying his aunt to national and regional tribal events until she died, when he was 16. “This actually opened the door for me. After she passed away, my two uncles and grand-aunt took over and the different knowledge they had was passed on [to me] right up until two years ago, in October 2010. These were my last key mentors. My four mentors were equivalent to, I suppose, the key keepers of the knowledge.”

Wilson also credits his parents for instilling in him strong values, including what he calls “spiritual protection.” “They gave us the tools from the age that we could describe our dreams. They gave us the tools to look after ourselves,” he says. “Mum and dad were also very strong in having a good work ethic and making the most of western education. Some of my family was teased as being the ‘white folk’ for making the most of western education, having non-Ma - ori friends, going to non-Māori events. I’m really appreciative even though we were teased because it’s helped us all mingle and mix in both worlds with ease.”

Independent at a young age, Wilson left home when he was 17 and moved to Wellington to study law, politics, and Māori. He spent a few years in London working on policy and community development and became the chair of the London Māori club. During this time he became connected to the British Museum. His tribal knowledge led him to several advisory positions, which ultimately revealed his true passion: cultural revitalization through the linking of poetry of the
landscape to the poetry of language. He has curated a couple of exhibitions that highlight the importance of storytelling in environmental protection. “It’s not just ‘once upon a time;’ it’s a way of maintaining the oral traditions and then linking those stories to a culture’s observation of their world,” he explains.

Currently Wilson is CEO of Ngāti Rangi, which is based inside the Tongariro National Park. Tongariro is the oldest national park in New Zealand, fourth oldest in the world, and a UNESCO natural and cultural heritage site. The park is managed by a government-appointed board where individuals are nominated.

“Sometimes we [Ngāti Rangi] get a position, sometimes we don’t get a position,” he says. “It’s politics. But, things will change. We have to go through our
own training program over the next two decades to ensure that we have those that are skilled to represent us and to maintain our values while being mindful of the various responsibilities that may be associated with legislation.

“The key thing I’m doing at the moment is to work with the government to ensure that [our]cultural heritage status is realized. Our government’s done a great job of lying to the UN about the cultural heritage status and the involvement of us as Indigenous people working the management and governance of the park. Fortunately we’ve just had a treaty of Waitangi tribunal prepublication report. [The report states] that the legal status of the park should be changed [to] where it’s given its own legislation and realized as its own legal entity, [and] that governance and management should be [handled jointly] with the local Indigenous peoples.

“It’s going to be a huge challenge for New Zealand because it’s been seen as the iconic national park, which has been controlled by the government for 125 years now. For us it’s about us maintaining our relationship with our relatives while ensuring that the crown doesn’t play us off, that New Zealand isn’t encouraged to be fearful of ‘what the natives are up to.’

The report is only a recommendation at this stage, but Wilson is confident that Tongariro will achieve the status of the Whanganui River (recently granted personhood status, see CSQ article goo.gl/P7nCD). “They’re now recommending that our mountains be given the same status. It’s exciting times! If we collectively have the courage to work it out, I’m confident that so long as we don’t use fear to engender racism, we can get there. I’m sure a lot of people
will see me as being too idealistic, but if you have strong leadership and you have the will to do what is right, I’m confident that we can get to a good place. It has to be a living document that needs to be reviewed, but we’ll get there.”

Wilson’s ambitions for the future of his tribe are bigger than the mountains he is striving to protect. He wants to see his people as major players on the global stage. “We need to enter into commerce at the same speed that our ancestors did in the 1810s. From the 1810s to about 1855, Māori controlled commerce in the South Pacific. Even though you had the English, French, Russians, the Americans, and some Dutch, we controlled commerce for that 45-year period, and we
have to get ourselves back to that place again.”

As to how this can be achieved? “We have to be multilingual, so that not only are we doing Pan-Pacific [business] with various countries and companies, but also global commerce. Sometimes you have to play a certain western game, but [you also] need to maintain your beliefs and values because it’s very easy to be lured by the glitter and tinsel. Our vision is that we continue to vibrantly exist for 1,000 years, so [this] is just one step in that 1,000-year journey.”