Justice for All: An interview with Grand Chief Edward John 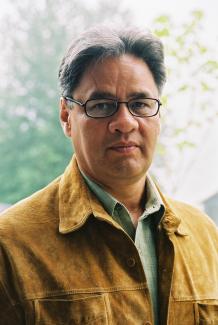 In our series spotlighting the work of our Board members, Cultural Survival is honored that Grand Chief Edward John (Akile Ch’oh), chair of UN Permanent forum on indigenous issues,
took time out of his schedule to speak with Cultural Survival Quarterly about his background and current work.

"I was born and raised in a fairly remote part of Western Canada in British Columbia in the territory of my peoples, in a community where the only language spoken was Dakelh, or Déné, of the Athapaskan language family. Our families and communities were heavily dependent on the land for food and for livelihood. It was a strong connection to our history, culture, values, and the land.”

Tl’azt’en Nation, “People by the edge of the bay,” is a First Nations community in north central British Columbia, Canada. They call themselves Dakelh (“We travel by water”), though Europeans popularized the name “Carriers.” The population of the Tl’azt’en Nation today is around 1,300. Of these, approximately 800 live in one of the main communities of Tache, Binche and Dzitl’ainli, and K’uzche. Tl’azt’en people still live off the land, hunting for moose, deer, bear, caribou, and mountain goats. They still set nets for salmon, white fish, trout, kokanee, spring salmon, and Lingcod, and still go to campgrounds in the summer to gather food for winter storage, much like their ancestors.

Grand Chief Edward John’s proud heritage and upbringing have made him the man he is today, a prominent First Nations political leader and Indigenous rights lawyer in Canada. For his service, he was awarded the title of Grand Chief of Tl’azt’en Nation. He helped to create the First Nations Summit, the organization representing the British Columbia First Nations involved in treaty negotiations with Canada and British Columbia. For over 30 years, he has been a tireless advocate for Indigenous rights. In January 2011, John began a three-year term as the North American Representative to the United Nations Permanent Forum on Indigenous Issues, and in 2012 he was elected Chair. Cultural Survival has the great honor to have Grand Chief John on its board of directors.

“The essence of what I bring forward to advocate for Indigenous Peoples is the historic and cultural connection to our teachings, to everything we see around us that is interdependent,” John says.

Killing the Indian Inside the Child
The seeds of John’s resistance were sown early on when John was subjected to mandatory residential schooling. As he tells it: “When I was a child the only schools available to us were the Indian residential schools, located far away from our communities. As 4-, 5-, and 6-year-old children we were bused away every year in September to these schools. We didn’t practice any of our cultural traditions; instead [we] were indoctrinated into anything but our own ways. We were literally there for 10 months of the year. As children, we didn’t realize the schools were instruments of the state operated by church groups, the purpose of which was to ‘educate’ us and ‘civilize’ us...[the] purpose identified [in] a state document was to ‘kill the Indian inside the child,’ and that meant that we could forever lose our connection to our culture, to our language, traditions, to our land.”

These experiences led John into the Anglo legal system in order to seek justice, not only for his people, but for all Indigenous Peoples. “A sense of injustice means you have to find a way to address these things,” said John. “My late grandmother said, ‘we’re sending you to school so you can speak the language, so you can deal with the crooked manager at the local store.’”

Much of John’s work has centered around treaty negotiations and economic and social rights of his people. “The quality of life in our community—housing, bilingual education, health, language—is the cultural survival aspect of our people as Indigenous Peoples. Our survival depends on our ability to act as the resources that are what people depend on.

“The other big issue is the legal matters related to our title of lands and territories. We have very few agreements and treaties in this part of Canada. We were dispossessed from those lands by legal means from the Crown in the 1840s and ’50s . . . [so] there’s been 150 to 160 years of long-distance fighting for our legal interest. This underlying issue is very important for our survival.”

Restoring Connections
John, who is fluent in Déné, is one of the few people considered an eloquent public speaker in the language. He was the founding president of the Yinka Déné Language Institute, which works to revitalize the Yinka Déné language and culture that has suffered under Canada’s Indian residential school system. “[The residential schools] attacked our linguistic connections, our cultural connections. Not many people still speak our language—mostly [people] in their fifties and sixties. The younger people of course hear that, and pick some of it up, but it’s not as deeply entrenched as it needs to be to survive."

“One Indigenous language dies every two weeks, so it’s a challenge not just to Indigenous Peoples of North America, but globally as well. There are very small groups of people who continue to speak the language and it is really difficult to see and hear when the last speaking member of that language family is gone. Every government and every state needs to work with Indigenous people to keep those languages alive, because when they are gone, that whole stream of cultural connections to that part of civilization is gone forever.”

John says that the Institute has been making important inroads to sustaining Yinka Déné. The Tl’azt’en Nation currently runs a daycare, a Head Start program, and a community-based elementary school. Additionally, the Institute is actively working with elders to document and promote their language, stories, and cultural practices and integrate them into curricula. It’s an uphill battle since there is no state support and “funding is minuscule,” according to John; the government allots approximately $1 million per year for 630 tribes across Canada.

We Have a Responsibility
John was closely involved in the negotiations and adoption of the UN Declaration on the Rights of Indigenous Peoples by the UN General Assembly five years ago, and is now the chair of the UN Permanent Forum on Indigenous Issues. “I was there and fought for the provisions in the declaration. The critical standard is the issue of Free, Prior and Informed Consent, in particular where development is to take place in or on the territories of our peoples.”

“Many will read the Declaration and see. . . that their words are reflected in it,” John says. The Declaration is being translated into Indigenous languages as well; it is an international standard and a point of reference for all of the work being done on Indigenous issues.

As to how supporters of Indigenous rights can contribute to implementing the Declaration, John says: “Dialogue is important. Greater dialogue leads to greater awareness and a degree of development of a critical mass of thinking and greater degree of acceptability of the issues. There are those in Canada who, for example, deny that Indigenous Peoples exist, and those that deny that Indigenous Peoples have any right to their territories and resources. Generally, most people are not aware of Indigenous issues . . . so we have a responsibility to continue to talk about it.
Regardless of what anybody says or what anybody thinks, we have to be our own strongest advocates.”

To learn more about the legacy of residential schools in the US and Canada and what is being done to address prior injustices, read our Cultural Survival Quarterly issue on Truth Commissions, goo.gl/ysxtP.