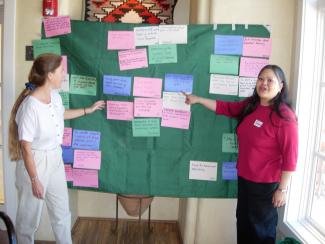 Jackie Tiller (right) in action at a food sovereignty workshop with the Community Food Security Coalition.

Cultural Survival is elated to welcome Jackie Tiller to our staff. Tiller was born and raised in Ketchikan, Alaska. Her mother was Tlingit and her father was Filipino, but, she says, “sadly, my mom left before I was one year old and I was raised by my father and older siblings.” Tiller reconnected with her mother later in her childhood and met more of her relatives, also learning about traditional Tlingit foods like eulachon (a small anadromous ocean fish), herring eggs on pine boughs or seaweed, and smoked salmon.

Tiller started her professional life as an assistant in her local Tribal economic development office. In 1982, she married a man in the U.S. Coast Guard and moved to Virginia. For the next several years she worked for a nonprofit organization administering a USDA Child and Adult Care Feeding Program. In 1995, remarried, between jobs, and raising three boys, she saw an ad in the paper for a program assistant at a Native American nonprofit in Fredericksburg, Virginia and decided to apply. “I did not have a computer and was out of cover letters to submit with my resume, so I had to handwrite one on the only paper I had, yellow legal pad,” she remembers. She got the call for an interview, and then a second interview. Finally, “after two weeks of waiting and nearly giving up hope, I arrived home to a message on my answering machine from First Nations Development Institute saying they had an offer for me, and would I please return the call as soon as possible. I was jumping for joy in my living room and screaming at the top of my lungs before I had even heard the offer. I wanted that job!”

Tiller was offered the position of program assistant in the newly created grantmaking department of First Nations Development Institute, which served reservation-based and rural Native-led nonprofits and Native American Tribes doing economic development. She stayed for more than a decade, eventually leaving when she realized career advancement within the organization was no longer possible. About six months into her next job, a chance email would send her on the career path to which she continues today—or as Tiller describes it, “I received the call that put me back on the path of serving Indigenous Peoples.”

For the last decade, Tiller worked as the administrative, grants, and internship manager at First Peoples Worldwide, helping to bring structure and systems to the organization and its programs with emphasis on Indigenous Peoples grantmaking. She also served as a board member of Native Americans in Philanthropy and the Community Food Security Coalition, and has participated extensively on grant review panels of several federal agencies and other Indigenous nonprofits, advocating for funding to be directed to Indigenous community projects.

“My inspirations have been Indigenous Peoples from around the world who have used their voices and their bodies to protect their territories. I am especially inspired by women, Indigenous and non, who carry the torch for their communities and light the way for others to follow in their footsteps. Women inspire me. They make me feel proud to be Indigenous. . . . I will never cease to be amazed by the resilience of Indigenous Peoples in voicing their rights to resources and demanding their voices be heard.”

Tiller joins Cultural Survival as the Keepers of the Earth Fund grants project manager, where she is responsible for administering and coordinating Indigenous Peoples’ grants for community development. “As grantmakers, we are the holders of the resources,” she says. “Our communities often lack expertise in fundraising and information about sources of support, have no or archaic technology, and often face language challenges. We need to be mindful of the challenges our communities face, especially technologically. We need to be sure we are truly supporting their project as they have designed it, [and to] encourage open lines of communication. We are the donor, not the gatekeeper.”