It Is the Time of the People: MarÍa de Jesús Patricio Martínez 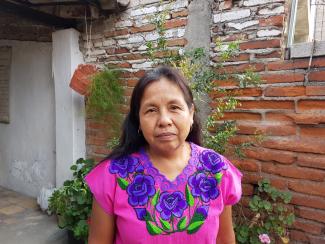 As the first Indigenous woman to run for president, María de Jesús “Marichuy” Patricio Martínez (Nahua) is making history in Mexico. Patricio was chosen as an independent candidate for the 2018 election during a convention in Chiapas that brought together the Mexican Indigenous Governance Council and the Zapatista National Liberation Army. This convention assembled 848 delegates representing 58 Mexican Indigenous communities and established the Indigenous Council of Government for which Patricio is the spokesperson.

For the Zapatista National Liberation Army, the move to enter electoral politics is a break from their historical strategy of working outside the political system. In 1994, the Zapatistas launched a campaign against NAFTA which soon made them “an international symbol of Indigenous struggle and the fledgling antiglobalization movement.” The struggle of the Zapatistas to advance the rights of Indigenous communities now fuels Patricio’s campaign to represent the most marginalized members in Mexican society. After the uprising of the Zapatista National Liberation Army, the community of Tuxpan was invited to participate in a national Indigenous forum held by the movement in San Cristobal de las Casas. This event marked the beginning of Patricio’s career as an activist in her community, as she was elected as the representative of Tuxpan because of her work in fighting machismo and in advancing the rights of her people.

Patricio, a mother of three, was born in the Nahua community of Tuxpan, Jalisco in 1963. From a young age she observed how the women of her community, including her aunts and grandmother, treated the sick using traditional methods passed down in her family. In 1987, Patricio’s mother lost mobility from her waist down and treatment from medical specialists did not improve her situation. Only after seeking medical attention from traditional healers in her community was she able to walk again. This experience motivated Patricio to study traditional medicine in hopes of helping her community. Today, she runs a traditional healing center in Tuxpan where she uses native plants and knowledge passed down to her from her elders to provide services to those who can’t afford medicine. In 2015, she was awarded for her efforts in maintaining traditional knowledge and culture. Cultural Survival spoke with Patricio this past July. 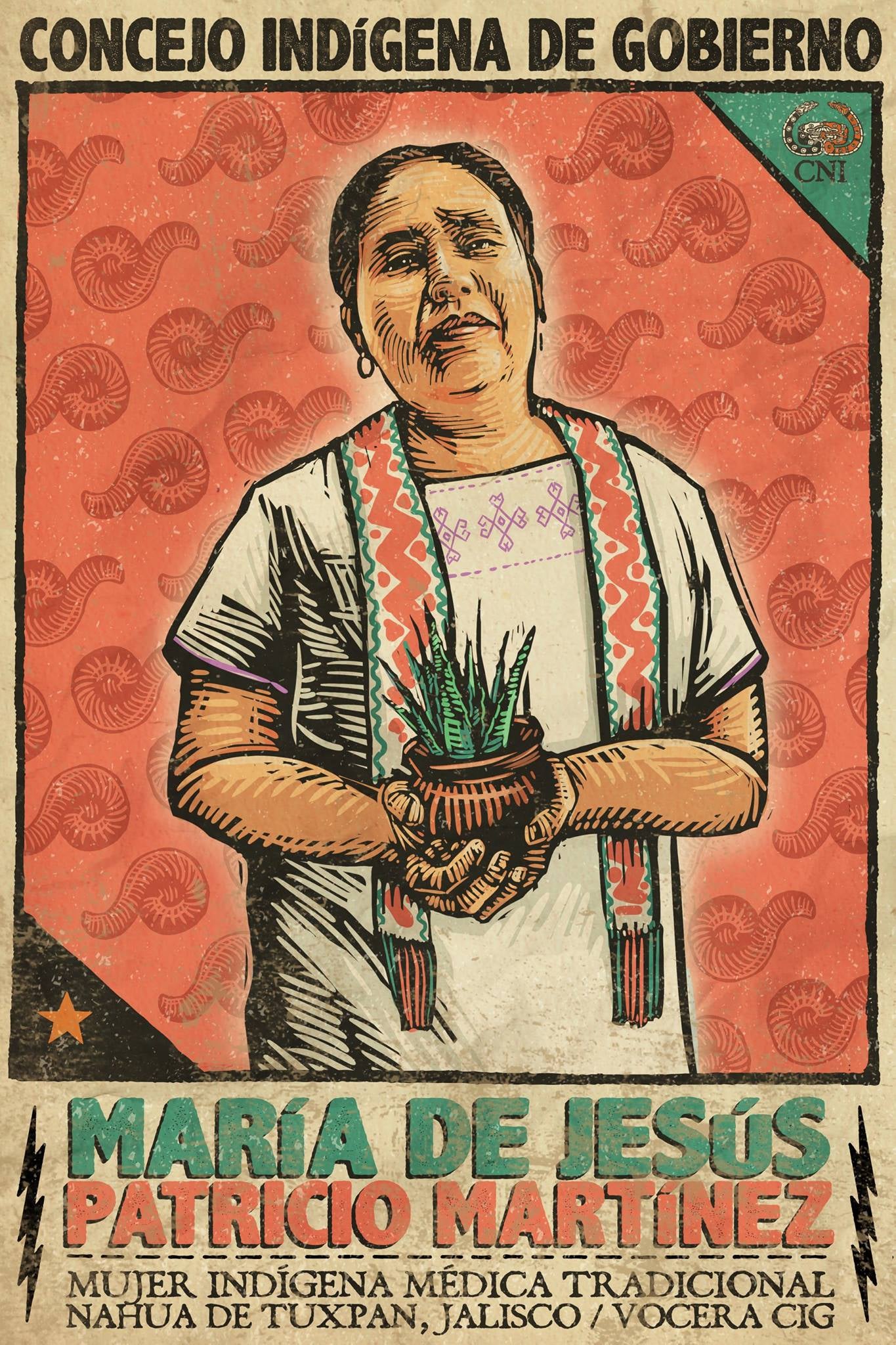 Together, different traditional medicos of the country held a national forum in defense of traditional medicine; it was decided in 2002 that it was necessary to pass this knowledge on to the children and youth. That has been my work in the community, defending that knowledge and working together with women to strengthen their participation in the process of reconstruction of communities. It is not only the role of men to participate but also women, especially with their wisdom that can be used in reconstruction.

CS: What motivated you to participate in the election?
MPM: What motivated me are the problems that are severe for our communities, like the imposition of mines. I don’t know how the government imposes and is able to strip minerals from communities. On top of that, the waste that is left by these companies. Also, the repression on the part of the government against attempts of the communities that fight against their dispossession such as disappearances, death, and incarcerations. Along with all the health problems that exist in the communities, there is no medicine or attention that is given to members of our community. Safety is also a problem, the narcos and the cartels that go hand in hand with the government. We see it as a strategy on the part of the power to destroy the community, to achieve that dispossession.

Those are our primary problems, especially trying to dispossess communities of their cultures and imposing foreign ways on the community. All these problems motivate me to take on this great responsibility to participate; it’s the reason that Indigenous communities look to me. It’s another way to bring visibility to these problems and put them on the table for discussion and to facilitate the connection between Indigenous communities and civil society to unite and begin reconstructing Mexico, which capitalism has been destroying. Those are our intentions and what motivates us to participate. We think we have to use these tools of the power structure, not to end up like them, but in order to [articulate] the voices of the bottom and left, to advance Mexico from the bottom up.

CS: How were you chosen to be the representative of Indigenous communities?
MPM: There was a proposal to integrate the Indigenous Council of Government (CNI). The council members would be named by their communities through assemblies backed by an act. Based on that, a spokesperson was named by the CNI as well as by the Zapatista National Liberation Army who are our Indigenous brothers that come from different communities and who have been participating in the CNI.

It was then at the assembly of May 27 and 28 of this year when the CNI met and a spokeswoman was chosen. The CNI and the Zapatista National Liberation Army discussed the proposal and both agreed and proposed it to me. Then the assembly decided and gave their approval and were in agreement. In that way, I was delegated the great responsibility of carrying the voice.

CS: How did you feel when they chose you?
MPM: At first I was afraid because it’s something very big and I thought maybe I will not be able to do it, but then I saw that it was a task that had been entrusted to me by the community. I took it as a mandate from all the people that I have to carry forward as if they have given me another task. So there is a great responsibility that I feel and that I will take with pleasure because of the trust that the community has placed in me.

And I think that it is not only me, but also the CNI that will be there, because in reality they are the candidate. We cannot register a group to participate; it has to be one person, so it was decided to appoint a spokesperson who would be registered. I had to get almost a million signatures to participate.

CS: What are the goals of the CNI during this election and after?
MPM: Our participation is for the purpose of bringing awareness to the real problems of our communities through Indigenous Peoples and their councilmen. Together we tour the country sharing and collecting information and the thoughts of the communities that we are going to visit. Therefore, our goal is not so much to reach power, but to take advantage of these tools of power so that Indigenous Peoples can bring their problems to light and to facilitate connection between Indigenous peoples and civil society. We want a different Mexico because how it is today does not favor people from below, the working people, the people of communities. Something new must happen, something that belongs to the people from below. The intention is that after 2018 there will be an organization in the country where a new Mexico can emerge.

CS: What are the biggest obstacles facing the movement and what you want to do as a representative of your community?
MPM: The big obstacles come from the repression that has rooted our proposal. In seeing the incarceration of one of the councilmen of Querétaro and the assassination of two brothers from the north of Jalisco who were also participating in the CNI...above all it’s the repression of people who disagree. And the other is that the same people of the communities are used by the power to put them against their own community. But we are aware of all those problems that can occur; we will continue despite what opposes us.

CS: As the first Indigenous woman to run for president in Mexico, what message would you like to share with Indigenous communities all over the world?
MPM: It is the time of the people. It is time that women participate in their communities, they are the ones that give life by having children and taking care of them. The active participation of women is necessary because they are wise and strong. I think that without the participation of women there would be a large gap. It is very important that we walk together, because that’s the way the Indigenous communities are; they are not just men, it’s all of us. And to work with civil society. It is time to unify all these forces so that we achieve the integral construction of all our peoples.