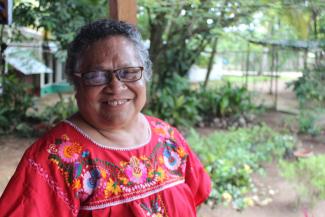 Cultural Survival: You have helped build healthcare, judicial, and governance systems based on traditional Indigenous knowledge in the North Caribbean Coast Autonomous Region of Nicaragua. What do those look like?

There is also coordination between traditional and customary law in communities with the national legislation. Health, education, judicial administration, and land management are under the administration of the communities and in the customary law system. All of these areas coordinate with the rest of Nicaragua to try to have respectful arrangements. We have three levels of governance including a regional autonomous government composed of a regional council of 48 members elected by ethnicity. Under the regional parliament we have different secretaries responsible for health, education, production and development, and the environment. Our autonomous government coordinates with the national government, and we have our own legislative system.

In our region, we have about 300 Indigenous communities. They have their own customary governance systems. They elect their own authorities and these authorities are recognized by their autonomous government. They have control of their territories and their natural resources; forestry, mining, and health are under their administration. Traditional medicine is recognized in our autonomous region, so the health system has the obligation to integrate it. Over the last several years, we have been working on a model of intercultural autonomous health systems where there is coordination between Traditional medicine and Western medicine. 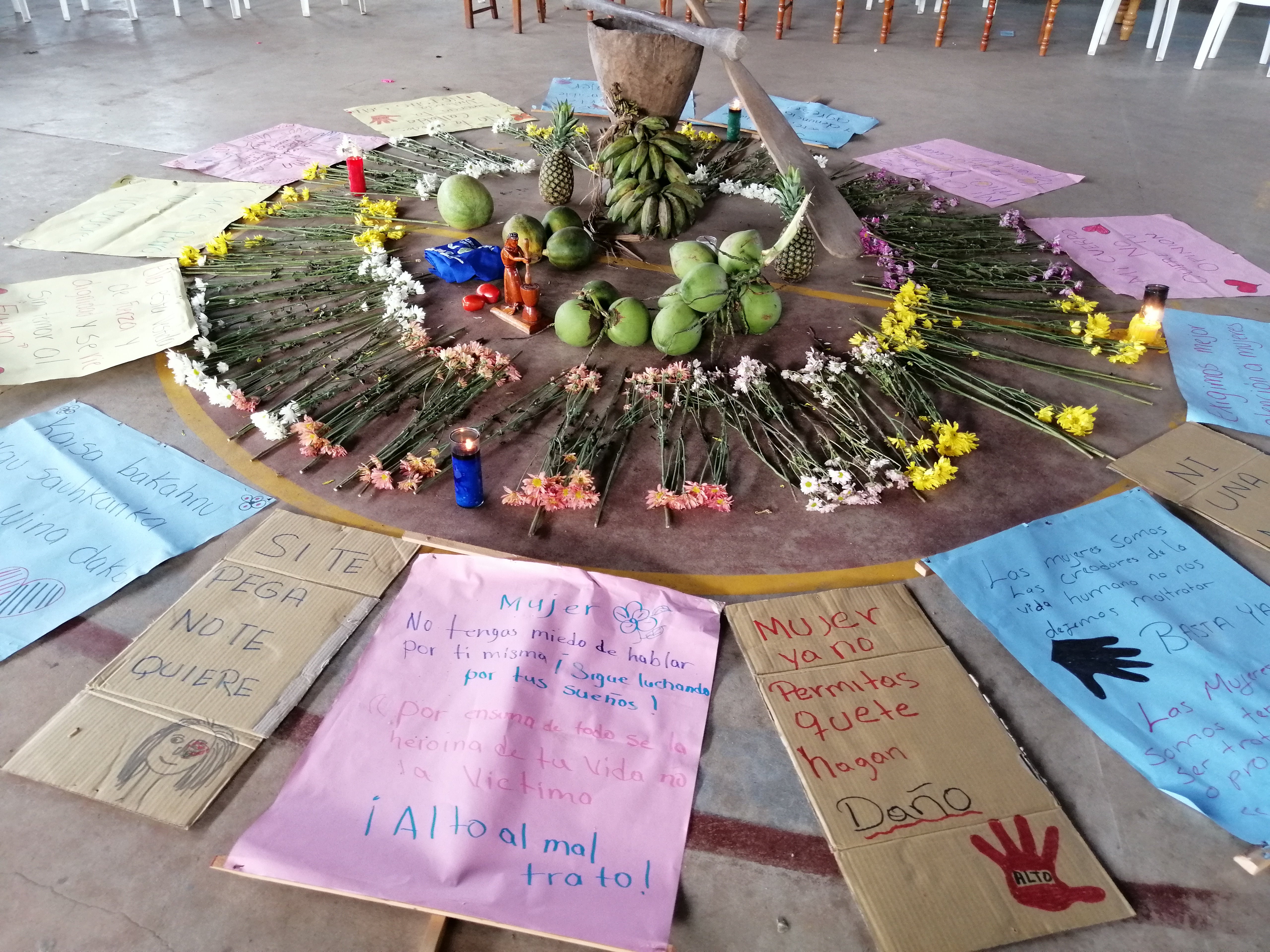 Spirituality is an important part of Indigenous health and well being.

CS: Tell us about your journey toward becoming the first Miskitu doctor in Nicaragua.

MC: I’m from a region that is very isolated on the border between Honduras and Nicaragua. We did not have a high school in my community, so I had to go to boarding school for my high school education. I worked as a teacher before I got a scholarship to go to medical school, which was on the other side of Nicaragua. After I graduated as a doctor I came back to work in my community, but I did not know much about Traditional medicine. I became the only doctor in a hospital that covered more than 300 Indigenous communities. It was then that I realized that there were diseases that I did not learn about at the university, and I realized that I had to coordinate with the traditional healers. That’s when my journey as a doctor respecting Traditional medicine started. My first [experience with this] was for patients who were bitten by snakes; I didn’t have any other treatment and they needed to be treated by traditional healers. I did my specialty in surgery but I realized that surgery was not enough to address traditional health issues, so I did more training in public health. Since then I have focused on how to build intercultural health systems that do not prioritize Western medicine over Traditional medicine, but promote traditional intercultural health systems in which the two health systems can coordinate and use the strengths of one another to solve the problems in our community.

CS: How is Traditional medicine integrated into mainstream medicine?

MC: First, via the law. The national legislation of the Nicaraguan Health System has a chapter that addresses Traditional medicine and it calls for the Ministry of Health to ensure that it’s integrated. The second way is through the coordination and the organization of the family, community, and health system. This model establishes that the public health system exercises control over each one of the areas in our country, each family, each community. It requires that intersectional teams of health workers exercise their work in one area. We should have midwives, we should have traditional healers; they are part of this team. If a pregnant woman is identified by the team as being in need of being close to the hospital, she can travel and stay in a home that has been created in the different areas for pregnant women waiting to give birth, and she can attend that home with her midwife. If she goes to the hospital, she can give birth with the doctor and the midwife together.

The other way in which they coordinate is through epidemiological statistics. We have identified diseases that can only be cured by traditional healers, some of which have a very high epidemic rate. These go on a list of diseases that have to be supervised by the health system. We have a disease, blakira, that can affect a whole community with a collective hysteria. It does not have an explanation in Western concepts of biomedicine. Because it covers so many people and changes life in the community, it is under the epidemiological vigilance system. We have identified at least 35 traditional diseases that can only be cured through traditional healers. There is a fund in the national health system budget to cover the expenses that the traditional healers go through if they have to solve such problems. We have a traditional institute on Traditional medicine at the national level and in some of the regional areas. These institutes document traditional medicines and therapies. They support traditional healers so they can meet and exchange among themselves and sometimes with conventional doctors.

CS: At what point do traditional healers in Nicaragua engage with Western biomedicine, and vice versa?

MC: Traditional healers were very concerned when the first cases of HIV/AIDS appeared. This was a new disease and they did not have a traditional protocol to deal with it. They began to coordinate with Western medicine to see what the other system could do for these types of patients. These new diseases that we are facing are the ones in which I see traditional healers calling on the other health systems. In the cases of maternal health and maternal mortality, we have very strong midwife groups, but sometimes they face problems and call on the Western system, for example when a patient has to go through a caesarean section. These areas are complementary. If you have to strengthen the immune system, traditional healers have some treatments that they use to strengthen your immune system, but sometimes antibiotics are needed.

In the example of blakira, psychiatrists, psychologists, or other Western health workers have come in and tried to solve the problem and realized they cannot. They have to call in the traditional healer to come and deal with the bad spirits that are causing that disruption in the community. For traditional healers, a holistic approach is very important. A traditional healer can bring a lot of experience in how to strengthen immune systems, how to gather the community and share the messages with the communities, how to explain what is happening. But, I don’t think traditional healers can work alone with new diseases. We have moved into a world in which the new epidemics that we are seeing require the participation of Traditional and Western medicine together. If we can do that, I think we can solve a lot of problems.

CS: What does the future of Indigenous health look like in your community? What needs to happen to optimize it, from the State as well as from the community itself?

MC: In my community, we need to continue strengthening this model of family and communal health systems rooted in Traditional and Western medicine. If we can really strengthen this, we can foresee or identify new diseases. For example, we have a lot of diabetes, so if we can change the food system, we can help that region decrease the amount of drugs that are used for diabetes. But this requires participation of both systems. We have started training the health workers to understand the two health systems. We have a school of medicine in the university here in the autonomous region that is training intercultural doctors. Nurses and specialists also need to receive an intercultural training. We have to improve the documentation and evidence that can prove that if these two systems work together, things are better. I give you the example of the coronavirus at this moment: in our region, and the whole of Nicaragua, we don’t have all of the technology that is needed to confront a threat of this type. We have to improve our coordination so we can ensure that communities are closed, and once we get a vaccine, they can receive it. If we do not coordinate, this will be impossible to face. We also need to have good reference systems between Traditional and Western medicines and good centers where we can move patients where they are needed; centers in which they will also respect the communities. These are some of the things that we need to strengthen.

All photos by Teresita Orozco Mendoza.