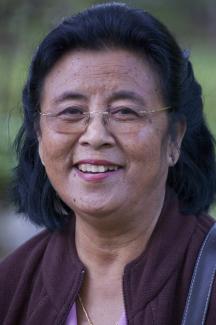 Our series spotlighting the work of our Board members continues with Stella Tamang, a member of the Tamang, one of Nepal’s largest Indigenous groups. She is the chair and founder of the National Indigenous Women’s Federation and co-founder of the South Asia Indigenous Women’s Network. She also chaired the Indigenous Women Caucus at the UN Permanent Forum on Indigenous Issues in 2003 and 2004, successfully pushing for the third session to focus on Indigenous women. In 2005 she was jointly nominated for the Nobel Peace Prize by the organization 1,000 Women for the Nobel Peace Prize. In addition to her work on women’s rights, Tamang founded Bikalpa Gyan Kedra, an organization that works to eradicate child labor among the Tamang by offering alternative educational opportunities.

Born in the Gorkha district of Nepal on the outskirts of Kathmandu, Stella Tamang learned the value of education from an early age. “We are mountain people. I am the first person from my tribe to get a formal education. When my parents went to Burma to work in a mine as laborers, they took us and we had the opportunity to go to school,” she says. Upon being admitted into the formal educational system she was not permitted to learn in her native language, Tamang, but was forced to use Nepalese, the national language of Nepal. This experience made a strong impact. Years later when she learned English, she says, “I became aware of how political decisions get made, and that our people were not involved. I also saw how governmental policies and programs were affecting us and the discrimination that was occurring. The majority of my people were being forced to learn the dominant language and culture and were not allowed to grow up with their own culture and language. Many people never realize why they are suffering, poor, or mistreated. They take it for granted that that is their way of life.”

In response to this realization, Tamang started a center for alternative learning for young Tamang girls. As the girls become teenagers, they are often sent to the capital to work to support their families back home. The jobs are unsafe and the conditions are very poor. So, Tamang got the idea to start a program whereby, Tamang girls were given a safe space to learn and earn simultaneously. The 18-month alternative learning program, Bikalpa Gyan Kendra, invites girls age 13–17 to a residential school where they learn to read and write in their own language, as well as Nepalese, and develop practical skills for possible job opportunities in the future. The girls ultimately decide for themselves whether they want to stay in Kathmandu or return to their villages.

Tamang’s work was initially criticized for creating a rift in Indigenous communities between women and men, but now both groups are active within the Indigenous movement at global and local levels. She says her plan was never to split the movement, but to make it stronger and create a community of co-existence within the Indigenous community. In Nepal, she says, “Indigenous people were not recognized for about 20 years. We were treated as a very different person, inferior, not even recognized as a citizen—so our language, our culture, everything was denied. About 1989, the Nepali democracy movement created an environment in which people, especially Indigenous people, had a little more freedom to express themselves and organize. Of course Indigenous Peoples’ organizations existed before, but they were underground because such organizations were illegal. In 1989 we also got the opportunity to attend international meetings and conferences for Indigenous people, and those meetings were empowering. I don’t know how much the formal agenda of those conferences helped us, but meeting people outside the meeting rooms and hearing experiences was marvelous.

“Back at home I was working at the regional level, ensuring the Indigenous women’s network, ensuring the Indigenous women’s forum, and then I was very active at the UN organizing and getting women recognized. From the UN I started organizing women at a global level, and this is how I became the chair of the Indigenous Women’s Caucus at the UN. Having the Permanent Forum, the first year was a celebration; the second year was on one theme, [and] the third year I said it should be about women because we are talking about half the population of Indigenous people. It was quite a struggle but finally I got it accepted. The best thing that happened was not only at the UN, but all the regions in Africa. Africa had a regional Indigenous women’s consultation, Asia had it, the Pacific, Europe, Latin America...so you know it was a great acceptance. Now Indigenous women are active at the global level as well as at the local level.”

Tamang refers to the global Indigenous rights movement as an extended family. “The fun and excitement is meeting with Indigenous people from different parts [of the world]. They look different and speak different, but the problems they are suffering are the same,” she says. Still, attaining global recognition has been a process. “At the UN level, Indigenous people were not recognized. Now there is a lot of recognition; the UN even has this Declaration of Indigenous people, and we have a forum. Now there is a process. The change, in 10-15 years, the whole question of being recognized at the local level as well as at the global level—I think that is one of the greatest achievements.” Such achievements inspire Tamang to continue working for the full recognition, and acceptance, of Indigenous Peoples. “I want my look to be accepted, I want my color to be accepted. With [our] differences, we should be living together with full dignity,” she says. “This is the world that I want to see: where different colors, different languages, different looks live together without being discriminated. Being accepted, with full dignity.”