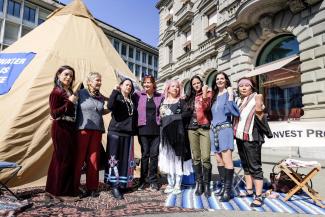 In the Spring of 2018, a third Indigenous Women’s Divestment Delegation traveled to Europe to follow up on previous demands made on government and financial leaders who have invested in corporations and projects tied to Indigenous human rights violations and harms to the global climate and water. As a part of the DIVEST, INVEST, PROTECT Campaign, these women met with leaders in Switzerland and Germany to expose injustices and share the experiences of Indigenous communities confronting development projects on their homelands. Led by Michelle Cook, a Dine/Navajo human rights lawyer, and Osprey Orielle Lake, the executive director of Women’s Earth and Climate Action Network (WECAN) International, this delegation brought new faces along with former delegates to Europe. Waste Win Yellowlodge Young (Ihunktowanna/ Hunkpapa of the Standing Rock Sioux Tribe) and Sarah Jumping Eagle (Oglala Lakota/Mdewakantonwan Dakota), who participated in last year’s delegations, were accompanied by new members Charlene Aleck (Tsleil Waututh Nation) and Monique Verdin (Houma Nation).

Following the success of the first two Divestment Delegations, which played a crucial role in helping to persuade DNB, Norway’s largest financial services group, to sell its $331 million stake in the Dakota Access pipeline as well as being instrumental in the December 2017 decision of Norway’s DNB and Swiss multinational UBS banks to stop renewing their credit facilities with Energy Transfer Partners (the parent company to the Dakota Access Pipeline), the third delegation met with leaders to discuss the Bayou Bridge Pipeline, Kinder Morgan’s Trans Mountain Pipeline, and Enbridge’s Line 3 Pipeline. Delegates spoke of the harmful impacts of these projects at the Credit Suisse Annual Shareholders Meeting; with Swiss government representatives from the Ministry of Foreign Affairs and the Ministry of Labor and Economics; and with representatives from UBS and Deutsche Bank.

In October 2018, a fourth delegation, also led by Cook and Lake and joined by advocates Jessica Parfait (United Houma), Tara Houska (Couchiching First Nation Anishinaabe), Young, and Leoyla Cowboy (Dine), traveled to New York City and Washington, D.C. to meet with Morgan Stanley Capital International and the Equator Principle Association, which has more than 90 member financial institutions. Delegates presented personal testimonies and data to these financial institutions, whose decisions and influence impact the development of fossil fuel projects around the world. Representatives of the Divestment Delegation demanded that Morgan Stanley and the EP Association make urgent changes to policies that allow for dangerous fossil fuel extraction, and instead turn to full implementation of the Indigenous rights to Free, Prior and Informed Consent as well as environmental protections. Public action events were also organized with delegates and allied organizations outside of Chase Bank in Manhattan and the EP Association to deliver a powerful message of unity and support for full divestment from fossil fuels and respect for Indigenous rights. Cultural Survival spoke with delegation members who traveled to Europe in Spring 2018. 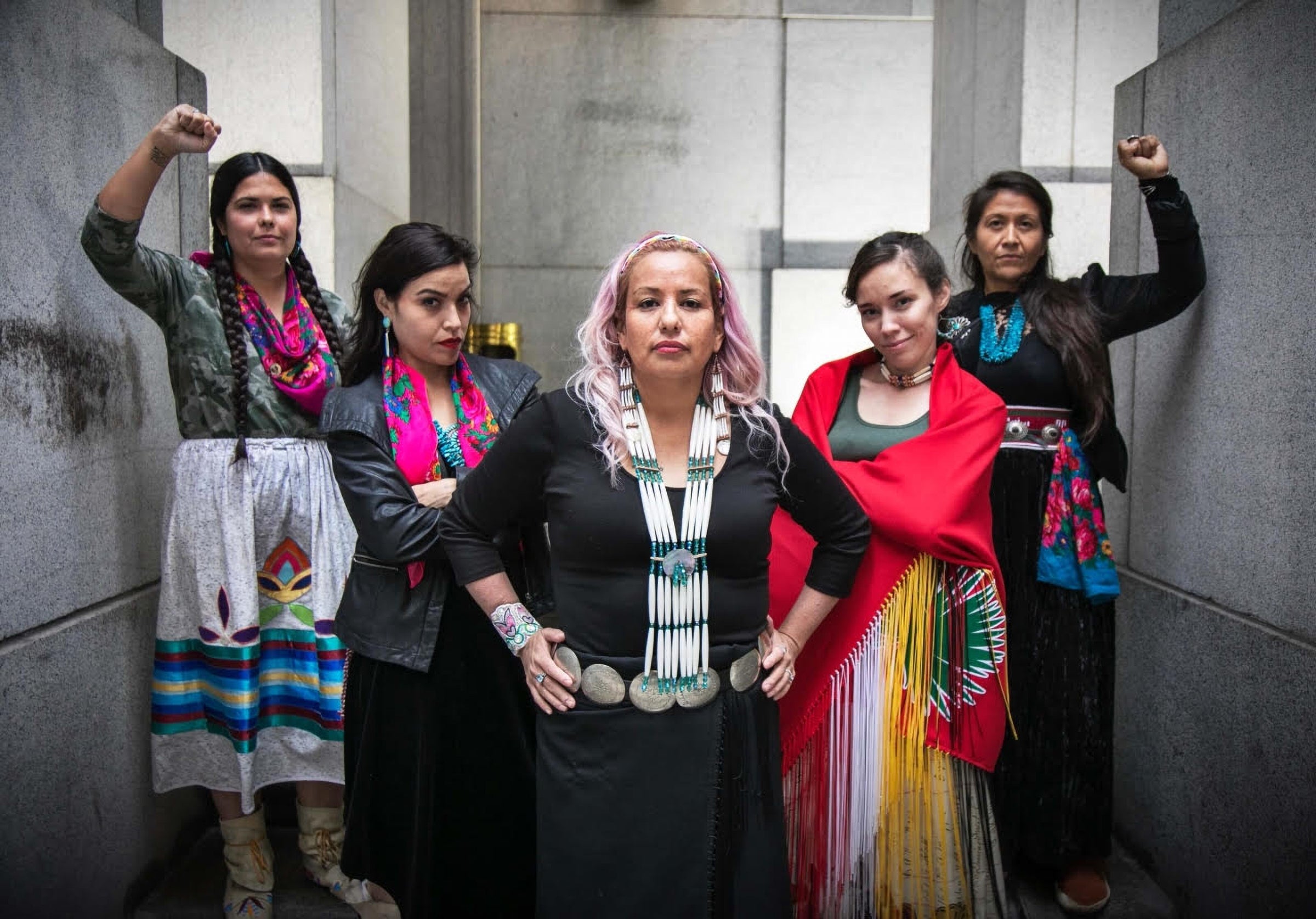 Michelle Cook: This delegation was unique because three of the women currently hold official positions within their Tribal governing structures. This is powerful as they show the diversity of political leadership, legal status, and cultural distinction of Indigenous Peoples that still exists in the United States and Canada today. This delegation was also unique in that we delivered on our promise that we could bring Standing Rock to Switzerland. When we set up camp on Credit Suisse’s doorstep, I felt the strength of our people, our ancestors, the power of our prayer and defiance against these injustices as Indian women. Setting up camp at the gates of these institutions demands that we will be visible, and the role the banks play in perpetuating injustice and harms against Indian Nations will no longer be tolerated or hidden in the darkness but brought into the light of justice and public opinion.

Many banks and governments are still failing to fully acknowledge the impending collapse of the fossil fuel economy and the risks of climate change. Even fewer have recognized that securing Indigenous Peoples’ land tenure and rights is the answer to the climate crisis and protecting the world’s biodiversity. Our strategy has been, and will continue to be, speaking life-affirming truths. [We] will continue to show how Swiss banking institutions are not neutral, but play key roles in perpetuating resource colonialism and climate chaos. On a per capita basis, Swiss banks finance more extreme fossil fuels than any other European nation. Keeping the Swiss financial institutions accountable to human rights and climate targets is therefore critical for the security and health of the world’s economy, Indigenous rights, and climate justice. Engagement with banks through direct contacts and public media relating to divestment is an innovative approach to creating racial justice, economic democracy, and human rights for Indigenous communities. It is also an opportunity for us to share our visions of more just economic structures like public banks, investments in renewables, and investments in the education of women and girls.

We are Nations with a right to self-determination. We, as Indigenous Peoples, are older than these banks, and so are our original systems of value, trade, and economy. We are not just requesting divestment, we are challenging racial oppression facilitated through finance. What is a fossil free world worth if Indigenous Peoples are still treated as second class citizens? Our strategy is one that seeks systemic change and equality, and we are prepared to go the distance and plant those seeds for the seventh generation to harvest.

Charlene Aleck: At Tsleil Waututh Nation we have a Sacred Trust Initiative, which is our sacred obligation to be stewards of the land, water, and air. It is our mandate to stop Kinder Morgan’s Trans Mountain Pipeline and tanker expansion project. The project was approved recently by the federal and provincial governments without Tsleil Waututh’s consent. The Tsleil Waututh community will be directly affected by increased tanker and tug traffic in Burrard Inlet and the oil spills resulting from the project. Construction of the Kinder Morgan pipeline will irreparably harm our environment and cultural values. Sacred Trust’s investor dissuasion strategy targets the financial backers of the pipeline project, including Kinder Morgan shareholders and investors, and the oil companies intending to contract use of the new pipeline.

Our objective short term is to create financial uncertainty by making sure the investors understand that construction of the pipeline is not a “done deal;” that Tsleil Waututh Nation actions will at a minimum delay construction, if not outright kill the project. We intend on attending the Kinder Morgan Annual General Meeting in Houston to deliver the message of the strength of Tsleil Waututh Nation’s opposition to the pipeline expansion and the Nation’s determination to stop it. Longterm hope is that this strategy will affect local and international governments in how these projects are processed with the involvement of First Nations, which will give guidance to financial institutions in how they invest. There is something very powerful in telling your own story. This storytelling brings the focus to the present and human to human. 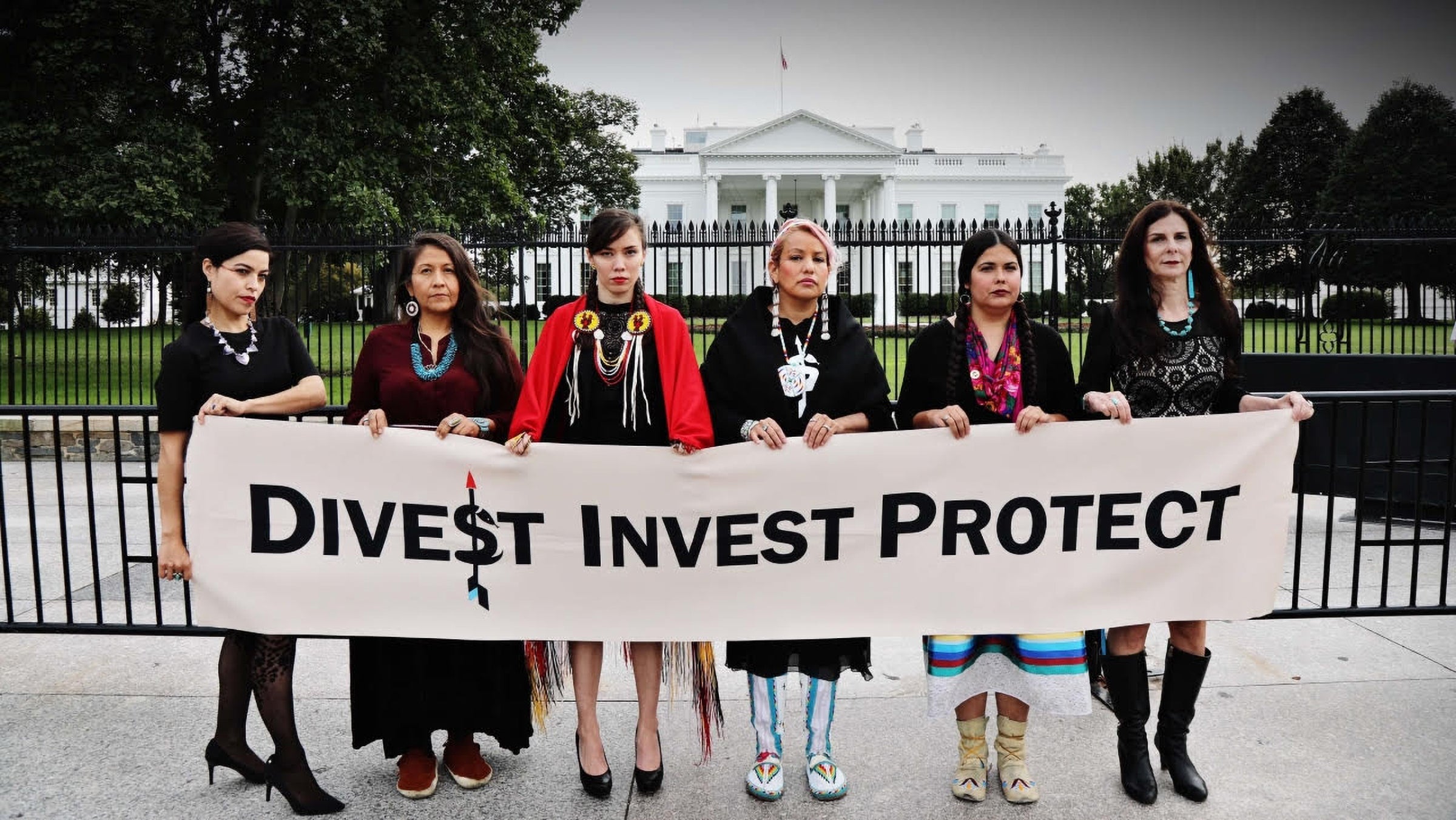 Osprey Orielle Lake: It is far past time for financial institutions to make the responsible action, which is an immediate, managed decline of investment in the fossil fuel industry and an increased investment in safe, clean, renewable energy—that is what is best for our communities globally. Banks need to show leadership and dedication to ecological sustainability and human and Indigenous rights as we face the unparalleled challenges of a world plunging into climate chaos. Moreover, the Divestment Delegations have demonstrated that Indigenous women have long bore the brunt of extractive industries, and despite this, shine powerfully with solutions to the harms that come from these destructive practices. Banks need to listen to Indigenous women and adhere to their demands, which are founded on requests for basic respect for obtaining Free, Prior and Informed Consent of Indigenous communities as required under international law.

As part of the delegation’s work in Zurich, an action was held outside of the Credit Suisse and UBS headquarters in the city’s financial district, during which Indigenous women delegates and allies raised a tipi structure and spoke out for Indigenous rights and urgent climate action. The action was a response to a promise made by delegates during 2017 meetings that if meaningful action was not taken by the bank, Indigenous women would return with their messages and symbols of their homelands. As one of the central actions of the Spring 2018 Delegation, women leaders also attended the Credit Suisse Annual Shareholders Meeting. Each woman took the floor and shared powerful testimony in front of some 1,200 executives, employees, and shareholders, exposing exactly how the bank’s money has contributed both historically and currently to egregious violations of Indigenous rights, human rights, and the health of the global climate. While obstacles are many, our Divestment Delegations have illuminated the power and potential for successful results as Indigenous women leaders meet eye-to-eye with representatives of the entities responsible for immense cultural and ecological devastation in their home regions.

Financial institutions and governments should take note that there is uncertainty in upcoming pipeline projects because resistance movements are growing. Dozens of lawsuits have been filed against Kinder Morgan’s pipeline, and Enbridge’s Line 3 pipeline project risks violating treaty rights of the Ojibwa peoples. The Treaty Alliance Against Tar Sands Expansion, comprised of more than 150 First Nations and Tribes, advocates in opposition to all tar sands pipelines crossing their traditional lands and waters. Indigenous Peoples who live in these territories are fighting for their water, for their health, for their right to live their traditional way of life and not have their sacred sites destroyed. We are making visible the call by many Indigenous and environmental leaders for financial institutions to adhere to their own standards and guidelines regarding rights and environmental protections. The pretense of action must now come to an end. It is time for new social constructs of gender and racial equity; respect for Indigenous rights; transformation of economic frameworks not based on neo-liberal capitalism; and support for governance systems that respect the rights of Mother Earth. It is also clear that we need women’s leadership to generate this path forward.

Top photo: Divestment delegates and Swiss allies during a direct action outside of Credit Suisse and
UBS banks in Zurich, Switzerland. Photo by Alexander Boethius/WECAN International.