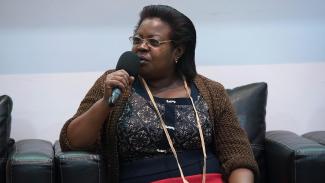 They live hundreds of miles apart but share a common destiny: they are the women of the Batwa, Tepeth, Ik,and Benet Indigenous communities of Uganda. All are mountain dwellers living on the fringes of forests they once called home. They and their families were forcefully displaced without compensation. Yet, these communities have strong economic, cultural, and spiritual connections to those lands, which have not been fully granted by the protected area management regimes. Rendered homeless in their own home, ethnic minorities including Indigenous Peoples in Uganda lack access to and control of productive assets, especially land. Being an Indigenous woman myself, I have had to struggle to get a meaningful education. I have had to work in homes of dominant communities, I have been present when our homes in the forest were torched. I have shed tears.


Indigenous Peoples in Uganda suffer discrimination as they are regarded as less developed and less advanced than other, more dominant sectors of society. They often live in inaccessible regions, are geographically isolated, and suffer from various forms of marginalization, both politically and socially. They are subjected to domination and exploitation within national political and economic structures that are commonly designed to reflect the interests and activities of the national majority. This discrimination and marginalization not only violates the human rights of Indigenous Peoples, but also threatens the continuation of their cultures and ways of life and prevents them from being able to genuinely participate in decisions regarding their own future and forms of development.


In spite of the common injustice faced by Indigenous Peoples, the women of these communities function under yet another discriminatory governance system: patriarchy. They are barred from accessing forest resources by the modern government and constrained by traditional norms, values, and beliefs from having rights to make decisions regarding household resources. When asked how easy it is to manage life as an Indigenous woman, Janet of the Benet Indigenous People had this to say: “It is a multiple tragedy. Everyone,including our own men and the government, takes advantage of us. Even as adults, we cannot do anything without asking for permission. The Bamasaaba (neighboring dominant community) take us as subhuman in public.”


Since the first Rio Conference on Sustainable Development in 1992, many Indigenous men have lost the prestigious position of breadwinner and have suffered a blow to their masculine identities. As men drown their frustration in alcohol, they subject their women and children to domestic violence. When asked how they survive since being forcefully displaced from their forest homes, Dina Nyirarukundo, a woman of the Batwa Indigenous people responded, “We sneak back into the forest to harvest fruits, tubers, honey, and other foods. When we are caught, we are beaten and sometimes imprisoned. We have been turned into thieves of our own inheritance.”

Support for Women in Agriculture and Environment (SWAGEN), works to create strong grassroots community groups capable of actively participating in and meaningfully contributing to mainstream national and international development for equitable and gender sensitive social, economic, and environmentally sustainable development that guarantees dignified lives for all. SWAGEN is implementing a project to build the capacity of Indigenous women to retain their identity and to actively participate in and benefit from government programs.

SWAGEN commissioned a study to understand the extent to which policy, legal, and institutional frameworks create opportunities for the participation of Indigenous Peoples in government programs. The study discovered that Uganda has subscribed to several international legal instruments that oblige the State to observe the rights of minorities within its borders. These include the Universal Declaration of Human Rights (1948) and the UN Declaration on the Rights of Indigenous Peoples (2007). These commitments are reinforced by the National Constitution and by national policies and laws. In spite of these commitments, policy does not translate into practice, and Indigenous People remain marginalized.


SWAGEN advocates for Indigenous women to build on their Indigenous knowledge and adapt it to changing conditions. The Batwa are known to engage in pottery to make utensils. With the advent of cheap plastics posing competition to traditional earthen utensils, SWAGEN is encouraging Batwa women to make clay cooking stoves. The stoves save fuel and conserve the environment, and they can be sold at a profit for the women. SWAGEN is also involved in advocacy for favorable policies for family farming. We pay special attention to women’s empowerment in food sovereignty in order to secure the right of the Ugandan people to choose what to eat and how to produce it. We fight against blanket adoption of GMOs as a solution to world hunger and food shortages precipitated by climate change, land grabs, and use of agricultural chemicals for pests and weed control. We advocate for ecological agriculture over industrial and chemically enhanced agriculture to promote localized systems of agricultural production that support decentralized, “people-run” economies.

As an Indigenous woman, the work SWAGEN does resonates with me. It is, however, an uphill battle. Dominant communities and powerful corporations of extractive industries threaten me with death. I am always looking over my shoulder, fearing that I will be added to the growing numbers of human rights and nature defenders who have been murdered. Because they do not want to lose the cheap labor they tap from Indigenous communities, any attempt at lifting the status of Indigenous Peoples alters these exploiters’ unquestioned beliefs that Indigenous Peoples should not own resources, participate in decision making, and share in benefits. It also disrupts traditional interpretation of cultural needs and cultural worth.


Under the Collaborative Resource Management program, communities around Mgahinga Gorilla National Park, including Batwa, signed memoranda of understanding with the Uganda Wildlife Authority to access bamboo stalks on a controlled basis. The Batwa rely on collection and sale of bamboo stems, fuelwood, honey, and ropes/vines for basketry, legally accessed through Collaborative Forest Management around Echuya Central Forest Reserve and Mgahinga National Park. Not all the resources that the Batwa would like to access have been included in the program. The women continue to advocate for the inclusion of wild yam and honey.

Indigenous Peoples have a number of cultural sites within and around the forests they formerly called home. These include hot springs, worshipping sites, caves, fishing sites, and forest trails. Indigenous people want official access to these sites because of their cultural significance, and to pass on their culture through teaching these practices to their children. At the moment, some do access the sites, secretly. Traditional practices and knowledge have conserved the forests for ages.


Then there is the lucrative tourism revenue sharing. Uganda Wildlife Authority remits 20 percent of its gate entry fees to parishes adjacent to the protected areas. According to the current revenue sharing guidelines, these funds are supposed to be used for projects selected by the communities, such as social infrastructure projects, income generating projects, and projects that address human-wildlife conflict such as problematic animal control fencing. However, the decision making processes of revenue sharing projects has been mainstreamed into local government.

No Batwa are employed in tourist lodges, but a few Batwa living near the forests are employed as tourist and researcher guides and porters. The “Batwa experience” is marketed for tourism in Bwindi and Mgahinga, as are the sale of crafts and tourist entertainment by local community members and Batwa. Tourism near Mount Moroto focuses on mountain climbing. It benefits local people who work as guides and porters and has created a market for crafts. Women who benefit from this opportunity are painfully few, as they are weighed down by unpaid care work in a patriarchal society. When asked whether or not she would like to be a tour guide, Generous Iriamal (Tepeth) says, “Of course I would! I would even do it better than the men because I have mastered all the routes as I gather food. But with whom would I leave my children?”

Loss of connection to traditional lands has grave implications on Indigenous communities and the social fabric. Indigenous women in Uganda are fighting on many fronts—to retain their identity, to have the right to live their lives as they want, to have rights of access and control of resources and meaningful participation in decision making recognized, and to benefit from government programs towards sustainable development. Because of low education levels, non-recognition, neglect, and non-inclusion, it is hard for Indigenous people to organize themselves to enter into agreement with the government for collaborative management of forest resources. Every intervention must recognize Indigenous people as the original inhabitants, and thus the rights holders, to natural resources. Extractive industries should meaningfully involve them in decision making. This can only happen if Indigenous people have representation in decision making bodies such as the local government councils and the National Parliament.


— Gertrude Kenyangi (Batwa) is executive director at Support for Women in Agriculture and Environment (SWAGEN).

45-1 Indigenous Women: The Strength of Our Communities