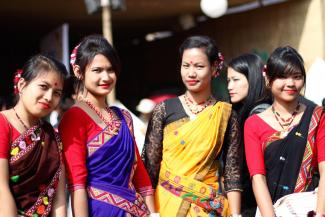 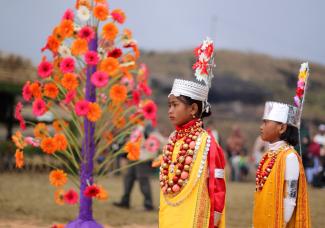 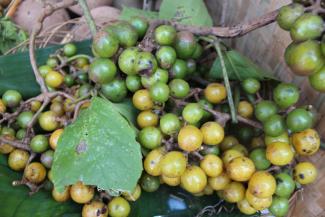 On a precipitous mountain slope in Laitsohpliah, a woman from the matrilineal Khasi tribe grasped finger millet in her hands, a cereal cultivated in India for over 2,000 years that is teeming with calcium and protein. We were in Meghalaya, a state in Northeast India famed for its stunning biodiversity, dizzying mountainous vistas, and a beguiling name that means the abode of clouds. The visit to the village was part of the Indigenous Terra Madre gathering to showcase the profound agrobiodiversity and lively culture that is created and preserved by Indigenous Peoples around the world.

“We need to trust in our wisdom,” said Phrang Roy, founder of NESFAS and a visionary Khasi advocate, who brought Indigenous Terra Madre to his homeland in the hills of Shillong. “What we wanted to combine is not just the question of taste, but that taste is the reflection of biodiversity. If we don’t have forests around our villages, our diets and our food won’t be there.” The five-day event included a conference, visits to nine Indigenous host villages, and concluded with a spirited food festival that exhibited the flavors of Indigenous food cultures across Northeast India and beyond.

“Our food is pre-colonial, it is pre-GMO. It is ancient food, and ancient seeds. It is a food that is part of our soul and our spirit,” said Winona LaDuke, Anishinaabe activist, at the opening ceremony. She proceeded to talk about the resiliency of Indigenous food systems and the sacred connection Native Americans have with their foodways. Dayamani Barla of the Munda tribe in Jharkhand, India, concurred with LaDuke’s remarks. Barla has witnessed how land grabs and displacement of Indigenous Peoples in Jharkhand have devastated their food security, culture, and identity. She also led a long resistance that ultimately stopped the world’s largest steel company, Arcellor-Mittal, from displacing thousands of Indigenous Peoples and farmers with the rallying cry, Loha nahi anaj chahiye! (“We want grains, not iron!”) In 2013, she was awarded the first Ellen L. Lutz Indigenous Rights Award by Cultural Survival for her courageous resistance in the face of the ugly power of corporate might.

Barla emphasized that the current economic paradigm is leading the planet to catastrophic climate change and eroding Indigenous rights. “If we are talking about strengthening food systems, we need to stop the displacement of Indigenous peoples,” she said. “Indigenous Peoples can’t imagine a future where nature is violated. We can’t realize food sovereignty when our lands, forests, and waterways are being destroyed. If we want to sustain life on this planet, all people and social movements need to unite with the resistance of Indigenous Peoples.”

One of the highlights of the International Terra Madre were taste workshops to showcase the incredible diversity of Indigenous food systems. At an insect tasting workshop delegates learned that there are over 1,900 species of edible insects on Earth, and that insects are an important source of nutrition for Indigenous communities in many parts of the world, offering protein, fiber, and “good” fats. First on the tasting menu was a delicious, spicy chutney of weaver ants prepared by women from the Siddi community in Karnataka in Southern India. The chutney was brought by Sunita Rao, founder of Vanastree, a seed saving collective of women, who tend to their food gardens in the forests of the Western Ghats, a biodiversity hotspot in India. The Siddis arrived in India centuries ago as slaves of the Portuguese. “Insects are delicious and have a flavor,” said Rao, nudging the delegates to taste with an open mind. Delegates also munched on carpenter worms, spiders, and grasshoppers.

Cultural Survival’s Indigenous community radio partners from Nepal, Dev Kumar Sunuwar and Jagatman Dong, also joined the gathering. They said that it was crucial for Indigenous Peoples to frame their own narratives to highlight and preserve their food cultures. Sunuwar and Dong are about to launch the first Indigenous television programming in Nepal, where they hope to have cooking shows on traditional foods. “Earlier there was a lot of shame to reveal one’s Indigenous identity. Now that we have produced our community radio shows in eight Indigenous languages, people are slowly starting to have a sense of pride,” Dong said.

Slow Food International founder, Carlo Petrini, gave a passionate talk likening the industrial global food system to a criminal system, imploring that “We need to change this paradigm . . . we risk losing our history and our food heritage.” As a counter to the monoculture paradigm, International Terra Madre organized a food festival of prodigious size that exhibited an array of Indigenous foods—roots, tubers, greens, corns, millets, paddy, drinks, sweets, pickles, and hot foods. A dazzling performance of dance and songs followed, and the crowd was thrilled to hear Ko Meiramew, the theme song of the gathering that was sung in exquisite harmony by Indigenous musicians from Meghalaya.

What made the food festival especially enchanting was a sacred grove at the periphery that wove a stunning, lush tapestry. We walked in contemplation and silence through the verdant, ancient forest. Reflecting on the walk, Barla commented, “Mother Earth gives us so much. I saw a fallen tree that was birthing new life, life that was already taking on the avatar of the forest. Indigenous Peoples always talk about community and collective rights. We know our survival is bound with the survival of nature.”

— Rucha Chitnis is a photojournalist, writer, and founder of Changing the Narrative. Follow her on Twitter: @ruchachitnis