Indigenous Rights Radio On the Air in Rural Ghana 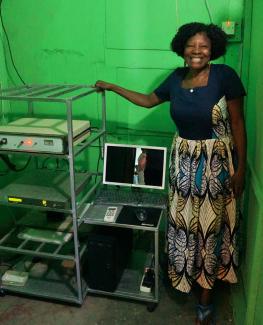 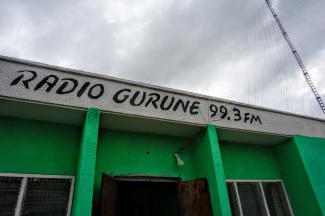 Ghana is home to a rich diversity of languages and cultures, and a mosaic of community radio stations reflect and celebrate this diversity by broadcasting in dozens of tribal languages. Radio Gurune is one of these stations. Located in the town of Bolgatanga in the Upper East region of Ghana, a 20-hour bus ride from the capital city of Accra, the station’s coverage is estimated to reach 2 million listeners in rural areas and carries just over the border into Burkina Faso.

The station was founded by local community leader Lydia Ajono as a development tool for her community to address the needs of marginalized peoples like Indigenous women, farmers, and youth. In telling how she got her start working broadcasting government health programs before the station was founded, Ajono recalled fondly that she “was the first person to speak our native language of Gurune on the radio.”

Radio Gurune broadcasts almost entirely in the Indigenous Gurune language, with a small slate of programs in English, the language of colonization in Ghana. “We know the best thing is to give voice to the voiceless, and in our area the women are voiceless. In our part of the world it is always a challenge to push women to come out and talk or to share their experiences and share their stories, not just to pass on their stories for others to tell for us. So that’s the angle that we try to do,” Ajono said.

Indeed, the station makes a special effort to involve young women as news gatherers, studio managers, and on-air personalities. Radio Gurune has been part of a program to empower rural women in family farming, which is a traditionally male-dominated area.

“We have a strategy to get our women in our radio to understand [farming] issues first. So we empower our women to take the microphone and then be in the studio and go to the field to understand how to interact with women farmers, and also the challenges for women to participate in family farming,” Ajono said. Ajono trains the women in broadcast skills, production skills, news gathering, and in learning all the proper terms in their language.

At a recent conference on community radio in Accra, hosted by AMARC, Ajono shared her experience: “Land is a very critical issue here. Women have access to land but they don’t own land. We see women engaged [as] farm workers but not farm owners. The radio empowers women to understand to be able to come together and to dialogue with community leaders and household leaders who are mostly men, to be able to access fertile lands. We empower them to use compost to be able to enrich the soil so that they can produce. In the area of crops, seeds are now a problem. The seeds that the government or the companies bring in are not always favorable to our farmers. For example, the maize seed—the farmers here raised it and the maize didn’t come, and later they realized the seeds need chemical fertilizer for it to survive. They didn’t harvest anything that year. So the community radio engages them and encourages them to use their traditional seeds and use compost so that they will be able to manage their own farms and store and keep some seed that they can always use.”

For the past two years, Radio Gurune has also been broadcasting Indigenous Rights Radio programs. “I listened to them and thought they really talk about issues that we face here, so we decided to translate them into our local language,’’ Ajono explained.

The station used the scripts provided by Cultural Survival to create a 20-minute radio drama involving two recurring characters from their station’s usual drama programs, in which a male and female character discuss the right to Free, Prior and Informed Consent in their community and the importance of Indigenous Peoples’ right to be consulted about development projects. The program, which aired weekly on Sundays, became very popular with listeners, who flooded the phone lines with calls to discuss the topic. “The listeners are so inspired by the programs. They realize that these are real issues that we are facing,’’ Ajono said.

In fact, the community is currently addressing illegal logging by an Indian company felling ancient mahogany trees within tribal lands. The trees are crucial for agriculture in the area because they surround a stream that provides water into irrigation channels for local farmers. When the trees are cut down, the water is more prone to dry up. Ajono believes that the radio station’s programming on Free, Prior and Informed Consent was central to creating an uproar in the community in response to the logging company, and now the issue has been brought to the forefront of debate by local political leaders.

Station volunteer Akolga Samuel noted, ‘’The radio is coming out with programs that enlighten people to understand the terrain of policies and understand how they can wake up themselves to fight for their rights. Once you are aware of your rights, no politician can cheat you or influence you in any way. [The audience] was much appreciative of these educational programs, which have brought these issues to light in this municipality and across the district.”

Listeners frequently call in to the station to weigh in on the issue of participatory community development. “The Indigenous have their rights to information and development and participation. If you are informed about a project in your community, it makes you ready to participate and decide what will benefit you and what will not benefit you. This right to information is something that will help make decisions to be taken at the grassroots level and run to the top level,’’ one caller said.

Another commended the program for informing local people, in the local language, with a local explanation. “You know, there are certain issues talked about that people don’t understand. But this is being brought to the local level, making the people more aware of what is happening,’’ he told the station in his native Gurune language, urging them to continue broadcasting the program.

A female caller concurred, saying she was very happy to hear the information and praised the station for doing a wonderful job. “This program brings you to life, whether you are literate or you can speak English or not; it’s involving citizens’ participation in development projects. If this is implemented it will help us. Sometimes people who haven’t gone to school think they are vulnerable, but this [policy] will not exclude anyone because it involves participation in decision making,’’ she said.

Another called in to thank the station. ‘’If there is going to be a development or construction, it needs to involve the people who are going to be beneficiaries. For example, take constructing a road. You need to let the people understand why you are constructing it, where the road is going, and what the road is going to do for them. The chiefs, the opinion leaders, the farmers, and the youth all need to understand the content and the benefits of a project before it goes on. In some cases, you see a bulldozer constructing a road through people’s farms without informing them! So it will hurt the people and they have to take a violent way of stopping it. But if this right to informed consent is implemented it will make people aware of how to handle community involvement, or even how to do any participatory work, by sharing techniques of bringing people together to understand the issues before they begin developmental projects. It will make the people live in peace through unity and development for all of them.’’

Photo: Lydia Ajono, Radio Gurune founder, stands next to a 1KW transmitter, which allows the station to reach a listener audience of 2 million in rural Ghana. Photo by Danielle DeLuca.