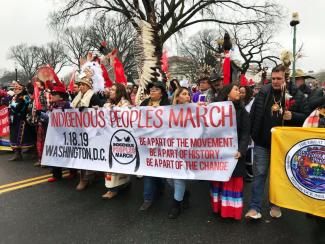 There is such a feeling of empowerment gained from the unification of Indigenous Peoples. On the morning of January 18, 2019, hundreds of Indigenous people gathered on the steps of the Building of Interior Affairs in Washington, D.C., with one mind and one sound to launch the inaugural Indigenous Peoples March. The day started with a unified prayer and call to all for directions. We each faced each direction together. People were adorned in traditional paints, feathers, and regalia while holding their drums and rattles. The languages in the songs that were chanted were diverse, and there were people of all ages and many colors. The interrelations between Indigenous communities that have been existing for thousands of years continue today, and are what make us so close. We will never be able to accept the borders that are intended to divide us. It was beautiful to see the reunions with hugs and conversations being exchanged between people in the movement. The energy and strength one can receive from that exchange is life changing.

There were elders sprinkled throughout the crowd who were also present during the Bureau of Indian Affairs takeover in 1972 on the very same steps. On November 3–9, 1972, a group of around 500 members of the American Indian Movement took over the Interior building as part of the culmination of their cross-country journey in the Trail of Broken Treaties, intended to bring attention to Native issues such as living standards and treaty rights. Many of these elders may not have seen each other since that year. Witnessing the joy they had in watching the younger generation continue to stand in solidarity and in prayer was incredibly moving. The strength from the energy of the intergenerational connection, along with the diversity among global Indigenous people, not only brought us together on January 18, but continues to unify Indigenous Peoples globally.

Upon completion of the morning prayer, we mobilized to march from the steps of the Bureau to the Lincoln Memorial. The songs and chants that vibrated through the buildings and streets of Washington transmitted a powerful feeling across the world when we began marching that day. We marched to empower the voices of Indigenous Peoples; for the missing murdered Indigenous women and those harmed by police brutality; to honor and defend our sacred lands and waters; to protect our children.

With the amount of genocide that is happening in our communities, it is important for the world to see us come together and recognize that what is happening in one community is happening everywhere. Sharing our stories with one another was also eye opening for those who were in attendance. Mainstream media does not have any interest in covering anything we do as Indigenous people, especially what is happening to us. But hundreds of grassroots and underground media groups documented the march and captured so many moments from our perspective. As we funneled down the walkway around the reflecting pool in front of the Lincoln Memorial, the shape of the crowd stretched. When we finally reached the stairs of the reflecting pool there were hundreds of people awaiting our arrival. It was beautiful to see the smiles of people’s faces, and we could all feel that our ancestors were among us and smiling also. 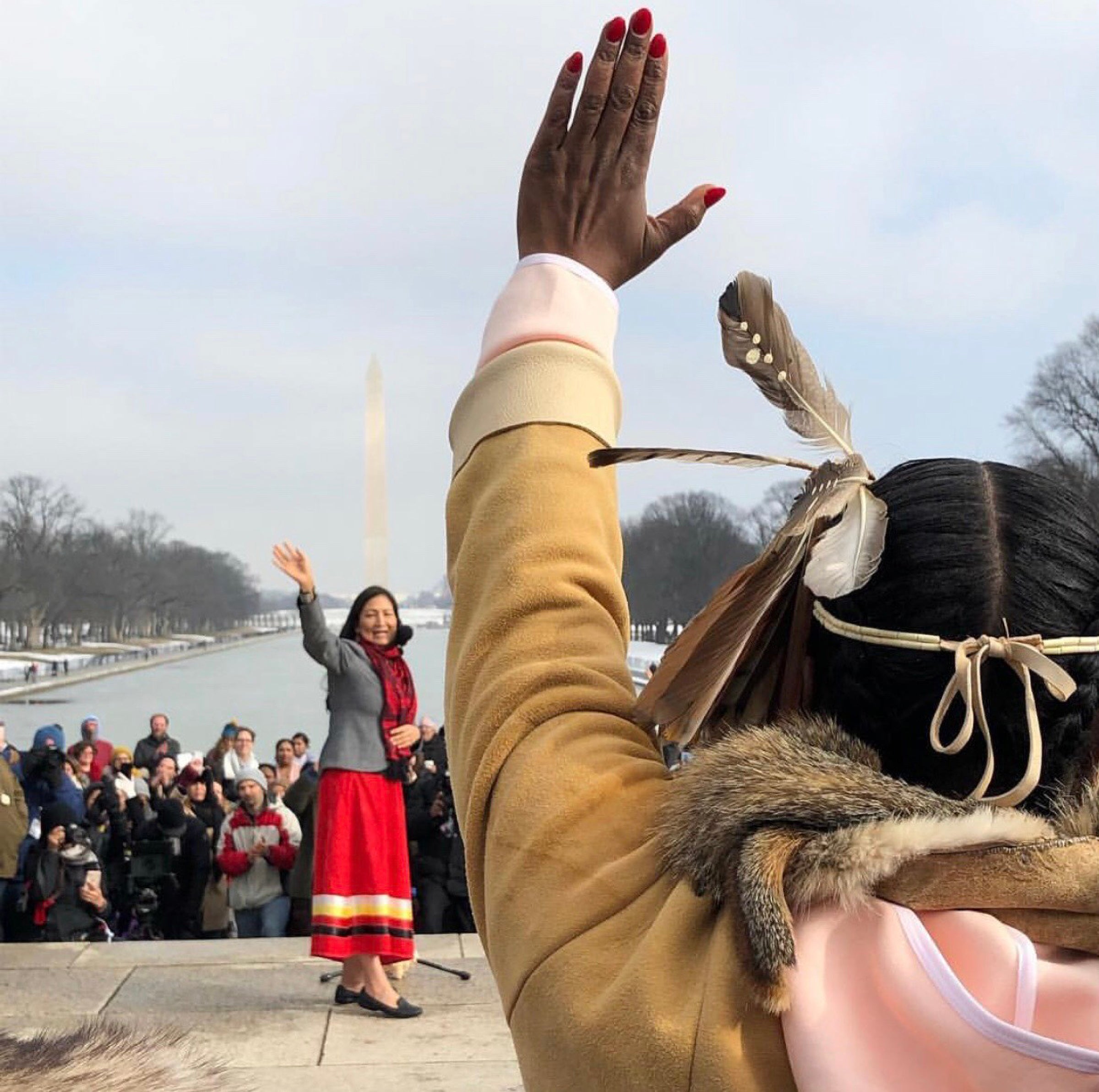 The passion of the speakers engaged many people who were just coming to visit the Lincoln Memorial. We, as Indigenous people, are aware of the injustices happening in our communities and have been screaming to the top of our lungs without being heard. This march grabbed the attention of the entire world. The people who were completely unaware are now aware. There are also people who have inquired how can they become involved and help advocate for our causes. The Indigenous Peoples March was the first of its kind and was an event out of the Indigenous Peoples Movement. All who were in attendance at the march, all who weren’t and wanted to be, or any who hadn’t heard of the march until it happened, can all become a part of the movement. The march was just the beginning. The movement is a collective of Indigenous people from nations all over the world, uniting in the stand against issues that harm our lands, peoples, and respective cultures. The oppressors have a mission of silencing our voices, but that will never happen. We will only become louder and bigger.

There are issues affecting Indigenous men, women, children, and two spirits. Indigenous people from North, Central, and South America, Oceania, Asia, Africa, and the Caribbean are a target of genocide. Presently, many Indigenous people are victims of voter suppression and families are divided by walls and borders. We face an environmental holocaust; sex and human trafficking; and police and military brutality, with little or no resources to fight them and a lack of global awareness of these injustices.

There is something to be said about coming together physically. The world we live in has so much technology that people are questioning why they should take the time to gather in the flesh, in real time. As Indigenous people, we hold a tremendous amount of sacred power, especially when we unite. Technology only allows us to spread this power once we unite. Anyone reading this article is strongly encouraged to share a post, share photos, share videos, become inspired to create art, or write essays and articles on the Indigenous Peoples Movement. Spreading this energy is taking action. It forces those who are turning a blind eye to our injustices to wake up. It also holds those in leadership positions accountable.

Many people do not support marches because they do not believe that they are effective. The Indigenous Peoples March was more than a march; it was a gathering to bring together some of the most hardworking people from all over the globe to take action. Grassroots initiatives begin with a few people, but as more and more grassroots efforts come together they will become a global collective—and then something will be done about the issues in our communities. Marches bring the people together, which makes our voices and network stronger, to the point where what we are marching for cannot be ignored.

When class and color lines are stripped away and it becomes about about human rights, what’s happening in our communities can become part of global conversations. When elected officials such as Haaland not only attend the march, but speak about the injustices happening in Indigenous communities in front of the Lincoln Memorial in Washington, D.C., it is going beyond marching. It’s taking action to the congressional floor.

This movement is right on time. The corruption of our own people who are fighting to take the lead in our communities demands a movement, or else we will perish. The beautiful thing is people are waking up, not only one by one, but in groups. These groups are coming together as one, and the movement is growing larger and larger. The purpose of the movement will be fulfilled. We want to eliminate the borders of our injustices. The pulse of the Indigenous communities around the world demands us to do so.

— Chenae Bullock (Shinnecock/MontauK) is a traditional Indigenous woman, water protector, heritage and cultural preservationist,and humanitarian. She was one of the organizers of the Indigenous Peoples March. Follow her at @aponiwind.