The international system's contemporary treatment of indigenous peoples is the result of activity over the last few decades. This activity has involved, and been substantially driven by indigenous peoples themselves. Indigenous peoples have ceased to be mere objects of the discussion of their rights and have become real participants in an extensive multilateral dialogue that also has engaged states, NGOs, and independent experts.

During the 1960s, indigenous peoples began drawing increased attention to demands for their continued survival as distinct communities with historically based cultures, political institutions, and entitlements to land. Indigenous peoples articulated a vision of themselves different from that previously advanced and acted upon by dominant sectors.

In the 1970s indigenous peoples extended their efforts through a series of international conferences and direct appeals to international intergovernmental institutions. These efforts coalesced into a campaign, aided by concerned NGOs and an increase of supportive scholarly and popular writings. The proliferation of scholarly literature helped establish indigenous peoples' demands among influential intellectual and elite circles. Among the major developments in this movement was the International Non-Governmental Organization Conference on Discrimination Against Indigenous Populations in the Americas, which was organized as a project of the NGO Sub-Committee on Racism, Racial Discrimination, Apartheid and Colonialism. The 1977 Conference contributed to forging a transnational indigenous identity that subsequently expanded to embrace indigenous peoples from other parts of the world. The conference also helped establish a pattern of coordination among indigenous peoples from throughout the world in the formulation and communication of their demands.

Following the 1977 Conference, indigenous peoples' representatives began appearing before U.N. human rights bodies in increasing numbers and with increasing frequency, grounding their demands in generally applicable human rights principles. Indigenous peoples have enhanced their access to these bodies as several organizations representative of indigenous groups have achieved official consultative status with the U.N. Indigenous peoples also have invoked procedures within the Organization of American States, particularly its Inter-American Commission on Human Rights.

Indigenous peoples' contemporary efforts build on the initiative of the Council of the Iroquois Confederacy in the 1920s. Deskaheh, speaker of the council, led an attempt to have the League of Nations consider the Iroquois' longstanding dispute with Canada. Although Deskaheh found support among some League members, the League ultimately closed its door to the Iroquois, yielding to the position that the Iroquois grievances were a domestic concern of Canada and hence outside the League's competency.

The discussion on the revision of the convention proceeded at the 1988 and 1989 sessions of the International Labour Conference, the highest decision-making body of the ILO. The annual conference is comprised of representatives of worker and employer organizations as well as of states. Special arrangements were made to allow representatives of indigenous groups limited participation in the deliberations of the conference Committee designated for the revision. At the close of the 1989 session, the full Labour Conference adopted the new Convention No. 169 and its shift from the prior philosophical stand. The convention came into force in 1991 with the ratifications by Norway and Mexico.

The basic theme of Convention No. 169 is indicated by the convention's preamble, which recognizes "the aspirations of [indigenous] peoples to exercise control over their own institutions, ways of life, and economic development and to maintain and develop their identities, languages, and religions, within the framework of the States in which they live." Upon this premise, the convention includes provisions advancing indigenous cultural integrity, land and resource rights, and non-discrimination in social welfare spheres; and it generally enjoins states to respect indigenous peoples' aspirations in all decisions affecting them.

ILO Convention No. 169 is significant to the extent it creates treaty obligations among ratifying states in line with current trends in thinking prompted by indigenous peoples' demands. It is now evident that states and other relevant actors have reached a certain new common ground about minimum standards that should govern behavior toward indigenous peoples, and it is further evident that the standards already are in fact guiding behavior. Under modern theory, such a controlling consensusconstitutes customary international law.

A watershed in relevant United Nations activity was the 1971 resolution of the Economic and Social Council authorizing the U.N. Subcommission on Prevention of Discrimination and Protection of Minorities to conduct a study on the "Problem of Discrimination against Indigenous Populations." The resulting multivolume work by special rapporteur José Martínez Cobo was issued originally as a series of partial reports from 1981 to 1983. It compiled extensive data on indigenous peoples worldwide and made a series of findings and recommendations generally supportive of indigenous peoples' demands. The Martinez Cobo study became a standard reference for discussion of the subject of indigenous peoples within the United Nations system. Moreover, it initiated a pattern of further information gathering and evaluative work on the subject by experts working under the sponsorship of international organizations.

Upon the recommendation of the Martinez Cobo study and representatives of indigenous groups that attended the 1977 NGO Conference, the U.N. Human Rights Commission and the Economic and Social Council approved in 1982 the establishment of the U.N. Working Group on Indigenous Populations. The working group's original mandate was to review developments concerning indigenous peoples and to work toward the development of corresponding international standards. The scope of the working group's activity subsequently was expanded to include a study on treaties between indigenous peoples and states and another on indigenous cultural and intellectual property. Through its policy of open participation in its annual one-or two-week sessions, however, the working group has become an important platform for the dissemination of information and exchange of views among indigenous peoples, governments, NGOs, and others.

The United States contributed notably to the ILO process. Representatives of a total of 39 governments participated in the conference committee, in addition to the worker and employee delegates that are part of the "tripartite" system of governance in the ILO. The ILO treaty revision process accelerated the international discussion of indigenous peoples' rights by focusing it on the adoption of a normative instrument within a fairly short time frame.

The draft U.N. declaration goes beyond Convention No. 169, especially in its bold statements in areas of indigenous self-determination, land and resource rights, and rights of political autonomy It is clear that not all are satisfied with all aspects of the draft declaration developed by the subcommission working group. Some indigenous peoples' representatives have criticized the draft for not going far enough, while governments typically have held that it goes too far. Nonetheless, a new common ground of opinion exists among experts, indigenous peoples, and governments about indigenous peoples' rights and attendant standards of government behavior, and that widening common ground is in some measure reflected in the subcommission draft.

Other international initiatives, as well as already developed normative instruments, contribute to a new generation of international consensus on indigenous peoples' rights. In 1989 the state parties to the Amazonian Cooperation Treaty agreed to establish a Special Commission on Indigenous Affairs with the objective of "[e]nsuring the effective participation by each Amazonian Country's indigenous populations in all phases of the characterization of indigenous affairs," especially in regard to development programs. The commission subsequently adopted a work plan giving priority to the recognition and protection of indigenous land and resource rights. A larger segment of the indigenous peoples of the Western Hemisphere benefit by the creation of an Indigenous Peoples' Fund, pursuant to a convention signed at the Second Summit Meeting of Ibero-American Heads of State in 1992. The fund is to address the development needs of indigenous peoples in countries of Latin America and the Caribbean, in accordance with decision-making procedures that include representative indigenous organizations.

In 1991 the World Bank adopted a revised policy directive in view of the pervasive role the Bank plays in financing development projects in less-developed countries where many of the world's indigenous people live. Much of the discussion within international institutions about indigenous peoples has focused not just on the potential benefits of development programs aimed specifically at indigenous groups, but also on the damaging effects of many industrial development projects that have taken place in areas traditionally occupied by indigenous groups. The World Bank adopted Operational Directive 4.20 after a period of expert study that helped reshape attitudes within the bank toward greater programmatic action concerning indigenous peoples affected by bank-funded projects.

Resolutions adopted at the 1992 United Nations Conference on Environmental Development include provisions on indigenous people and their communities. The Rio Declaration, and the more detailed environmental program and policy statement known as Agenda 21, reiterate precepts of indigenous peoples' rights and seek to incorporate them within the larger agenda of global environmentalism and sustainable development. The Program of Action adopted by 1994 U.N. Conference on Population and Development similarly includes a part on indigenous people and affirms prevailing normative assumptions in this regard.

In its 1989 resolution "on the Position of the World's Indians," the European Parliament expressed its concern over the conditions faced by indigenous peoples and called on governments to secure indigenous land rights and enter consultations with indigenous groups to develop specific measures to protect their rights. The European Parliament adopted another resolution in 1994, on "Measures Required Internationally to Provide Effective Protection for Indigenous Peoples." The 1994 resolution holds that indigenous peoples have the "right to determine their own destiny by choosing their institutions, their political status, and that of their territory."

More generally emphasizing the underlying need for international attention and cooperation to secure indigenous peoples in the full enjoyment of their rights are: the 1972 resolution of the Inter-American Commission on Human Rights identifying patterns of discrimination against indigenous peoples and stating that "special protection for indigenous populations constitutes a sacred commitment of the States;" the Helsinki Document 1992-The Challenge of Change, adopted by the Conference on Security and Cooperation in Europe, which includes a provision "[n]oting that persons belonging to indigenous populations may have special problems in exercising their rights;" and parts of the Vienna Declaration and Programme of Action adopted by the 1993 United Nations Conference on Human Rights, urging greater focus on indigenous peoples' concerns within the U.N. system.

Burger, Julian. 1987. "The State of the World's Indigenous Peoples." Report from the Frontier London: Zed Books. 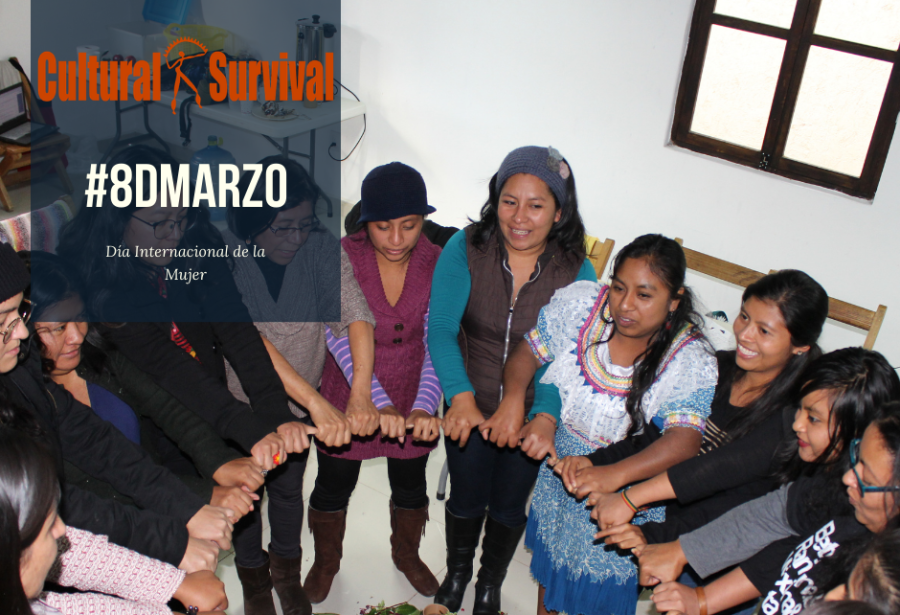 8 Things to do on Mother Earth Day!