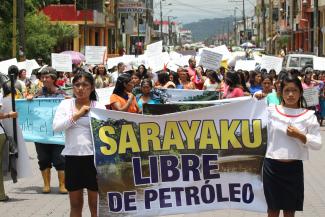 On March 21, 2016, International Women’s Day, an Amazonian women’s alliance was born when Indigenous women from seven nationalities— Kichwa, Sápara, Shiwiar, Shuar, Achuar, Andoa, and Waorani—joined forces for the first time, marching together in defense of their rights, rainforests, and future generations. Over 500 Amazonian women, men, and allies made history as they descended on the streets of Puyo, Ecuador, chanting, “What do we want? Our rights and territories! Living forests!” Coming from remote communities, local towns, and provinces by foot, canoe, bus, and plane they came to denounce a newly signed contract between the Ecuadorian government and Chinese-owned corporation Andes Petroleum granting access to oil in Indigenous territories. Contrary to Ecuadorian and international laws, these communities were not consulted, nor had given their Free, Prior and Informed Consent for these oil activities.

Steadily, Amazonian Indigenous women’s leadership continues to grow. Mirian Cisneros was elected president of the region of Sarayaku in May 2017. She recently gave a powerful intervention to Ecuadorian President Lenin Moreno at a historic dialogue with Indigenous leaders. This meeting, a culmination of a 2-week, 200-mile march to Quito demanding an end to resource extraction on Indigenous territories, led to victory as Moreno declared an end to all “new” oil and mining concessions. In December 2017, Nema Ushigua became the first female president of the Sápara nationality. After years of division, she secured government recognition for the Sápara federation, advancing their efforts to maintain their language, culture, and territory threatened by oil drilling. Highly vulnerable, with a population of less than 500, the Sápara are recognized by UNESCO as an Intangible Cultural Heritage.

“It is truly an honor to work in solidarity with Indigenous Amazonian women who are leading their people, and are also leading voices in the global movement to protect sacred territories, Mother Earth, and future generations. They truly inspire me,” said Leila Salazar-López, executive director of Amazon Watch, a California-based NGO working to stop Amazon destruction, advance Indigenous solutions and support climate justice. Last November, Amazon Watch accompanied a delegation of Indigenous Kichwa leaders from Sarayaku to attend the 23rd Conference of the Parties (COP23) to the United Nations Framework Convention on Climate Change in Bonn, Germany. Mirian Cisneros was joined by Kichwa leader Patricia Gualinga, known for her involvement in the historic Sarayaku v. Ecuador victory where the Inter-American Court of Human Rights ruled in favor of the Kichwas’ right to consultation prior to industrial projects on their land. They had come to promote their Kawsak Sacha “Living Forest” proposal, a comprehensive vision for living in harmony with the natural world based upon their ancestral practices. The Living Forests vision is vital for many reasons, most fundamentally that maintaining the ecological balance of the Amazon is essential to Earth’s Local Communities and Indigenous Peoples’ Platform health and capacity to mitigate climate change. The Amazon, long playing the critical role of sequestering carbon, is now rapidly on its way to becoming a carbon source due to deforestation.

“My message here at COP23 for the people, for allies of the world, is that we need to fight together [and] unite forces, because the states that are here speaking in our name are at a negotiating table where supposedly they are looking for solutions—but these solutions are for them, not for Indigenous Peoples,” Cisneros said. “Our people are in our communities, while they are here making decisions for us. They are putting prices on our natural resources, they are putting prices on us, without fully comprehending that within our territories we exist as communities with huge wisdom, knowledge, science, technology.”

When Gualinga was asked to represent the global climate justice movement at the High-Level Segment at COP23, her impassioned speech contrasted sharply to those by heads of governments. “Climate change is not a business . . . we, the grassroots communities and Indigenous Peoples of the world, we have the real solutions. From the people of Sarayaku to Standing Rock . . . we are all fighting against destruction and for a decent life. We are fighting for climate justice!” On January 5, an unknown assailant threw rocks, breaking the windows of Gualinga’s home while yelling repeated death threats. Threats and harassment of Indigenous leaders, especially women, are on the rise. Undeterred, Amazonian women rallied in a press conference, expressing their solidarity: “We Amazon women are united and strong and have a lifelong commitment to the defense of Mother Earth. Although they try to frighten us, we will not be defeated, and we will continue to stand united in struggle, no matter the costs!” In response, the women are once again marching on International Women’s Day in Puyo. For more information, visit: www.amazonwatch.org/women.

—Miriam Anne Frank has worked on Indigenous issues for IPOs, NGOs, international organizations, and foundations as an independent consultant, and teaches on these topics as a lecturer at the Department of Cultural and Social Anthropology, University of Vienna.