If We Do Not Speak, People Will Continue to Ignore Us: Jose Gaspar Sánchez 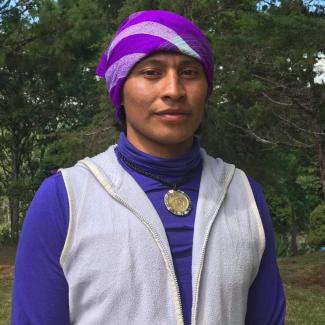 As an Indigenous gay man, it has not been easy. I have had to face the rejection of family and community, and I made the decision to flee the environment of violence and discrimination that exists in Honduras. I have always said that we Indigenous gays face double or triple discrimination— first for being Indigenous, then for being gay, and finally for being of limited economic resources. With money, everyone respects you. A lot of gays are chased from their homes and their families based on principles under the guise of morality or religious issues; these are factors that promote hatred and racism.

Our job at the Council of Popular and Indigenous Organizations of Honduras (COPINH) is to report violations of human rights. My role was always in community radio. I accompanied communities when they had to file complaints, and organized workshops and talks about ILO Convention 169 because of concessions granted by the State of Honduras to private companies. Internally there has always been a struggle about raising awareness at the level of the community and organizations which we are a part of. One of the important achievements that I can recognize about this work is that there have been advances within COPINH, that the space of sexual diversity was achieved. When we were in a general assembly choosing our coordinating team, to create an open space for sexual diversity, it was exciting to see women and men raising their hands in favor and without anyone opposing. Yet when we arrived in the communities, talking about the subject was strange. People began to feel uncomfortable, to criticize the space and the whole thing.

I decided to come out in 2013. The first person I talked to about this was Berta Cáceres. I started talking about it and I explained what I felt. The answer I received from her was supportive. She told me that I didn’t have to feel shame, I didn’t have to feel sorry for being who I am; rather, that I should be proud. Later, it was the same with my family, with my mother more than anything. I was rejected by my brother at first. At COPINH, I came out publicly in an assembly that was held in May 2014. That was where we took the opportunity to open the space of sexual diversity within the organization. I began to notice how some people no longer wanted to shake my hand. They greeted me differently. But as we began giving workshops and talking about the issue through community radio, the environment has improved. I believe that there is an understanding on the part of the partners. It is not that Indigenous Peoples are ignorant about these issues that have always existed; they have just never had a space to talk about it.

We are in a fight. We are partly invisible for fear of saying who we are, for fear of being attacked, for fear of being thrown out. If we do not speak, do not discuss it, people will continue to ignore us. Within the workshops on any subject, we always take advantage of the forum to raise awareness. It happens that the agendas are full of political and economic issues. Our organization attends lots of cases and almost never is there room to speak. I remember having been in national spaces such as the Platform of Social and Popular Movements of Honduras, a space that brings together 36 organizations in the country. With all the issues that were to be discussed, we were always trying to put the LGBTQIA+ community on the agenda. I think that despite the difficulties, we have progressed little by little.

The coup d’état of 2009 made all the organizations and a large part of the Honduran people go out into the streets to demonstrate to demand that constitutional order be restored. That’s where the flags began to come out. I remember once in one of those demonstrations that people were surprised when they saw a rainbow flag. They kept asking about which party it belonged to. That is where we began to explain that this flag represents sexual diversity, and we educated the country that way. The Free Party that was formed after the coup opened a secretariat of sexual diversity within the party and was a great achievement for the LGBTQIA+ community of Honduras. Before the coup, LGBTQIA+ organizations did not participate in politics; we were more isolated, the leaders of these organizations have been killed. That’s where it started, talking about empowerment as LGBTQIA+ people and getting into politics to discuss or debate our issues.

The current fight in Honduras is not about seeking the right to marry. The first thing we are asking for from the State is security because there are hate crimes. We ask for our rights to be guaranteed, that we not be discriminated against for going to the hospital or a school (we have had cases of trans people have been taken out of class). The church attacks us like conservative parties. They will always oppose us, creating obstacles so that we do not advance. There are evangelical pastors who have used the national media to campaign against the struggle of LGBTQIA+ organizations.

It will always be difficult to talk about these issues, but if we don’t put them on the table, nobody wants to discuss them. This is also part of recognizing our roots. In Indigenous communities in the north and the south, we were not previously frowned upon for being diverse, but rather we were people of respect; they called us people with double spirits. In the wake of colonization, negative concepts were created regarding our identity or our bodies. The claims we are making break that silence and also break the concept of seeing ourselves as rare people, as if we were coming from another planet. Religions have promoted patriarchy. The Lenca people, where I come from, are historically macho, very patriarchal, but from the work of women’s organizations we are dismantling these concepts. With COPINH we have made women free to own the land, which was not possible before.

I would like a society where children can express themselves freely as they grow up and do not have to hide. We live hidden by fear, by rejection. The education system needs to educate people on these issues. The current one is not designed to teach, but simply to train workers for the maquiladora industries. Changing this model is one of the demands we make to the State of Honduras, because it is a system rooted in homophobia and racism.