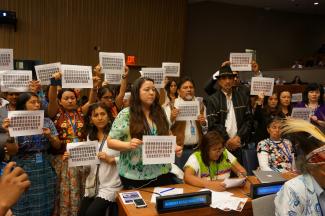 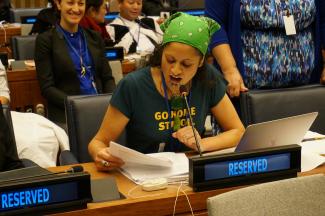 The United Nations Permanent Forum on Indigenous Issues (UNPFII) is an advisory body to the Econom- ic and Social Council that meets annually to discuss Indigenous issues related to economic and social development, culture, the environment, education, health, and human rights. The intensive 10-day session brings together Indigenous Peoples, member states, UN agencies, programs, and funds as well as academics and activists at UN headquarters in New York to exchange best practices on advancing Indigenous Peoples’ rights. For many delegates, the personal measurement of successful participation is the delivery of an intervention on at least one agenda item, opti- mally with their specific situation being cited in the Forum’s concluding observations. While the months leading up to the Permanent Forum offer opportunities to ensure equality and dignity for Indigenous Peoples, (see CSQ issue 38.4), the time immediately afterward is equally significant. Adopting a strategy to prepare for the Forum can result in tangible im- provements in the daily lives of Indigenous Peoples. Follow- ing are specific steps to help maximize the followup from the Forum experience.

Immediately after the Forum, it is crucial to take advantage of the opportunity to meet with officials from UN agencies, programs, and funds that participated in the session as well as other institutions that didn’t attend but have mandates pertinent to promotion and protection of Indigenous Peoples’ rights. You can arrange meetings with these organizations when in New York, as most have offices located within a block of UN headquarters. These meetings are an opportunity for two styles of “asks:” one to immediately cease a project that has been harmful to Indigenous Peoples, and one to propose a specific new program that would enhance respect for Indig- enous Peoples’ rights. It is also a good idea to request specific contact from the organization in-country upon return to one’s homeland. It is possible to outline the various organizations’ global gatherings to note the specific agenda items relating to Indigenous Peoples and organize opportunities to actively participate to ensure Indigenous perspectives are part of the global decision-making progress on the themes significant to Indigenous societies. One example is the United Nations Educational Scientific Cultural Organization meeting in Paris in the fall. It is possible to review the agenda prior and plan to participate if relevant related rights issues are being discussed.

Once the Permanent Forum Report is complete, it is present- ed at the annual UN Economic and Social Council, a meeting that is alternately hosted in New York and Geneva every year in July. The recommendations go forward with a resolution being adopted. Indigenous Peoples can follow and attend with Forum member experts in attendance to shepherd the resolution through the Council to ensure Indigenous intent is protected in the UN process. During the meeting, Indigenous Peoples can participate to ensure the original language and integrity of the Permanent Forum recommendations are protected.

October is an important month to apply for funding and begin thinking of an outcome that can be enhanced through Permanent Forum participation and can mobilize Indigenous Peoples to ac- tion in one’s community. The UN Voluntary Fund for Indigenous Peoples will announce new funding cycles and deadlines. It is important to consider mentoring youth and including new voices to continue the legacy of Indigenous Peoples at the UN. It is also an opportunity to bring in new activists working at the commu- nity and country level to see influence of international institutions as additional advocacy tools to protect Indigenous rights. Other important institutions meeting in October are both in New York and Geneva.The UN General Assembly Third Committee will be con- sidering current conditions in countries with many UN missions bringing their Geneva-based staff to serve in New York. There will also be many UN Human Rights Council special procedures par- ticipating, so it will be possible to review the country visits and also thematic reports being presented. In Geneva, the UN Social Forum is a potential space to send representatives to speak. Each year it has a different theme utilizing a human rights framework to focus on denial of fundamental freedoms. Indigenous Peoples can examine the agenda and pursue participation by coordinating side events, and also be included on main panels to provide in- sight on current topics sharing firsthand information connecting the theme to the actual denial of dignity taking place in Indig- enous nations.

All Photos By Danielle DeLuca
Image One: 2015 UNPFII delegates stand in solidarity during an intervention on disappeared students in Mexico.
Image Two: Catherine Murupaenga-Ikenn (Maori) makes an intervention at the UNPFII in April.