Honoring, Protecting, and Defending the Salmon 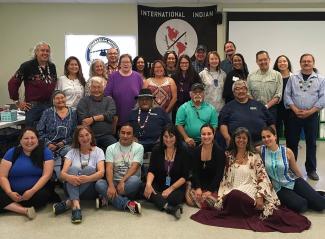 Keepers of the Earth Fund is a small grants fund designed to support Indigenous Peoples’ community advocacy and development projects. Since 2007, the Fund has provided grants and technical assistance to over 350 Indigenous-led projects in 64 countries around the world, totaling nearly $2.5 million. Here we highlight a grantee project organized by International Indian Treaty Council.

Through a Keepers of the Earth Fund special initiative grant, the participants developed an action plan based on Free, Prior and Informed Consent to address imposed development, environmental contamination and government restrictions that impact their traditional hunting, fishing, and gathering territories and jeopardize the Ahtna Athabascan and other Salmon Peoples’ way of life.

The participants also affirmed their cultural and spiritual connections to the salmon and to each other, presented information about current threats to salmon health and survival in their regions, discussed the importance of building inter-Tribal consortiums and networks to strengthen their voices, and shared solutions based on traditional knowledge and practices as well as new sustainable technologies.

On August 5, the participants adopted the Thank You Creator for Salmon Declaration by consensus, a proposal of 27 strategies to protect and defend the salmon and the ecosystems that sustain them, and to uphold the inherent and treaty rights that support Indigenous Peoples’ food sovereignty from community to the international levels. The Declaration emphasize the central importance of initiatives and responsibilities for action implemented by Indigenous Peoples themselves, including the transmission of traditional knowledge and practices to new generations. It concludes with the statement: “We recognize that we are facing threats, but we also affirm our spiritual connections and commitments for ongoing and future work to ensure our collective survival. We will continue to keep our hearts and minds strong, understanding that the work to protect the Salmon and our Indigenous ways of life begin with us.”

Read the Thank You Creator for Salmon Declaration at goo.gl/9GdTYN. Learn more about Keepers of the Earth Fund grant opportunities at cs.org/koef.