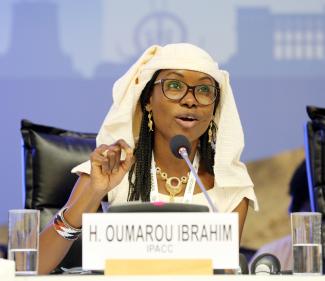 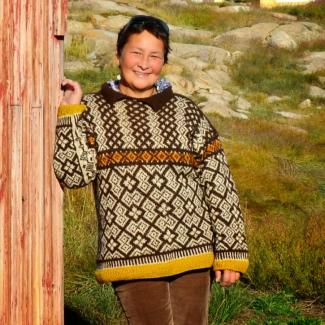 The following interviews were conducted with Indigenous leaders and activists from around the world in attendance at the Paris climate negotiations. We are thankful for their willingness to provide their perspectives.

I’m working on Indigenous Peoples’ rights on environmental protection and we are working with the three Rio Conventions on Biodiversity, Climate Change, and Desertification. In regards to climate change, the impacts that we are facing in the community is at two levels. First are the environmental impacts due to weather and seasonal changes. We have less rainy seasons, and we have more dry seasons, very long, sometimes up to nine months. In my community as Indigenous nomadic peoples, our ability to get to water and pasture is impacted by these changes. The second thing is the loss of species of vegetation and animals. The biodiversity is becoming less diverse in the last decade, and the problems are really increasing every single day. Every year is much more difficult than the years past.

The impact is also on humans and our lives as it is impacting food security. There are more conflicts between the communities facing climate impacts because of the reduced resources we are fighting for. It is also becoming a crossborder and interstate conflict, as well as a political problem because we are moving from our country to the neighboring countries. There are fewer resources, less economies, less revenue, and increasing health problems. We are really seeing the problems at the grassroots level.

My goal at COP 21 is firstly to continue to work on the political documents agreed upon with all seven regions of Indigenous Peoples. We have key messages: our first agreed upon message is to have Indigenous Peoples’ rights included in the document. Second is the recognition of Indigenous and traditional knowledge. Third is the participation in all levels of negotiations, but also in the implementation of any climate change projects. The last issue is the direct access of funding for and management by Indigenous Peoples. We are giving input at every negotiation and we are proposing the language for inclusion into the paragraphs being negotiated by the countries. We also are actively using the Indigenous Peoples’ Pavilion, where we have the biggest space to gather.

The next step is to see that the Paris Agreement includes all of our demands. Once we have that, Paris is not the end but just the beginning. Then we can see in Morocco (the site for the next COP) and ongoing how this Paris Agreement can be implemented, such as at the international level through negotiations with all of the relevant mechanisms. Also important is its implementation at the national and local levels, where it can reach the communities who are really being impacted by climate change. This agreement should help with adaptation, mitigation, and with early warning systems.

Professionally, my work is focused on researching the human dimensions of climate change, working closely with communities on the ground. They have a huge knowledge about the environment so that they can tell us what kind of differentiated changes are happening in their environment.

I think that civil society has been increasingly showing us what an individual can be doing in your daily life to help with climate change. Actions such as educating others, enlightening them as to how to live in a more modest way, teaching others about not spending too much energy, like putting the lights out when you are not in the room and sparing the water that you use. At the same time the population of the world is growing, and, in underdeveloped countries, where the population is growing much faster and their emissions follow this growing population, more statistics need to show where this kind of pollution is happening.

This COP reminds me of the one in Montreal [and] the one in Copenhagen, but of course I hope there will be better results this time because they are really needed. We can’t spend 12 more years without doing anything because the newest science is telling us we should be more alarmed because of the failing permafrost. For instance, methane emissions are two times more dangerous to the climate and to the atmosphere, which will mean that the changes to the climate will accelerate even more. I think we should take these issues much more seriously.