A few years ago, before the present wave of violence in Guatemala, I lived in a Mayan Indian community in the northwestern part of the country, an area where whole populations of Indian hamlets have been massacred in recent military operations. When I was there for a year in 1972-73 and the summer of 1975 the outlines of the present conflict were already forming. I spent most of my time in the small Indian community of Aguacatan in the Department of Huehuetenango. The history of events in Aguacatan were typical for the region. The community has since been caught in the bloody violence of today, and can help us understand the present turmoil in Guatemala.

In the village I spoke with numerous old people, both men and women, about how things used to be. Many Indians recounted that in the 1930s and 1940s the non-Indians, called Ladinos, treated Indians as if they were slaves or beasts of burden. I was told, for example, that Indians were expected to carry heavy loads over long distances for Ladino taskmasters; that Indian lands, livestock and produce were robbed by Ladinos; that Indian children were mistreated by Ladino teachers in the public schools; and that Indians spent most of their time working on distant coffee plantations. It is no surprise that Indians were even afraid to meet Ladinos on the road: any Ladino request was to be honored as a command. I remember talking to an old Indian couple in the presence of their children and grandchildren, and asking why people were so afraid. My question was followed by a long silence which probably reflected astonishment at my ignorance. Finally, the old woman blurted out, "We feared that they would strike us!"

The context of these conversations was always how horrible conditions had been for Indians and how Indians had suffered at the hands of the Ladinos, but no longer do. During the early 1970s, in fact, there seems to have been euphoria at the local level about how Indians had turned the tables on Ladinos. With great pride Indians told me about how their children now went to school and had learned to read and write. Indians now marketed their own crops through an agricultural cooperative, used chemical fertilizers to increase their yields, had their own political party, and had even elected one of their own to be mayor of the town. Many said that the Indians did not need the Ladinos any more. For Indians, in short, the past was bleak, the present much better, and the future one of hope.

In 1975, I also spoke with the non-Indian Ladinos of the village. The two wealthiest ones were older labor contractors. They specialized in recruiting Indians to work on the coffee plantations which were some distance away toward the Pacific coast. The wealthy contractors remembered the "good old days" as really good. Old Don Solomon ("Don" is a term of respect) explained how the local government used to help his business. He told me that Indians were lazy and sly, and if you wanted to get work out of them, they had to be dealt with severely. In the "good old days" if an Indian contracted to work for three months on the plantations, but then failed to report, the local police would be sent out to track him down, arrest him, and then fine him to do hard labor on the roads, after which he would still have to work his stint on the plantation. Now, Solomon lamented, he has to hire someone to look for the no-shows and threaten them with the blacklist he maintains.

Solomon's wife also regretted the passing of better days because Indians used to have such quaint customs. The men wore a kind of breechclout instead of western-style pants; they used a certain kind of berry instead of soap; and it was amusing to see how frightened and awed Indians were when something modern would come to town, like when her family had brought the first car to town.

Don David, the oldest and wealthiest labor contractor, not only lamented the loss of the "good old days," but also warned younger Ladinos about the future. "If you are not careful," he once said, "you will be ruled by the mules." He meant, of course, the Indians, beasts of burden.

The Indians, too, had their terms of disrespect. They referred to the Ladinos as "dogs" or as "vultures." They called them dogs because just as dogs will sneak into your house and steal food, so Ladinos steal from Indians. And just as vultures will eat any food, good or bad, Ladinos have no sense of right and wrong.

To summarize the racial feeling in Aguacatan in the early 1970s, we can characterize it as one of great tension between Indian and non-Indian. This tension seems to have been rooted in a growth of Indian capacity and pride and a corresponding erosion of Ladino dominance over the Indian. After I left Guatemala in 1975 I found that other anthropologists who had done research at about the same time noted the same burst of Indian pride and increased racial tension.

The changes which led to the reversal of the Indian position are a type of civil rights movement. In several respects it was similar to the one with which we are familiar in the United States.

First, Indians formerly worked under a system of forced labor something like slavery, but then were freed from it by changes in national laws. In Guatemala the last system of forced labor was established through what were called the Vagrancy Laws, which declared that people with little land were "vagrants" and compelled them to work on the plantations. The emancipation from these laws did not come for Guatemala's Indians until 1944.

Second, after World War II massive economic changes in the countryside caused Indians to find new strategies for survival within the nation. Population growth on very limited landholdings forced Indian families to try to make their lands produce more by irrigating, fertilizing, and planting new crops. Cash crops increasingly supplemented the basic subsistence crops - corn, beans and squash. Meanwhile, other families left their lands and communities to seek permanent work on plantations or in cities. Finally, some also took their families to frontier colonies which were being established in the sparsely inhabited territories to the north.

Third, Indians began to organize themselves within new Christian churches. Catholic Maryknoll missionaries and Protestant Bible translators began pouring into the Indian highlands in the mid-1950s. With missionary help Indians established new schools and agricultural cooperatives. More technical, medical and legal assistance was made available. The newly founded churches and organizations brought forth a new Indian leadership, and these new leaders were better educated and more confident. After all, in the eyes of God, Indians and Ladinos were equal.

Fourth, by the mid-1960s the success of the new Indian economic strategies and social organizations was gradually converted into increased political power. At first, Indians demanded more say in selecting local candidates, and more turned out to vote, but soon Indians took over local political parties in order to run and elect Indian candidates. Eventually, Indians also joined peasant leagues which linked the rural workers both within and outside the plantation zone. This kind of unity was unprecedented and held great political and economic potential.

All of these developments have parallels in the history of the Black civil rights movement in the United States, but there are two very important differences. First, in Guatemala the subordinate racial group constitutes about half of the national population. Second, while in the United States the poor have tended to divide against each other along racial lines, in Guatemala many impoverished Ladinos have found it advantageous to join with the Indian's in their economic strategies and political causes. Both of these differences mean that the Guatemalan Indian civil rights movement is potentially much more powerful as a national force in Guatemala than the Black movement was in the United States.

Today, Guatemala is witnessing the explosion which was clearly latent in the early 1970s. We may ask just what triggered it. I do not believe that tensions between Indians and Ladinos at the local village level can account for it. Instead, the economic strategies of the Indians ultimately came into conflict with the development plans of the most wealthy and powerful of the nation. Indian participation in peasant for higher wages on the plantations was a direct threat to the earnings of Guatemalan elites and foreign investors. Similarly, the sparsely populated northern zone of the country was found to contain important mineral deposits, including oil and mineral ores. Also, parts of the same region could be cleared to establish lucrative cattle ranches.

The subsistence farms of the Indians were in the way of "economic progress" for the wealthy. Significantly, the first large-scale massacre of Indians by the Guatemalan army occurred in this northern territory, as Indian families attempted to petition respect for their landholdings against the inroads of a mining company. This was the famous 1979 massacre at Panzos, where over a hundred men, women and children were gunned down in cold blood.

This massacre was merely the beginning of an explosion of violence against Indians. In villages across the highlands, locals who had seen their position eroded by the new Indian economic success, education, and organization found their opportunity to strike back and reassert their dominance, now backed by the national elite, army and government. In small villages across the highlands the death lists were drawn up and the executions begun. The preferred victims were the same Indian leaders associated with the churches, the schools the agricultural co-ops and the peasant leagues. In Aguacatan, for example, Pla's Ne' was one of the victims. He was a Protestant pastor, school teacher, and active member of the agricultural cooperative.

As Indians began to turn to the guerrillas in order to protect themselves, the viciousness and extent of the violence grew. Finally, the military campaigns of the Rios Montt government have brought unprecedented misery to the countryside by bombing villages and burning fields, thereby displacing hundreds of thousands of Indians. I doubt that the new strategic hamlets will end the Indian civil rights movement. In 1983 the Indian struggle for social equality and economic survival is being transformed into a civil and revolutionary war. 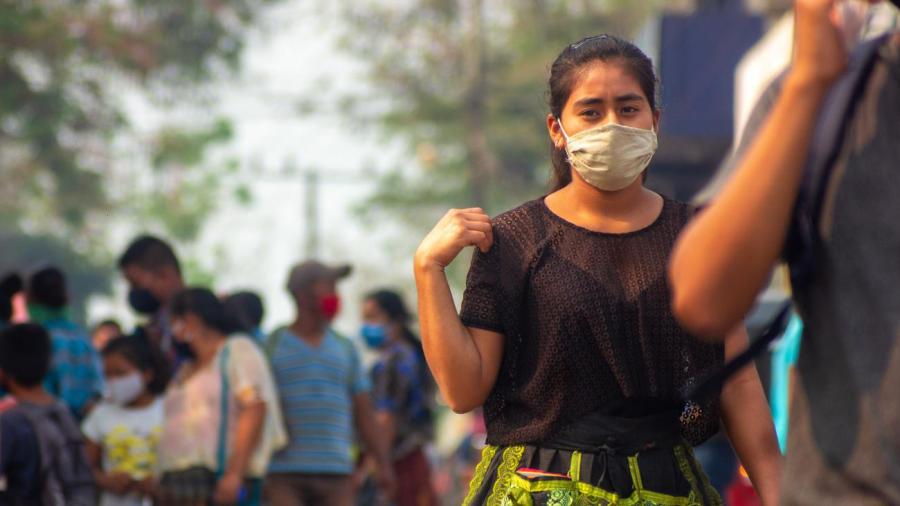 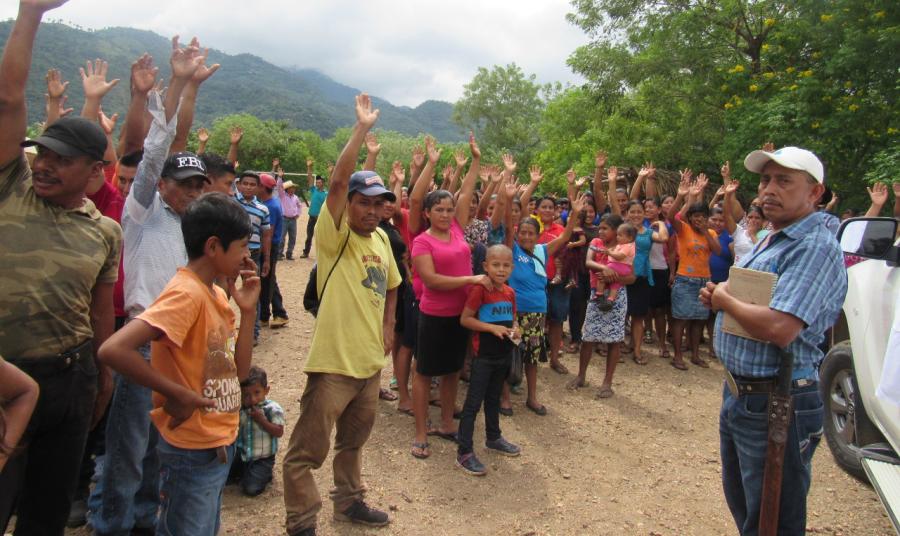