Gender Equity from the Principles of Indigenous Kichwa Realities 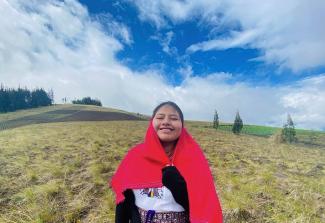 The debate around gender equity was not initiated solely in the West. Among Indigenous Andean Peoples, the Kichwa hold their own concepts that explore feminine and masculine energies and gender roles—principles that are challenged by the widespread internalization of colonialism and Christianity by many Indigenous communities.

“It is important to rethink the term ‘gender’ as a Western and anthropocentric trend; for many [it is] Eurocentric,” says anthropologist Sammia Quisintuña (Kichwa Chibuleo-Salasaka). Indigenous Peoples in Latin America have records from tens of thousands of years before the common era. Their own history, territorial characteristics, and worldviews enrich the discourse about gender and expand the spectrum of the predominant debate in the media.

Yanantin is the principle of complementary duality. “It is to think of the runa [Indigenous person] not only according to their genital parts, but also to include the entire Pachamama and its sentient entities,” says Quisintuña. To speak of complementary duality is to understand the existence of two energies—male and female—that can coexist in balance in the same being. The most prominent symbolic example is the chakana (Inca Cross), whose structure represents masculine and feminine energy and symbolizes the dynamic between the universe and the life it contains. For Andean Peoples, this symbol represents the life cycle, and therefore is a reflection of how the world is conceived.

The Yanantin also tells us that these energies are present in human beings, animals, plants, mountains, and beings that surround us. “All entities have that energy to a certain extent and percentage,” Quisintuña says. Quisintuña is from the town of Salasaka, a territory sheltered by nature and sacred places. It is common to see ceremonies and personal rites in these mountains in search of favors from Pachamama, and gender characteristics are even attributed to it. The Andean world also recognizes a third gender, kari-warmi. Kari-warmi is similar in principle to the chacha-warmi (male/female complementary concepts)— affirmation that there were pre-Columbian realities in which gender roles were not so marked and segregated.

Within these pre-Columbian historical records are the existence of women caciques and women curacas who would lead a community. These are authorities who administratively and politically direct the community, both in pre-Columbian times and in the conquest. But at the same time they maintained marked and extensive patriarchal practices within the communities that continue to the present. Quisintuña points out that this is reflected in gender roles such as childcare being the exclusive domain of women, and in the role of paternal authority within the family.

Twenty years ago, it was unthinkable for a woman to be a member of cabildo (town council), a position historically occupied exclusively by men, but collective processes have changed and women now are reclaiming these spaces. Little by little, women have been chosen to chair commissions, lead projects, and hold the highest dignity of president of the cabildo. This person should enjoy support, respect and high integrity within the community. Today, it is still taboo to speak of sexual and gender diversity in many Kichwa communities. “They are going to infect everyone. We are going to disappear. It is like a disease. We are going to become extinct,” are phrases that Quisintuña says she has commonly heard in Indigenous territories, and that for a marked majority in her town, “Warmi is Warmi and Kari is Kari” (a woman is a woman and a man is a man).

Within the history of the Indigenous Peoples in Abya Yala, it is necessary to recognize and celebrate the existence of wise people with both female and male energies who have been part of the communities. “It is important to think about them, discuss them… think about how they can work today. Because we are not like before. Our Ayllus (families or communities) are not small, we do not have agrarian economies, and there are many Indigenous people in the cities,” Quisintuña says. Change will only stem from an honest acknowledgment of reality.


Photo: Sammia Quisintuña has a Master’s degree in Anthropology from the Center for Research and Higher Studies in Social Anthropology in Mexico.