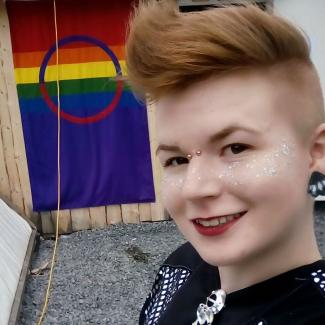 I really wanted to come to the United Nations Permanent Forum to meet other Indigenous Peoples, especially those who are queer, as I am. When thinking about the Sámi community, we are often very silent about queer issues and it is often forgotten that we exist. We are still a bit of a taboo in our community, but the situation is getting better. There have been five Sápmi Pride events for us queer Sámi people, and it’s something we really need to keep going strong because it’s really empowering for us.

People easily assume that we are heterosexual or cisgendered. For me personally, I’m pansexual, so gender doesn’t matter to me. I have dated men before. Maybe that’s one reason why people have taken me as a straight person. When I started organizing Sápmi Pride in 2017, that was the moment when I really came out of the closet, even though I wasn’t really hiding it before. People just assumed that I was straight because I was dating men. My family is good and I have a lot of friends surrounding me. I know that it has been a lot harder for many of my friends. This silence is the hardest thing for many of us. It can be even worse than receiving verbal discrimination.

Among some of my friends and in my own experiences, I am usually not asked how my partner is doing, but I know that straight people get asked that often. It is this silence that we need to break. We need to be more open. I know that there are a lot of people who are not homophobic or transphobic, but they are not showing their support either. Maybe that’s something everyone could do—be an open supporter. When it comes to Finland, we need a new trans law because in Finland trans people still need to get sterilized [before they can legally change their gender].

I was really inspired by the previous organizers of Sápmi Pride, the ones who started it. I have been proud to continue their work. I’m really inspired whenever someone raises Indigenous queer issues. It hasn’t been just me here at the Permanent Forum. I have heard some statements about Two-Spirit people and LGBTQIA+ people and I’m really happy that I’m not the only one here that raises them. We are still here, and together we are strong.

--Anne Olli is Sámi from Finland.