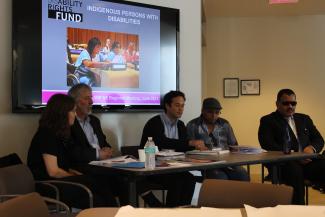 Indigenous Peoples are too often thought of and referred to a homogeneous group, when in reality there are many subgroups and cross-sections within Indigenous communities. The International Funders for Indigenous Peoples’ (IFIP) regional gathering on June 5, hosted at the Boston Foundation, challenged funders to look closer—to focus specifically on Indigenous LGBTQ and Indigenous people with disabilities, and to consider Indigenous traditional knowledge as solutions to climate change. IFIP works with a network of 50 foundations, bringing together Indigenous leaders and funders to talk about critical change. Approximately 50 participants, including Indigenous leaders, the New England International Donors, Funders for LGBTQ Issues, The Boston Foundation, New England Biolabs Foundation, and the Disability Rights Fund were challenged to consider how philanthropy could support Indigenous Peoples who are at intersections of oppression: women, the disability community, rural communities, and LGBTQ persons.

In her opening remarks, Myrna Cunningham (Miskita) asked the world to use Indigenous voices to speak about Indigenous issues, to remember that Indigenous peoples have collective rights and want to be recognized as peoples and included in international standards, and that culture is an important element for development. “We are human rights holders and should guide how funds are allocated. Now, we are in the era of implementing human rights,” she said. She urged funders to consider innovative ways of creating change where women’s capacity to negotiate can be shifted and customary law influenced.

The morning workshop, Indigenous Wisdom and Adapting to Climate Change: Moving Towards Resilience, was led by three dynamic Indigenous climate justice leaders: Katya Wassillie (Yup’ik/Iñupiaq) of the Eskimo Walrus Commission in Alaska; Carla Garcia (Garifuna) of the Black Fraternal Organization of Honduras (OFRANEH); and Greg Ch’oc (Q’eqchi’ Maya) of the Sarstoon Temash Institute for Indigenous Management (SATIIM) of Belize. “Resilience is coping, but also about having more choices to survive,” said Ch’oc, referring to how his community of San Miguel, Toledo is dealing with food security, resource management, and land tenure security advocacy. Maya communities have been reintroducing traditional systems of cultivation of crops to strengthen existing systems, such as organic farming, mulching, composting, earthworm cultivation, and reintroduction of microorganisms from rainforest to fields.

Wassillie spoke of the challenges climate change poses to subsistence hunting and fishing in Alaska. “Our traditions say only take what you need, do not waste. Walrus is more than food for survival; it is a way of life, it is about coexistence with the environment.” The Eskimo Walrus Commission has been working on an effort at the local level in two of their communities, and possibly more through a project funded by the Oak Foundation, to develop local marine mammal ordinances with trip limits. “We need to increase the capacity of local organizations because it is difficult to sit at the same table as government officials if you don’t have the resources,” she said.

Lastly, Garcia spoke of the land title challenges her community in Honduras has been facing for over 40 years, recently worsened by coastal erosion caused by climate change and rising sea levels. “Land is the mother for Garifuna community,” she said. “Land is important. Without land, we cannot give life. We are losing our ecosystem and our communities.” For Garcia, working to recover lands to move communities is an urgent priority, as is stopping deforestation caused by large scale development projects that were designed without community consultation. Indigenous communities in Honduras are also being affected by rivers drying up due to hydro dams. “Ask us how to develop territories and our futures,” she said. “We know how to take care of land and live with land.”

The afternoon session, Indigenous Rights Funding at the Margins: Advancing the Rights of Indigenous Persons with Disabilities and Indigenous LGBTQ Communities, addressed the two historically marginalized groups within Indigenous rights movements, examining trends, opportunities, and gaps in foundation funding and how funding can address the intersectionality of multiple identities. It also proposed strategies for working across movements to advance the rights of all Indigenous Peoples. Panelists presented their experiences along with practical recommendations for funders, including the involvement of persons with disabilities and LGBTQ people in any decision-making relating to them: “Nothing about us, without us.”

Lisa Adams of the Disability Rights Fund and Naa Hammond of Funders for LGBTQ Issues gave an overview of the funding landscape. Only 20 percent of global funding goes to human rights issues, and of that, only 5 percent is allocated to LGBTQ issues, 4 percent to disabilities, and 3 percent to Indigenous Peoples. There is a gap in taking a cross-sectional approach in funding. Compared to the general population, Indigenous LGBTQ persons disproportionately live in poverty, face physical violence and discrimination, miss more school, are at a higher risk for HIV, have limited access to justice, and suffer higher rates of suicide.

“There is limited support and recognition of LGBTQ. Some view LGBTQ issues as external to Indigenous communities. There is rejection by problem. Indigenous LGBTQ persons are working within complex situations and at the intersections of several movements,” said Luis Diaz-Albertini of American Jewish World Service, which is currently the only global funder for Indigenous LGBTQ issues. Diaz-Albertini mentioned several ways of increasing inclusiveness, such as creating knowledge through trainings; finding and connecting to LGBTQ groups; sharing requests for proposals; and partnering with other funders in the field.

Luis Emilio Ayllon Martinez of Equidad TLGB, the first, and at present, only, organization of LGBT persons in Oruro, Bolivia. In Bolivia’s recent national elections, the Green Party selected Martinez as a candidate for the national legislature. Although he was not elected, he was the first openly gay national candidate who achieved a qualifying percentage of votes. “Bolivia is in a new period with an Indigenous president who has worked with the social movement. And there is a new constitution with local autonomy. They are always waving the flag of non-discrimination, but LBGTQ and women are not in the discussion,” he said. His recommendation to funders: “Support work in the small towns and cities, because all the funding goes to the big cities.” He also urged funders to focus on the trans population, who have no access to education and employment and are in dire need of training and support.

Setareki Macanawai of the Pacific Disability Forum and Indigenous Persons with Disabilities Global Network in Fiji underscored the urgency of such grim statistics: “The movement of Indigenous persons with disabilities is fairly new and fairly young; we don’t necessarily know where we are heading. We share our story from two sides: Indigenous and disability. It is almost an identity crisis. We want to be seen, heard, and counted, and have the resources to participate.” Macanawai called on funders to support those who are doing the work but may not have credentials or a long track record. “Take a risk to bring our issues to the forefront,” he said. “Tell our stories to benefit those who are locked up in their houses, that cannot access school services. Invest in marginalized communities. At the end of the day, we are human beings and we want to enjoy life.”